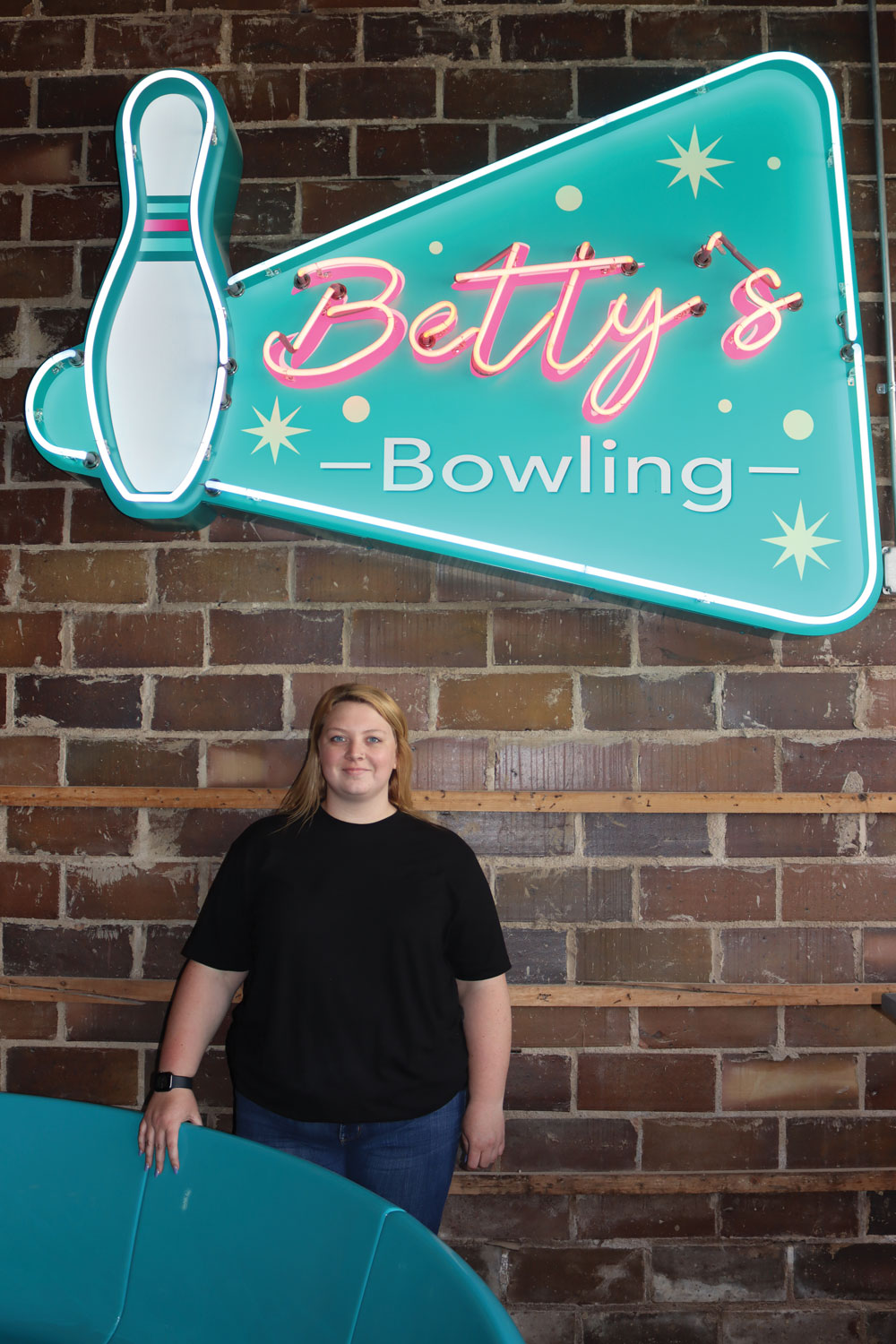 A hub of activity for over 70 years, a popular spot in downtown Lakefield received a facelift this past year. Dudley’s Garage opened its doors June 18 during Lakefield’s Summerfest to a swarm of excited customers.

The charm of yesterday fill the walls of Dudley’s Garage. Formerly known as Hage’s Oil and Bowlers Inn and built in 1947 by Henry Hage, Jim and Tresa Hussong purchased the property from Nick Hage and Tim Smith in 2020. With the expertise of Jay Fagen and his crew at Fagen Construction, Lakefield’s new restaurant is brand new within an old shell.

“We always liked the building and had ideas for it. When it came up for sale last year, we thought we should put those ideas into action. We wanted to fix it up and give back to the town we love, Lakefield,” said Jim.

High school sweethearts and graduates of Lakefield High School, the couple married in 1985. Jim joined his father Dudley full time in 1984 at the family’s company, Kozy Heat Fireplaces, on the southeast side of Lakefield. Two of their daughters, Heather and Hannah, became third generation contributors in 2013-2014.

The new restaurant, Dudley’s Garage, is in honor of Jim’s father. Betty’s Bowling is named after his mother.

“My dad is still living and loved the idea of the restaurant,” Jim said. “He said, ‘We have a butcher, baker, and a fireplace maker in town. Now a bowling alley.’”

The Transformation
Jim hired Jay Fagen of Fagen Construction in Spirit Lake to oversee the year-long process. The two men have known each other for over 17 years and been a part of two home builds, a remodel and now a business transformation.

“We first met on a house I was building, and I saw a couple peering through the side windows­­­—their eyes big. I had just put the house up on the market that morning, so I show them around and they are loving what they’re seeing. I recognized him but didn’t remember his name. They said they loved the house and wanted to buy it, and they really loved the fireplaces I had chosen,” Jay shared. “He said ‘Those fireplaces are Kozy Heat, where I’m the vice president. My dad is close to retiring and I’ll be the president shortly.’ It’s a good thing I picked the right fireplaces for that house.”

From there, Jay’s crew has built another house and remodeled a lake home for the Hussong family. Fagen Construction was a part of the makeover at Dudley’s Garage from start to finish.

“When the Hussong’s talk about their vision, I’ve been around them long enough to know what they like, and I understand what they’re thinking, which really helped,” Jay said. “It also helps that I really like the rustic retro style they chose. They listened to my input, and many times we were on the same page, but just explained it differently.”

It took over two months for demolition; the crew took out 25 dumpster loads of materials. They then moved to replacing the entire roof and removing the wall in-between the bowling alley and restaurant.

“It was a little doorway where the ramp was, the rest of it was wall,” Jay explained. “We opened it up 10 feet wide and took out the wall, creating a lot more room between the two spaces.”

In place of a wall, there is a large walking and sitting area, arcade, and a long table running the width. Stools line the table allowing viewers to watch the bowling action.

“We call it Heckler’s Row, as they can tease the bowlers,” Jim added.

The ceilings were raised to twenty feet and all the electric, plumbing, and sewer lines were updated. The support walls in the basement were reframed and strengthened under the kitchen, and they increased the kitchen space from 300 square feet to 1,200 by remodeling the attached house and combining it with the kitchen.

There have been a few hiccups along the way, as they hunt down old piping and lines. Recently, they discovered a water leak was due to an old hidden joint in a wall that had a nail through it. Jim also brought in a large crane to put in a new HVC system and air conditioning units on the roof.

The Hussong’s found rustic dock wood from the Iowa Great Lakes to use on the main walls of the restaurant and greeting area.

“One of my favorite parts of the restaurant was being able to work with the rustic wood and turn something that was originally plain jane and transform the walls into something unique and original. Now, the walls talk with history, especially after the pictures are hung and the garage doors are back in place,” Jay said. “It reminds me of a time when you’d drive over the air hose and the bell would ding inside the service shop.”

The counter is one of the old bowling lanes that Jay sanded and refinished. The benches near the arcade were once blue. When they stripped them down and refinished the wood, they discovered they were original benches from the train depot in town and used in the 1920s.

Jim said the Hamm signs hung along the bricks of Betty’s Bowling are from the 1950s. The corrugated cardboard is in good condition and initially was all one big sign.

“The signs were kept really well. In order to hang them, we had to cut them apart to fit in the spaces,” he added.

The space was initially a Phillips 66 gas and service station, house, and then also a bowling alley. Henry Hage opened it in 1947, and in his spare hour, built all the brick lining the bowling alley.

“He would work long hours making blocks—what a commitment he had to building this space,” Jim shared.

The bathrooms were redone, with Laura Fagen wall papering and painting the walls. The grill lining the back of the bar is off a 1955 Cadillac. The original vents on the roof were taken off and transformed into lights in the restaurant and the United States steel flag was built at Kozy Heat.

They added the original garage doors to the front of the restaurant, with a few skid marks on the concrete as added charm. Pictures of the Hage’s fill the walls, as well as rustic signs and old truck hub caps.

With a larger kitchen that has added space for salad prep and storage, there is potential for future catering. There are all new appliances, and the space has all been reorganized to be more efficient. There is a walk-in freezer and cooler in the back.

Chef Jager is excited about the menu and calls it an upscale BBQ with fine dining options.

There will be a Sunday Brunch offered and live music out on the patio on the weekends.

Hours for Dudley’s Garage will be Tuesday-Thursday 11 a.m. to 9 p.m., Friday–Saturday noon to midnight, and Sunday Buffet Brunch is 10 a.m. to 3 p.m.

The restaurant will be open year-round and has capacity for 175 guests, when the patio is open. Bowling League will start in late summer.

“We had so much fun creating the menu and finding unique things to add to the restaurant. Jim and I are foodies who love going places and being creative, so we added a lot of our favorites,” Tresa said. “We want to add something special to the Lakefield community with Dudley’s Garage, adding to the other special shops in town.”

Special cheesecakes are being made by Simply Cheesecake in Lakefield, while microgreens come from Cherry Lane Farms down the road. The Butcher Shop will provide meat, and Z’s Bakery will be making the buns and breads. Tresa also found neat soaps at nearby GiGi’s to add to the restaurant.

The transformation of Dudley’s Garage was a year-long process, but the makeover has been well worth the wait. Recently, Jay walked through after the decorating pieces were added and he was wowed.

“I got goosebumps looking at everything. I’ve been here from the start and to see the final touches was overwhelming. I kept saying ‘Wow!’” he shared. “It was really neat to bring this service station back to life.”

The vision Jim and Tresa had at the start for Dudley’s Garage is a gift to Lakefield and the surrounding community.

“This has all been community-driven and not for us,” Jim added. “This is for Lakefield and a place we hope many visit.”