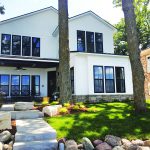 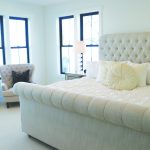 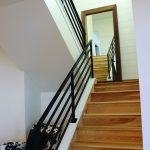 The gorgeous white lines found throughout Chip and Jeannie Goodwin’s home near Pocahontas Point are their haven amongst life’s craziness. This summer home is a retreat for their family of four, located alongside the blue waters of West Lake Okoboji.

However, the building didn’t start this way. In fact, in the fall of 2017, the property was in need of a major facelift.

“We wanted a place where we could relax as a family,” Jeannie said. “Chip’s dad had a place in the Iowa Great Lakes area for 30 years but it had a high bank. We desired a location where we could walk out to the water's edge.”

The couple looked at a variety of homes around the lake, but also wanted a place protected from the wind.

“Dixon Beach gets the wind from the south and can have rough and windy waters,” Chip said. “I liked Miller’s Bay and Pocahontas Point because they do not get a lot of wind since those two bays are both protected.”

Goodwin’s hired Dan and Derek Lee of Lee Custom Homes to remodel the summer residence located along Okoboji Boulevard. Initially, the plan was to remodel the existing home, until they realized there wasn’t a solid foundation.

During the fall of 2017, the walls were torn down and the existing plan was used as a footprint. The framing was put up in November, and the home was completed by Memorial Weekend 2018.

“It was a big deal to have the home done by the summer season, and Lee Custom Homes did a remarkable job of getting it transformed into a beautiful place for us to enjoy,” Chip said. “The neighbors were also so supportive and accommodating throughout the entire process.”

Building a home within a tight time frame didn’t come without its share of challenges. Work sometimes took place in less than ideal weather conditions. “It was time management,” Dan Lee said. “We sided on blustery days, and there were other days where we didn’t leave until a particular job was done, despite the time.”

Another complication was the close proximity to nearby properties. The crew had no ability to move in any machinery on the east side of the home.

“It was some creative thinking in how we completed our work on that side of the home,” Dan said. “Basically, we used a variety of ladders and scaffolding.”

Delivery trucks also had to creatively back in and out along the dead end street.

Open Contemporary Look
Jeannie desired a home with a contemporary look. She wanted the space to be welcoming and open. Her focal point was the kitchen, as this is a place where she wanted people to gather. Chip’s focus was the creation of a patio where he could relax, at times work, and enjoy the outdoors.

Dan and Derek took their ideas and worked within the parameters of the home. At times, they added their own suggestions. For instance, they recommended turning the island and the staircase to their current directions.

“In the kitchen, once the space was framed up Dan and I made templates on the floor so Chip and Jeanie could see how the room would work both ways,” Derek said. “By turning the island like we did, they were able to add two extra stools on the side and it gave them more space for the dining table. With the stairs, we flipped the bottom side because it opened up the space between the kitchen and the entry.”

The home is 2,800 square feet and has four bedrooms and 3.5 bathrooms.

There are barn doors in several places throughout the home, which Jeannie loves. When open, they contribute to the open concept.

Chip also loves the openness and how the main areas focus on the lake. There are large windows facing the lake in the kitchen and living room, with doors walking out to the patio. Upstairs in the master bedroom and bath, both rooms face the gorgeous blue waters of West Lake.

The entire home is filled with big windows, flooding the rooms with bright sunshine throughout the year.

Local Vendors Provide the Materials
Throughout the residence, all of the materials were obtained from local vendors. The lumber, siding, roofing and millwork all came from Consumers Lumber in Spirit Lake. The windows are Andersen and were purchased from Cooperative Farmers Elevator (CFE) Lumber in Spirit Lake, while the Omega Kitchen Cabinets also came from CFE’s Home and Kitchen Design Studio in Okoboji.

“Taylor Roede from CFE was so helpful when we were deciding different design aspects of the home, especially in the kitchen,” Jeannie said. “I never would’ve thought of the knife drawer or added storage under the trash can space.”

The hickory flooring throughout the home came from Okoboji Tile Shop and Mr B’s in Spencer. The gorgeous countertops are MSI quartz from Kruse’s Natural Stone in Spencer.

“Dan and Derek referred us to the appropriate people at all of the businesses and everyone was so helpful,” Jeannie said. “They guided us through the selection process and helped us find the pieces to complete the look we were wanting.” 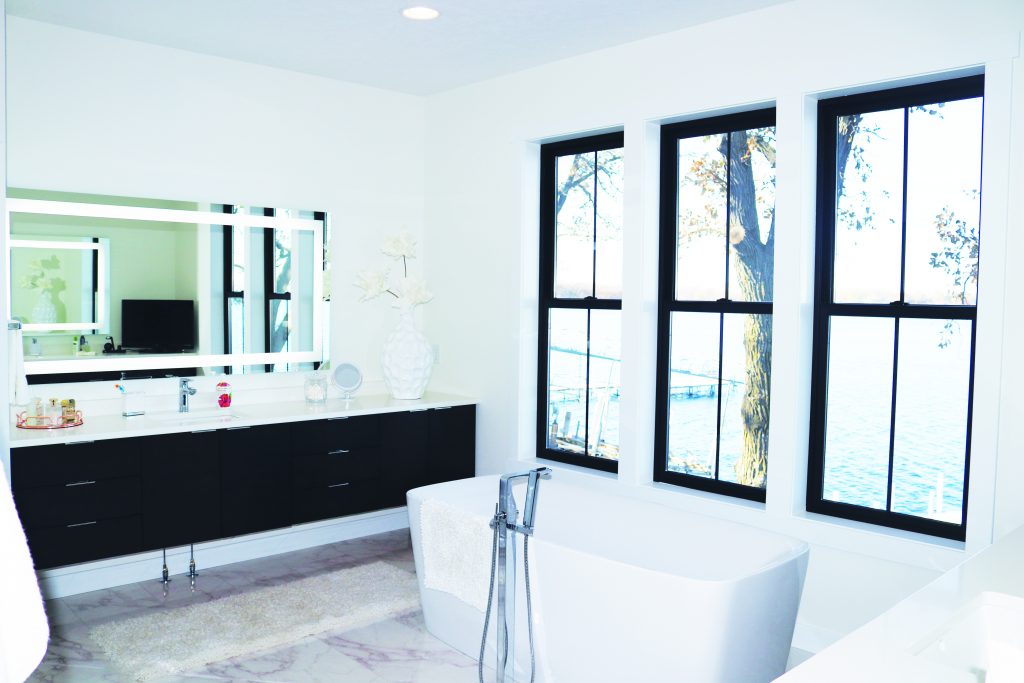 Master Bathroom — The entire main floor has in-floor heat, as well as the master bath on the second floor. The Lees surprised the homeowners with radiant floor heat in the upstairs bathroom. The master bathroom is quite the masterpiece in itself. The free standing tub overlooks the lake, with a line of sinks and cabinetry on either side of the room. On the opposite side, a shower aligns the wall. “I saw the tub and knew our home would need it,” Jeannie said. Derek said in the master bath they played with lots of different layouts after the windows were in. “The goal was to maximize the lake view and have both a big freestanding tub and large walk-in shower,” he said. “We ended up with a design that has lake views from both the tub and shower, with big his and hers vanities.”

Kitchen Masterpiece
The kitchen centerpiece is the gorgeous MSI quartz island that draws people to the space. There is storage space from one end of the island to the other. While much of the house is in white, the kitchen has a blue/gray color backsplash.

“We actually thought we were getting white, but when it went on the wall, the backsplash takes on the reflection of the lake,” Jeannie said. “It takes on a blue/gray look, but we actually really like how it brings it all together.”

The backsplash runs the entire length of both walls, creating a homey feel within the open concept.

Living Room Space
Around the corner from the kitchen, a welcoming haven for guests awaits. On the ceiling, the uniqueness of the fan is a conversation starter. Along the wall, there is a hidden bar the Goodwin’s are glad they added.

From there, easy access to the outdoor patio is available. Chip loves being able to relax along the lake. There are patio heaters and a TV above a two-sided fireplace.

“We just love the lake type environment the home gives us,” he said. “It is a place where our family can relax and enjoy.”

While the home will mainly be a summer residence for the Goodwin’s, they plan on enjoying it several weekends throughout the winter months. Chip and Jeannie also want it to be a haven for their daughters, Haley and Riley.

Lee Custom Homes
Dan and Derek Lee started Lee Custom Homes during the summer of 2014. Their first project together was a spec home in Country Acres Estates. From there, they have established their business and are known for their high quality detail work.

“We grew up spending summers at the Lakes and knew it would be a great place to start our business together,” Derek said. “After completing our first home, we have slowly built our business over the last five years with a focus on quality and customer service.”

Prior to Lee Custom Homes, Dan was doing construction and remodeling from Storm Lake to Sioux City. Derek worked in commercial real estate in Minneapolis.

The brothers combined their strengths and oversee different aspects of a home build. Dan enjoys the building and custom finish work—the more creative and detailed the better. He supervises the crews and is focused on day-to-day project management and running the job sites.

While Dan is very hands-on with the construction work, Derek enjoys helping the homeowners with the floor plan and home design.

“We can do some really neat things with 3D models now, so our clients can really get a feel for their new home before we start building,” he said.

Derek is the Vice President for the Home Builders Association of NW Iowa.

Lee Custom Homes focus ranges from new construction building to renovation projects, handling all aspects of the job, from the designing to the building. For more information, contact Dan and Derek Lee at (712) 339-1997.

The Goodwin's are so thankful how these brothers took their ideas and transformed them into reality. For the Lee's, while the Goodwin's started as customer's they developed a great relationship and now are great friends.