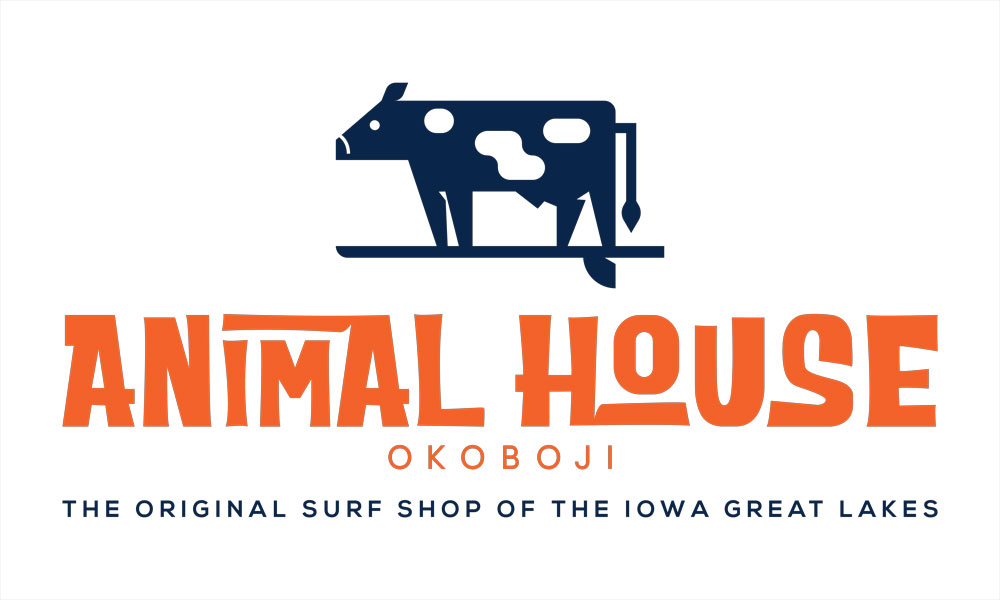 Growing up, Steve Strom never imagined retail sales in his future. The Jackson, MN native went to college for teaching, completed student teaching, and was focused on impacting children.

However, when he was in high school, he remembers standing in the middle of the Animal House and daydreaming, “this would be cool to own someday.”

At the same time, Steve didn’t want to become the third Strom generation following in the family’s footsteps.

Following in the Family’s Footsteps

The Strom’s have been in the retail industry since 1962, beginning with Steve's grandfather Neale Strom, who opened Strom's Clothing in Jackson. Steve's father Brad followed in his dad's footsteps by taking over the family business in 1989.

“I remember hearing my dad and his story with Grandpa; he knew in high school that he was going to take over the family business,” Steve said. “In high school, I said I’m not going to work for you, but God had a different plan.”

During Steve’s college years, the Strom family continued to operate Strom’s in Jackson. However, they started branching out when a retail space became open in the Central Emporium in 2006, and Brad’s Bungalows opened on the top floor.

Brad asked Steve to manage the store; he was quickly trained and began helping customers in the Emporium. “I grew up a lot that summer,” he said. “I felt the responsibility of being part of the family business and wanted to make my parents proud. They trusted me and they asked me to come back for the next summer.”

It was that summer when a For Sale sign appeared on the Animal House’s doors.

“I called my parents right away in excitement and they put in an offer and purchased it in 2007,” Steve said. “I never imagined my dream from high school would actually happen!” Steve ran the Animal House and Brad’s Bungalow.

Steve graduated from college in December 2009, but instead of going into teaching Steve returned to Jackson and became a vital part of the family business as he prepared for the coming summer.

During the course of the summer, Brad asked Steve to assume the role of buyer and manager of the Animal House.

"I was excited to contribute to the family business and work towards fulfilling my dreams of running the Animal House," Steve said.

As the years went on, Steve learned how the business ran from the inside out. He developed his own systems, as he learned what worked. Steve enjoyed the stores in the Emporium, as they were geared more towards his clothing style and taste level, especially since he was still in college when he started.

“I was able to work with my dad and watch how great of business people my parents are and continued on that family legacy. I learned so much," Steve said. "There is pride in carrying on the family tradition. This is where God wants me to be.”

Managing the Animal House since 2007, Steve has always seen the potential for more.

“It’s one of the best locations in the area but we felt trapped because of the limited space,” he said. “Every year, my staff would ask me when we were going to expand. We even considered going to a different location.”

An opportunity became available when Butch Parks became the new landlord for the Central Emporium in 2017.

“I love working with Butch; he’s a dreamer and an idea guy!” Steve said.

There was some unused space next to the Animal House and Parks agreed to have a wall knocked down and the store gained its needed space.

Steve said that Butch and his team were great to work with to bring it all together.

There was a lot of hard work that went into the transformation between 2017 and 2018 seasons. However, since Steve had been developing ideas of an expansion since 2010, the ideas and plans were already created.

Vendors jumped in and supported the process, especially Reef representative Bill Linsmayer who spent a 12-hour day building a Reef wall on one side of the shop.

Family friends, Mel Peterson and Randy Graff, were also huge components of the expansion, as well as Steve’s brother Matthew, who came home on weekends from college to help. 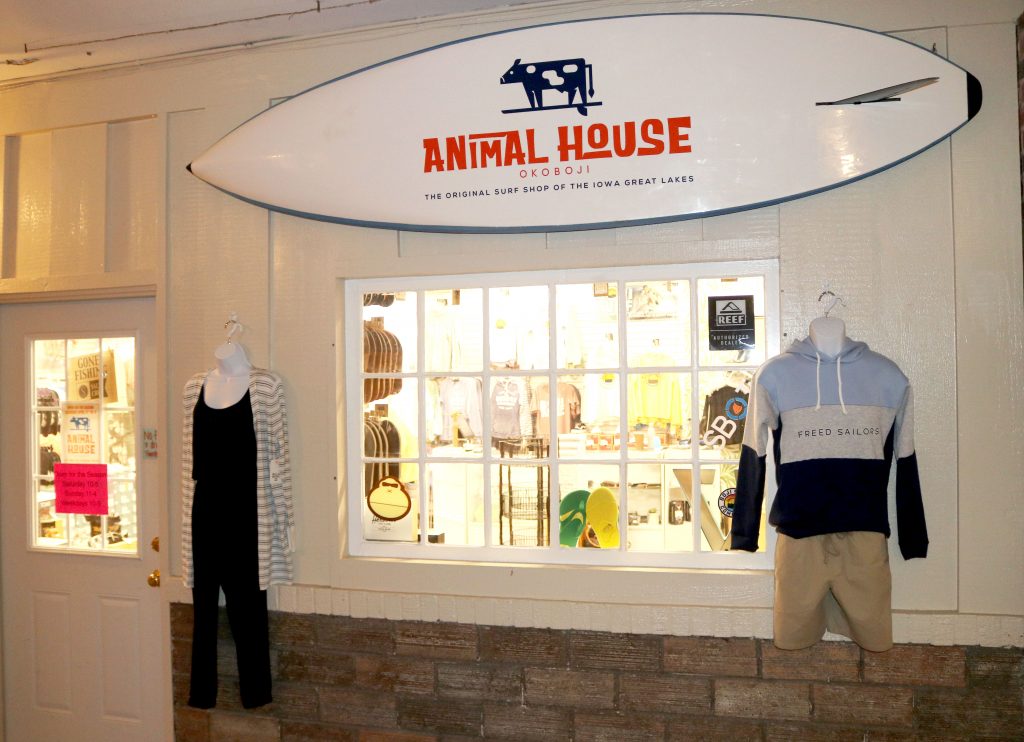 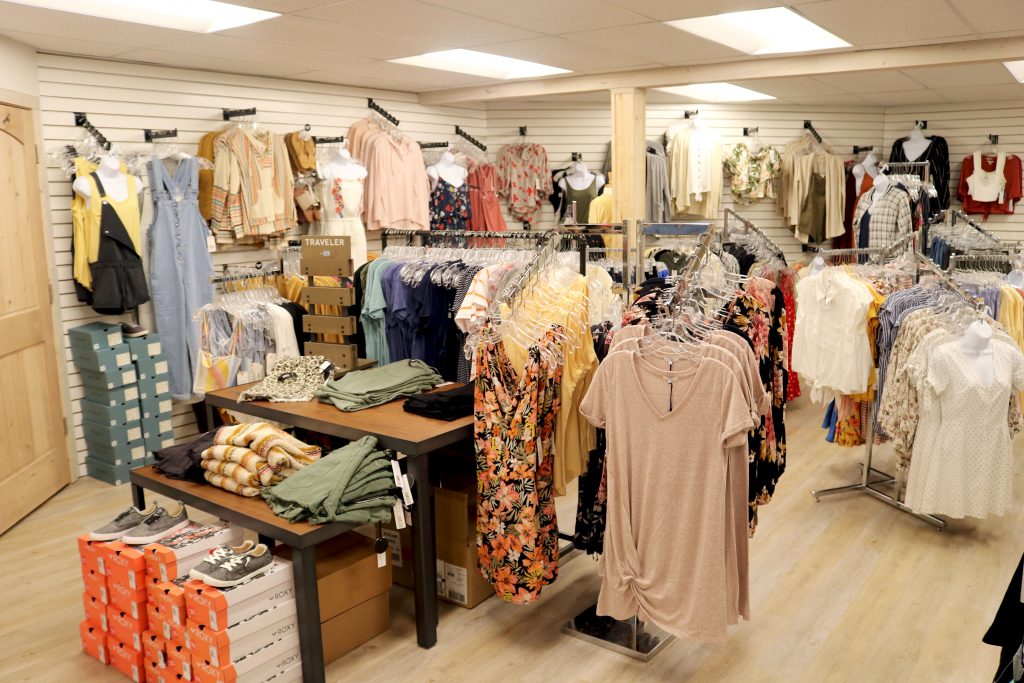 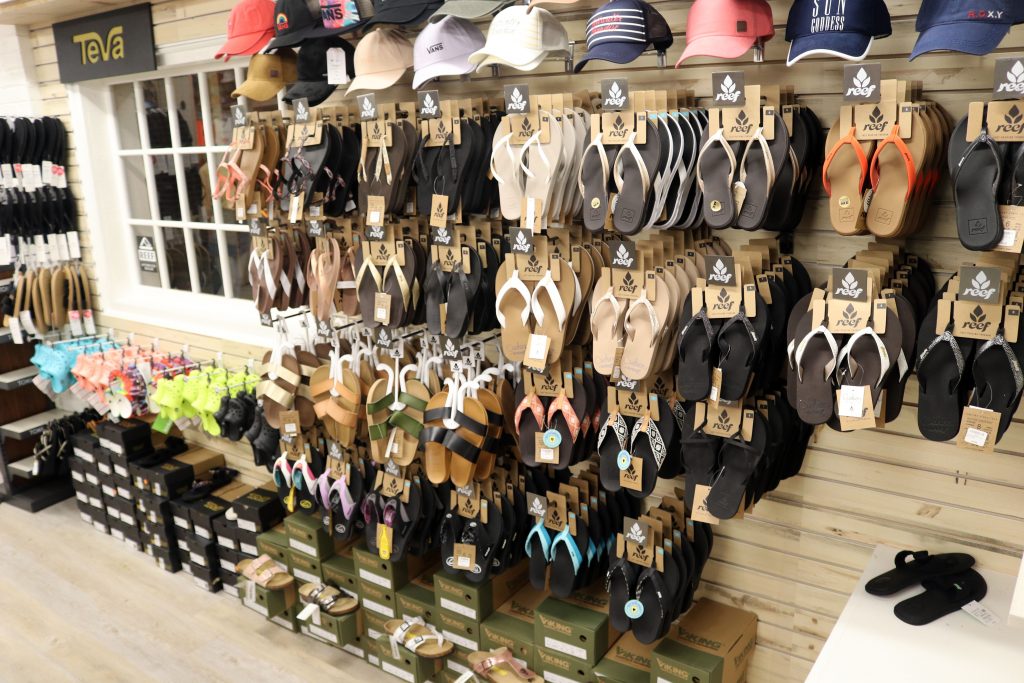 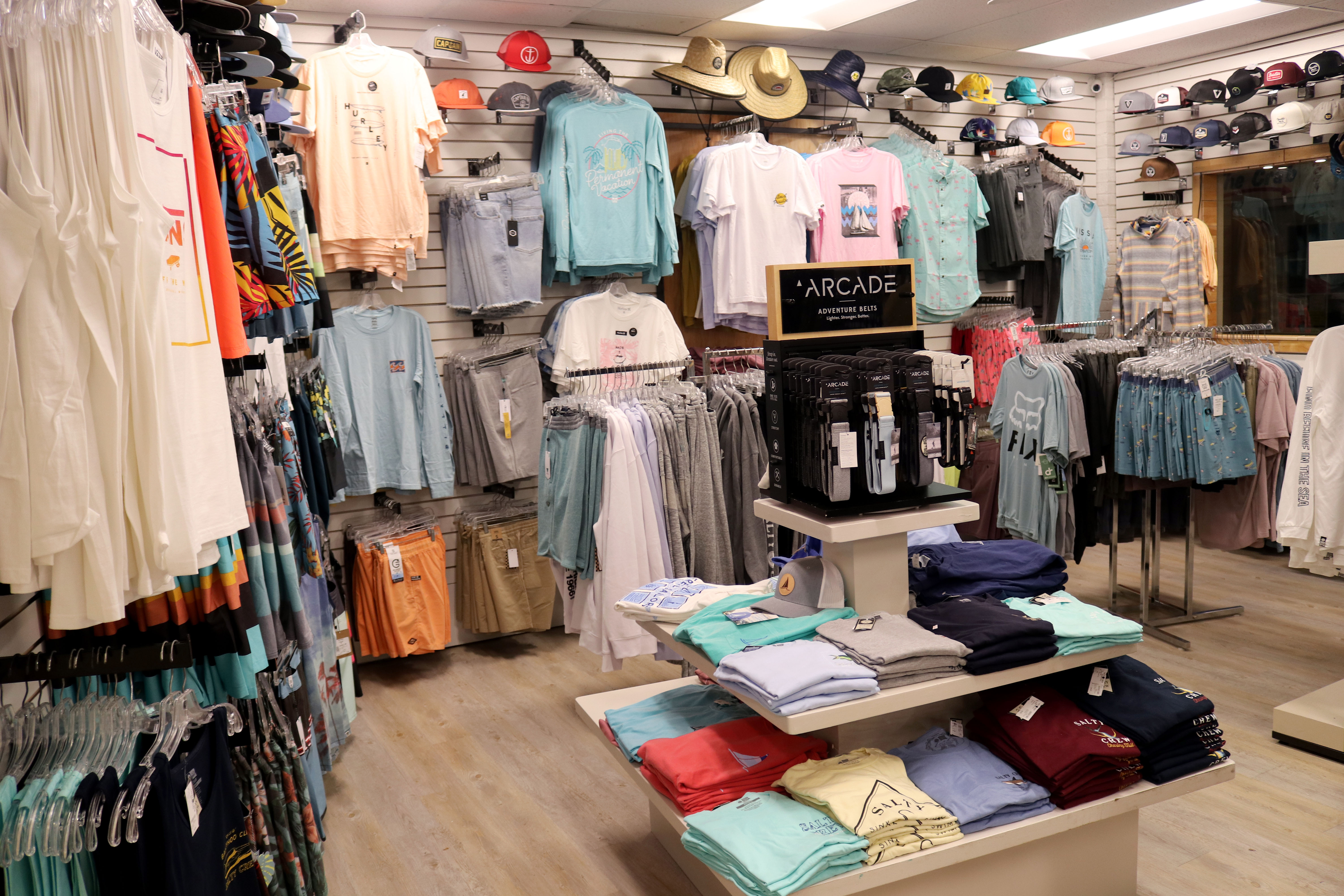 Reason for the Rebranding

Steve’s dream was to create a better atmosphere and shopping experience for those who walked through the door, and in May 2018, the expanded Animal House opened its doors to its many customers.

“I loved the reactions of the customers and the smiles the expansion and remodel brought to faces,” Steve said. “Before the expansion there would be times when the store was so crowded that it would effect the shopping experience of customers, but now they enjoy being in the store longer and interacting with our staff.”

Steve is thankful the process wasn’t rushed, since he had dreams of expansion since 2010.

“To see where it was and where it is now, it is amazing! I don’t know how we survived before,” he said.

In 2019, the Animal House is commemorating its 30th anniversary with a rebranding, as it celebrates being the original surf shop of the Iowa Great Lakes. The store hasn’t shifted far from this original theme and continues to offer brands and trendy styles developed in California and brought to the shores of West Lake Okoboji.

One reason why Steve has rebranded the Animal House was to move away from the movie image and make it more relevant to Okoboji and Iowa Great Lakes region.

“I wanted to create a logo that represented a West Coast concept surf shop in Iowa," Steve said. “A huge thank you to Brock Bringle for taking my idea and developing a logo that goes above and beyond what I had even envisioned. He created something new, fresh and fun that represents the store’s image.”

Other upcoming changes for the Animal House are the creation of an online presence, which will be at www.animalhouseokoboji.com. Steve has plans to develop the Animal House product online and other brands the store carries. Steve is also partnering with local businesses like Boji Surf Co and SBOJI to sell their product at the store. Steve is excited to showcase the collection of the Animal House Brand on the SBOJI sunglasses.

Through time, the store has created a Midwest coastal experience for its customers, situated along the blue waters of West Lake Okoboji. Steve has embraced God’s calling for him and carrying on the family business.

“My dad recently told me, ‘It’s amazing how God has worked in my life and family’s life that now my oldest son can be a part of this tradition. I’m proud of this legacy in your life to have it continue on,’” Steve said. “Those words meant a lot.”

Come celebrate Animal House’s 30th Birthday all summer long! Their staff will be waiting for you on the lower level of the Central Emporium.

Cheers to 30 years of Animal House! 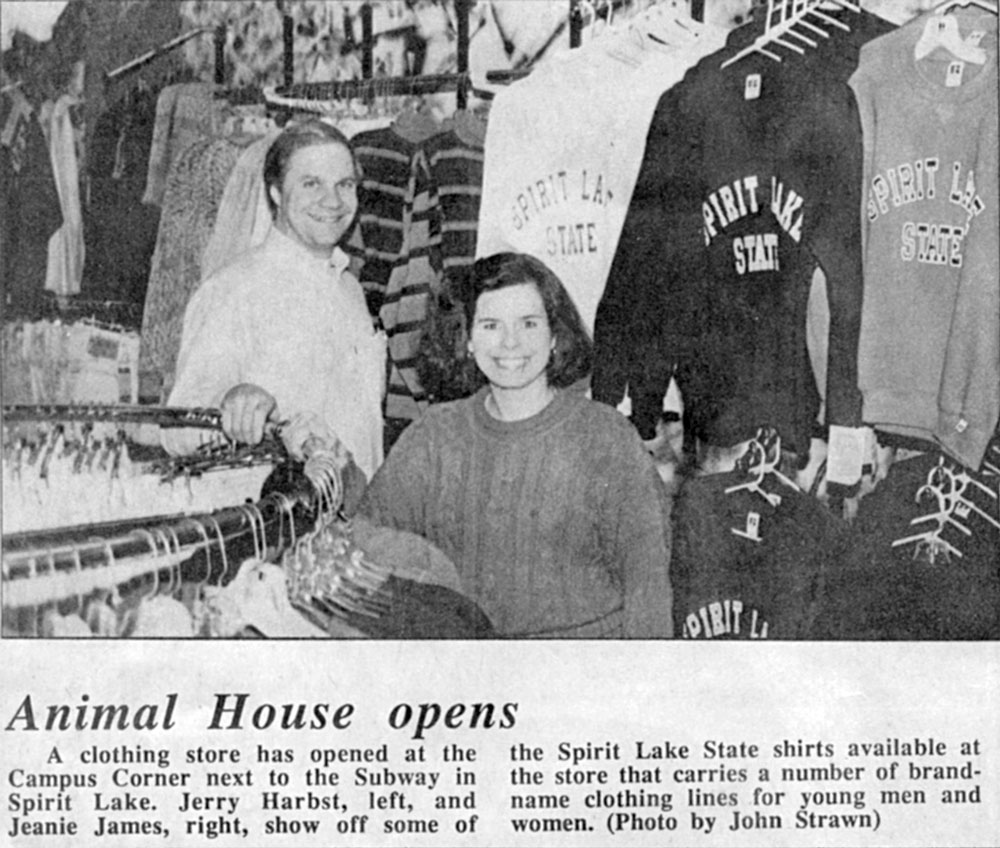 The 2019 season is an exciting time for the Animal House, as the store celebrates 30 years of being in business. It was started by Rod and Jeannie James and Jerry and Linda Harbst in 1989. The original location was next to Subway in Spirit Lake.

The store’s name was originally derived from the motion picture National Lampoon’s Animal House, released in 1978. The Spirit Lake showcased apparel and brand name clothing for young men and women, with some of the brands still carried to this day.

As the Animal House grew in popularity, the store was relocated to the Central Emporium where it became a necessary stopping place for an Iowa Great Lakes shopping experience.

The Strom family purchased the store in 2007 from the second owners, Pat and Marylea Olsen. 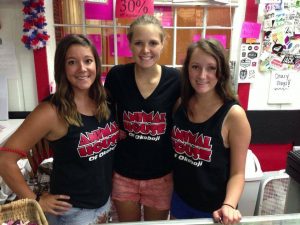 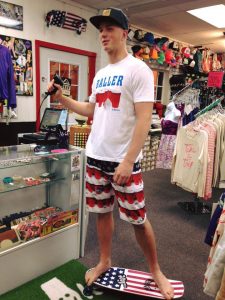 Join Animal House all summer long as they celebrate their 30th Anniversary in the Iowa Great Lakes area. They will be kicking off summer on Memorial Day Weekend and will have drawings and raffles throughout the summer.

“We will be doing drawings and raffles,” Steve said, “Come visit us this summer and celebrate our 30th Anniversary. I look forward to seeing all our great customers!"

Special events in May and June: