Well-known for his medical expertise in Iowa, Dr. Ronald Kolegraff MD, FACS has a passion for helping people better their lives. Dr. Kolegraff and his staff at re*be® Skin and Vein Clinic enter each day providing professional certified medical care to every patient coming through the door.

“I love getting up each day and I’m excited about my job. I love the opportunity to meet people, build relationships and hear their stories.”

Dr. Kolegraff was born and raised in San Jose, California, graduating from high school as his class’s valedictorian. He attended the United States Air Force Academy and graduated from the University of California, Santa Barbara with a BA degree in Zoology and a BS degree in Chemistry.

He went on to attend medical school at the University of California at Irvine and was a member of Alpha Omega Alpha. From here, he received the Dean’s award internship and residency in general surgery at the University of Iowa, taking him on a lifelong career path that uprooted him from CA and into IA.

For over 37 years, Dr. Kolegraff has been building relationships and learning family trees in the Iowa Great Lakes area and surrounding communities. He devoted his first 20 years to general surgery and has now spent the past
13 years dedicated to addressing the health and cosmetic concerns of
men and women. He is licensed to practice in Iowa, Minnesota, South Dakota, and North Dakota.

“I love seeing the smile on a patient’s face after you’ve been able to
help them,” he said. “In general surgery, a patient needs care
because they’re sick. In cosmetic surgery, the patient chooses to
come to re*be® for an improvement. I’m excited for how each day
someone’s life can be improved.”

In 2006, re*be® Skin and Vein Clinic was opened under the direction of
Dr. Kolegraff, who is double boarded in surgery and phlebology (varicose veins) and has a special interest in cosmetic procedures. His staff of twelve have also received specialized training and is certified in vein diagnosis and treatment. They also have completed CoolSculpt University with one that is a Master in CoolSculpting.

Since the clinic’s opening, re*be®’s certified vascular testing center has been one of the busiest vein practices in the state of Iowa.

“We focus on a stable set of services that are tried and true and done under local anesthesia,” Dr. Kolegraff said. “We want to offer procedures that work. While I’m in-tuned to what’s happening in the industry, I’m not going to add something that doesn’t work.”

Dr. Kolegraff also spends considerable time studying and understanding a procedure before adding it to his practice. For instance, in preparation, he spent over four years learning and studying about liposuction and breast implants under local anesthesia, which are now big parts of re*be®’s practice.

“It’s effective and safer this way,” he said. “None of them are new procedures in the country but we’re glad we could bring them to this area.”

One of the newer procedures at re*be® is eyelid lifts or office face lifts. A successful surgery can have tremendous impact on a person’s face, improving vision or the overall appearance of the face.

re*be® has a variety of cosmetic lasers and advanced treatment rooms. The staff has had considerable training and extensive experience with using local anesthesia, creating the ability to complete these procedures in the office while the person’s awake. With most of the cosmetic procedures, the patient is able to go home the same day.

“Being able to use local anesthesia is so much safer and a person feels much more comfortable,” Dr. Kolegraff said. “When someone is under general anesthesia, there are eight types of drugs that can be used, and under local, three drugs are used and two are already a part of the body. This can eliminate possible side effects and I feel like the recovery is also faster.”

Local anesthesia also makes a patient much more comfortable during the procedure. Dr. Kolegraff has had patients texting friends during the surgery or even closely watching March Madness basketball games.

Vice Chairman of the Iowa Board of Medicine

Dr. Kolegraff is currently the Vice Chairman of the Iowa Board of Medicine, which is a nomination made by the Governor and approved by the Iowa Senate. When he first stepped on, the state wasn’t one of the top places new doctors pursued their profession.

“One of my goals on the committee was to improve Iowa’s stature,” Dr. Kolegraff said. “Whatever impact I had, we wanted to improve healthcare and create an environment where doctors want to practice in Iowa, as well as make the practice of medicine safer and more predictable.

During Dr. Kolegraff’s time, he has watched the state go from the bottom of the list to being #2 in the country. The #1 state is currently Minnesota.

“It has been a blessing to be on the board and be nominated as Vice Chairman,” he said. “If in a small way I can impact healthcare in Iowa, then I feel like I’ve contributed.”

Since opening re*be® in 2006, Dr. Kolegraff’s clinic has grown to offer over 200 clinically certified procedures. The clinic has twelve employees, including two RVTs, six RNs, and a certified medical assistant.

Dr. Kolegraff also has the assistance of Nicole Stall NP-C DCNP, a licensed dermatology nurse practitioner, who has over 10 years of experience and provides additional care with specific interests in skin cancer diagnosis and treatment, cosmetic procedures, as well as many other skin issues.

“Everyone around me is certified by the state and trained in their specific areas, as well as equipment certified,” Dr. Kolegraff said. “They are huge reasons why re*be® is successful.”

The Love of Community

One thing Dr. Kolegraff loves about this area is the feeling of community, whether it’s at work or when he’s out and about. He enjoys meeting new people and stays connected with families he’s known for years.

“I learn from every life I encounter,” he said. “Whether it’s a new story or new information, I learn something. I get the biggest kick out of getting to know a family and then later see how the family tree is growing.”

This is very different from his brother’s experience in Santa Barbara, a city of over half-million people.

“He’s a surgeon out there and no one knows anyone,” Dr. Kolegraff said. “I much prefer where we live and getting to know people, their lives and being a part of a community that cares about each other.”

Dr. Kolegraff and his wife Jill have lived on an acreage near Milford for over 29 years, where the couple raised their seven children. Jill is a registered nurse and graduated from the San Diego State in CA with a BSN. She has played a large role in the development of the re*be® Skin and Vein Clinic.

Their seven children have all moved throughout the country but Dr. Kolegraff has hopes of his oldest daughter Kelly joining him at re*be®, as she’s in her final year at John Hopkin’s in Baltimore, studying plastic surgery.

“I’d love to have her join me as a partner and it would be awesome to bring someone of her caliber to the area,” he said.

While Dr. Kolegraff has hopes of Kelly joining him, he also has no plans of retiring.

“I plan on being here for a long time, as long as I can,” he said. “I love being a part of this community and enjoy helping people.”

This passion for helping people and using his skills to better lives was recognized this year when Dr. Kolegraff was named a 2019 University of Okoboji Winter Games Cheerleader — a well-deserved honor! 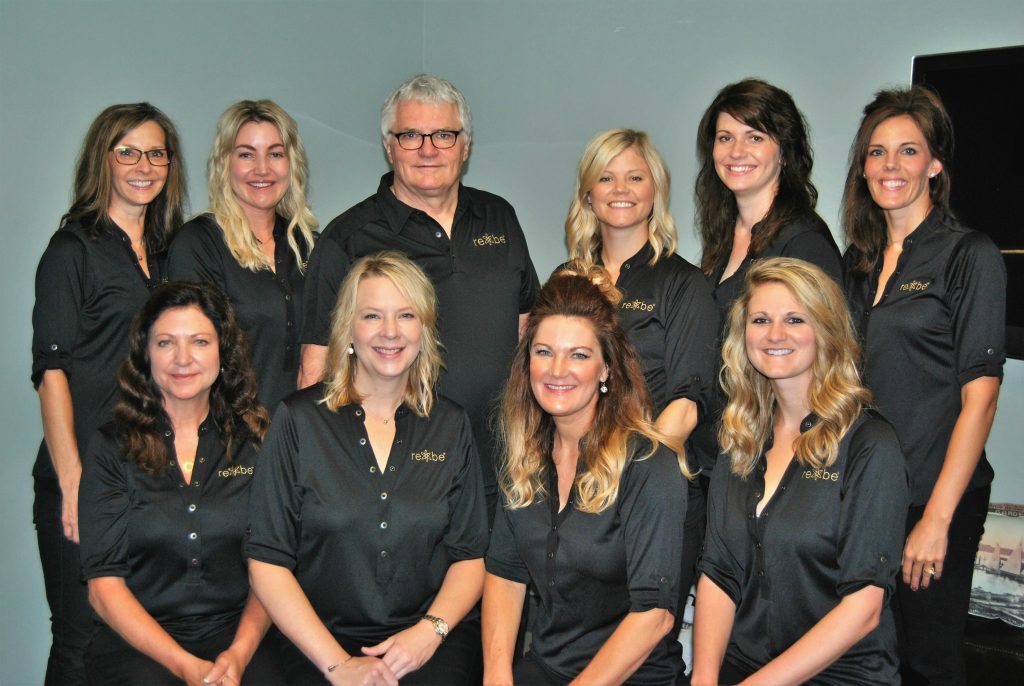