There’s no sound but the hum of the wind and the crash of the water against the boat. The beautiful white sails are full out. With a personality all of its own, the boat speeds up. The constant abundance of information and myriad of variables barrage the sailors, always wondering when the lake will switch on a whim.

For the Rierson family, sailing is addicting. 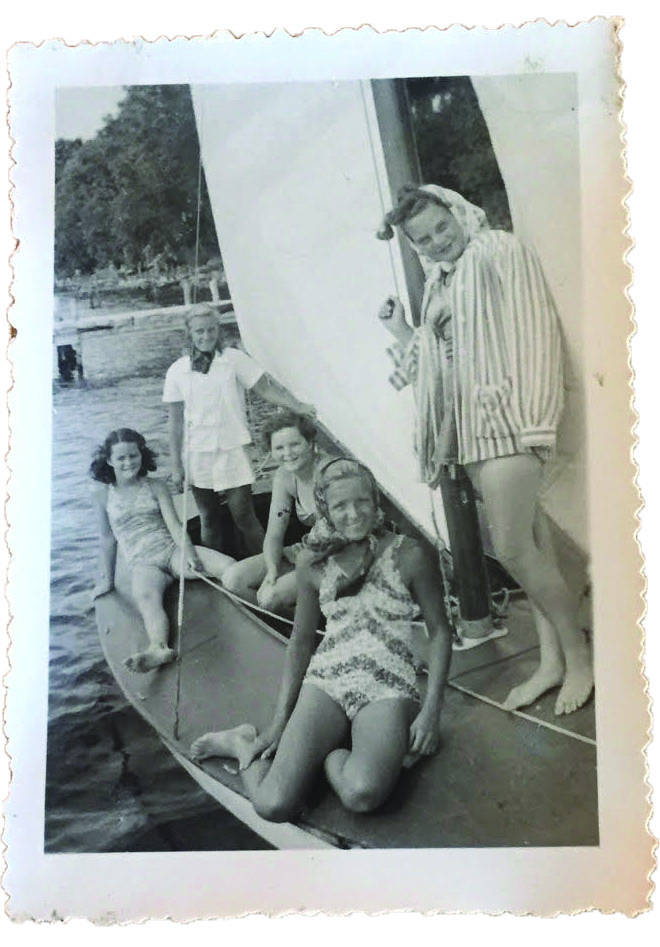 The Rierson's grandmother Patty, was an active sailor and while her husband was in WWII, her friend Liz Sandhal and her sailed the sea boat.

For generations, this family has grown up sailing West Lake Okoboji. They know all of the bays, the points and the way the wind moves around them. As young children, they learn to sail and race at the Okoboji Sailing Center. They watch their family members enjoy the thrill of a race and look forward to their own turn sailing for the Okoboji Yacht Club.

“I absolutely love how sailing is truly a lifetime sport.  You can pretty much get on any type of boat anywhere in the world and be able to enjoy the wind and the waves,” Dr. Chris Rierson said.

Chris and his siblings Jeremy and Stacie gained a love of sailing from their family. Their grandmother Patricia, her brother Jim and sister Doris grew up sailing West Lake Okoboji in the 1930s, first starting with an X-boat and later moved onto a P 4 "Padorjim." The siblings started sailing on Dixon Beach with sailors Jerry Huse and Boober Schneider, while also attending sailing school and racing on the weekends.

“I was lucky enough to grow up watching those two sail (Jerry and Boober) and even was third crew for both of them on their C-scows,” Stacie said. “They were incredible sailors and I feel proud to know them.”

Jeremy, Chris, and Stacie’s father Tom Rierson also gained a passion for sailing from his mother and has passed on the tradition to his family. Tom is the current Sailing School Chairman and has been a past Commodore of the Okoboji Yacht Club.

“We get to carry on the tradition in our C-scow, P 4 'Njorth,'” Chris said. “My wife, Abby, who had never stepped foot on a sailboat before we started dating is now an amazing crew!  And now our kids are starting to learn and race at the Okoboji Sailing Center.  Sailing was and always will be a family affair for the Riersons.”

Sailing At a Young Age

The first boat Stacie sailed was a Laser, which is a single person boat with one sail. Chris started sailing at age seven at the Okoboji Yacht Club on an Opti and a Laser. Both attribute their brother Jeremy as one of their main instructors and sailing role models growing up, as well as instructors like Jane and Ann Hopkins, Lance Avery, Steve and Mike Everist, Steve Kelly, Mark and Molli Zito, and Amy Montgomery.

“I taught the younger children and beginning sailors,” Stacie said. “We mostly used Optis to teach at the time, and I loved watching children feel their boat move for the first time on only wind power. The Sailing Center is a special place where a love for sailing begins, new friendships grow and lots of fun happens on the water!”

Growing up, the family was at the Okoboji Yacht Club almost every day during the summer. At age 11, Chris began crewing with Jeremy on the X-boat. The siblings would sail in the club races every weekend and race in several regattas around the Midwest. When Jeremy graduated out of the X-boat at age 16, Chris and Stacie took over the X-boat, with Chris skippering and Stacie crewing.

As they grew older, the Rierson kids moved onto scow sailing, M-16, MC, C boats on weekends during the summer months.

The siblings have countless sailing stories and experienced success throughout the years. They’ve also been a part of life-threatening circumstances out on the water.

More recently, one of Chris’ favorite times was when they won their first C-scow National Race on Lake Menona in Wisconsin. Jeremy and Chris started the race in a good position and sailed into the top five during the first half of the race.

“Then I can remember sailing downwind and we split from the rest of the group and I remember saying to my brother, ‘Don’t look now but we just sailed our way into first,’” Chris said. “We never looked back from there. Getting that first big win at Nationals in the 2016 competition was an awesome feeling.”

Completely different emotions took place for the Rierson brothers in 2017, when the boat High Priority 2 capsized during a 330-mile race from Chicago to Mackinac Island.

“It is an amazing race that usually takes two-three days to complete,” Chris said. “I had sailed the Mac race two others times and had finished it successfully the first year and then got knocked out of the race the second year by a severe storm.”

In 2017, a storm came up unexpectedly and created havoc with High Priority 2. The sudden high bursts of 85 mph winds and the high waves shredded their sails and within minutes caused the boat to capsize. All four sailors went under and those next minutes were filled with scary moments.

“Capsizing in the middle of the night on Lake Michigan has definitely been my most terrifying sailing experiences but thank the Lord that we all survived to tell the stories and get back out there and do it again,” Chris said.

With the help of flares and “May Days,” other boats took note of their location during the raging waters. Two hours later, the men were picked up by a Coast Guard cutter and taken to safety.

The Rierson siblings feel fortunate for the opportunities they’ve received to compete in Regattas all over the country. Chris feels that over the last several years, they have really found their groove and have found their success in a very tough and competitive fleet.

“The summer of 2017 was probably our best year so far, when we finished fifth in the C National Regatta and won two of the six races,” Chris said.

This was the same year Jeremy and Chris were invited to the Bluechip Regatta, where the top 25 sailors from the C-scow fleet compete. They had the opportunity to race on Lake Pistakee in Illinois.

“We were leading the entire regatta until the last race and ended up second in the event by just two points to a great sailor out of Wisconsin, Jim Gluek,” he said.

Stacie has also sailed in numerous ILYA championships on both a C-scow and an A-scow. She sailed at Nationals in both C and A-scows as well as sailing in the Interlake regatta many times.

As the fourth generation of Riersons begins picking up the sport, all of their parents continue to enjoy sailing. Stacie moved to Minnetonka, MN as an adult, sailing A-scows, as well as E and C-scows and J24s

“Now that I have two young children, sailing is more sporadic, but I will sometimes hop on the C-scow with Chris and Jeremy when we are down for a weekend or go out for fun with our older children,” she said. “My four-year-old is already interested in sailing and I can’t wait for her to learn!”

Stacie said some of her best friendships have developed from sailing, as she met her best friend at sailing school. When moving to Minnesota, she reached out to friends they had competed with on Minnetonka.

“My best friend became my maid of honor and one of the most important people in my life,” she said. “And our Minnesota friends helped me find a place to live when I moved to Minnetonka and our friendship picked right up. Learning to sail is a lifelong skill and the relationships formed last for a lifetime.”

The biggest part of sailing is being together as a family. Chris, Abby, and Stacie sailed together in the 2013 Okoboji Regatta and finished well. The time on the water draws them together in ways not often found in life.

“The time on the water together can be intense when you are competing (there is nowhere to go if you need to get away,) but there is also so many laughs and stories and it is just time together,” Stacie said.

As the Rierson’s can share, every time on the water provides them with a different sailing experience. There are countless technical aspects of the race that come into play and the water never acts the same way.

“This is what I love about competing because every race is completely different,” Chris said.

Obviously, West Lake Okoboji is their favorite place to sail, as they know the ins and outs of the lake. Sailing is the major way the Rierson’s enjoy the blue waters, and they prefer the early morning Saturday and Sunday mornings.

“My favorite time on the lake is the cool Saturday and Sunday mornings when the motor boat traffic is quiet and we just get to be on the water with just the power of the wind,” Chris said. “Just the sound, smell, and feeling that come with sailing on Okoboji is so special for me.”

At the same time, Chris said sailing doesn’t have to always be a competition. He enjoys the times when he goes out on a lake and just enjoys the water.

“I think being on the water is one of the most peaceful things you can do,” he said. “When you have the opportunity to be on a boat powered only by the wind, I think it enhances your sense of peace.”

The entire Rierson family appreciates the lake and is grateful for the opportunities they’ve had with the Okoboji Sailing Center and the Okoboji Yacht Club. Now, they are enjoying passing on the family tradition to their own children.

“The Okoboji Sailing Center has so many opportunities for everyone now that getting involved is easy.  You definitely don’t have to be from a ‘sailing family’ to have access to the lake and sailing,” Chris said. “Once you do get into it, have fun and stick with it. Sailing is a very humbling sport that can be frustrating at times, but if you keep at it, you may find yourself at that front of the fleet some day!”

Which, being at the front of the fleet is the Rierson family's goal at the 2019 Inter-Lake Regatta on West Lake Okoboji on Aug. 2-3 – another opportunity to sail competitively on their favorite lake.