Okoboji Dairy and Ice Cream Store are From Days Past

Life has changed dramatically over the past 100 years. The simple days of milk being hand delivered to your door in glass bottles or 5¢ ice cream cones from Smith’s Okoboji Dairy are from days past. It was a time filled with long hours and hard work, as the Depression impacted each and every person.

“The Depression was hard and you had to work hard to survive,” Peggy Jones said, a young girl during the 1930s. “But it was also a much simpler time and you were very close to your family. This strong family bond has continued throughout the years.”

In the spring of 1935, her parents Byron and Stella Smith established Smith’s Okoboji Dairy, up on the hill where The Inn once had its driving range. This barn provided milk for families throughout Okoboji and Arnold’s Park.

“My dad would go around and collect milk from the farmers in the area. He would come back and pasteurize the milk, bottle it and then hand deliver it around the Lakes,” Peggy said. “While he was collecting milk, in the early years, my mom would help with the dairy work.”

A year later, the couple purchased a home for their family on Des Moines Beach and converted the horse barn on the property into a larger dairy, having outgrown the previous location. In 1936, milk was selling for 6¢ a quart.

At this time, Peggy was two-years-old, and her brother Pierre had just been born. Her mother Stella opened up the Okoboji Ice Cream Store located just north of the bridge on Highway 71. It was across the road from the Okoboji Store and a popular stopping point for many in the area. For the next 18 years, the store was open from Mother’s Day to Labor Day and gained statewide recognition for its superb homemade cones and malts.

Peggy's father Byron made the ice cream mix for his wife Stella, and she created each homemade ice cream flavor specially, with licorice being an all-time favorite. She would buy flavoring like maple nut from a supplier or fresh fruit from across the street at the Okoboji Store.

“It would often be fruit that wasn’t spoiled yet but couldn’t sell anymore,” Peggy said. “The fruit flavored ice cream was so good, especially cherry nut and strawberry.”

The ice cream mixture would go into a big mixer, and once Stella had created the perfect flavor and consistency, it would run out into the quarts, pints, and cans. They would be taken and frozen. Ice cream would be hand dipped out of the cans, and people would often buy them by the quart.

In 1951, Des Moines Register’s favorite columnist Harlan Miller wrote in the statewide paper, “Maybe it isn’t earth-shaking, but across from the post office at Okoboji the ice cream emporium now sells licorice flavor ice cream cones, 1 dip for 5 cents or 2 dips for 10 cents. They’re a purplish color and probably the ace delicacy of the 1951 season. Or you can get one dipper of licorice and one of coconut, and I’ll bet Belgium’s King Baudoin wouldn’t mind sneaking one of those on his throne.”

He went to point out that ice cream from the Okoboji Ice Cream Store was a must-stop for families and individuals throughout the summer months.

In 1940, Okoboji Dairy purchased the Milford Dairy from Emery Bach, and in 1945, they acquired the Quality Creamery in Spirit Lake. Peggy's father Byron consolidated all of the dairy operations into the Quality Creamery Facility in Spirit Lake, and milk service was expanded to Spirit Lake, Okoboji, Arnolds Park, Milford, Terril, Lake Park, and other neighboring communities. Byron’s brother Byrnard and his wife Dorothy joined the dairy operation, after Byrnard returned home from military service.

Peggy remembers being around 10 when she started helping at the dairy. She and her brother Pierre would wash the glass bottles with a spinner brush and purified water or help with the machine that poured the milk into the bottles. They would then cap each bottle separately.

As Peggy grew older, she began helping hand deliver the milk to the homes. People would sign up for milk delivery during the week, and Okoboji Dairy would deliver on the appropriate day. If more milk was needed, they would let the Smith family know ahead of time.

The trucks would take bottled milk out for delivery and returned throughout the day for more in order to keep the milk cold and fresh. 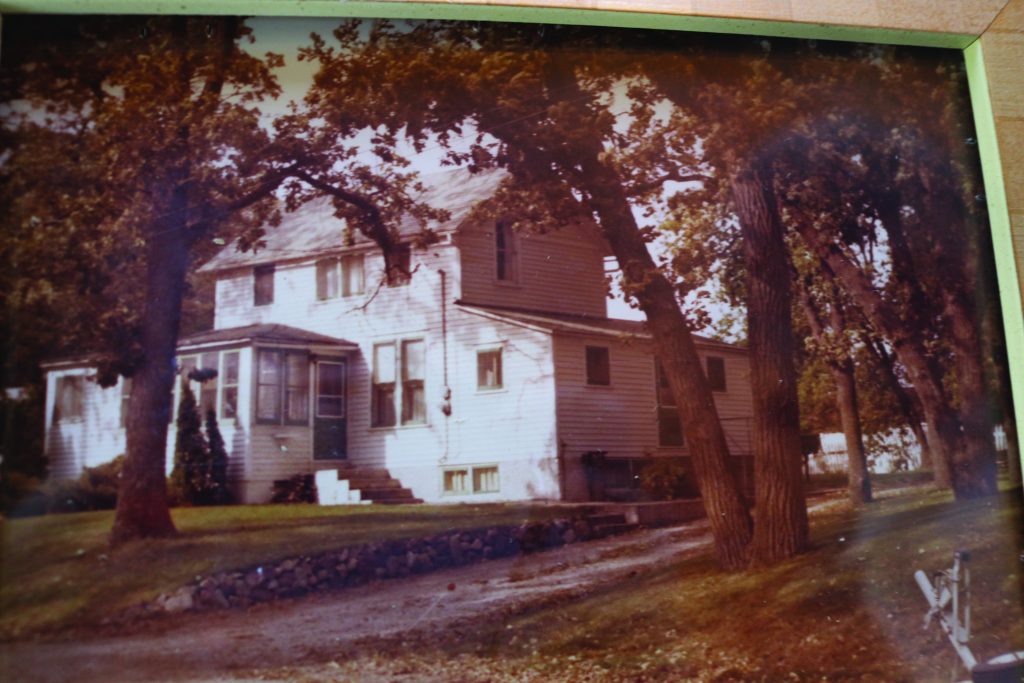 Today, the Smith family farmhouse and its property on Lakeshore Drive along Des Moines Beach is still loved on and lived in during the summer months. While the initial farmhouse has been sold to family friends, Peggy and her husband Roger live next door, in a house they built in 1976.

“I’ve lived on this property since I was two-years-old!” Peggy exclaimed. “Now, I live in my dream home next to where I grew up!”

In 1935, the farmhouse initially only had two bedrooms. The front portion was a screened porch, and in the summer months, Byron and Stella would sleep out there. In later years, this space was enclosed and became another room inside the home.

When Peggy was young, they used a hand pump in the kitchen where cistern water was pumped into the sink for use.

Peggy said her mother was quite the carpenter and was always finding ways to improve the 2-bedroom home, as well as make the space work for their growing family. At one point, there were two sets of bunk beds in a bedroom, with a separation wall in-between for the four kids. Stella also built a crib in their room in the closet for the baby, and as the children got older, Stella converted the basement into a bedroom for the boys, Pierre and Perry.

Byron and Stella also built a regulation-sized concrete basketball court in the backyard for their children and friends, creating a safe place for kids to gather. Midnight basketball games were the most popular and kids came from Milford and Spirit Lake to play.

The basketball court is still in Roger and Peggy’s backyard, along with the original hoops. Even today, it isn’t uncommon for a family member or neighbor to grab a ball and spend some time shooting hoops.

Changes Ahead for the Smith Family

The above is precious memories to Peggy and her family. In 1951, her father Byron sold Okoboji Dairy to his brother Byrnard Smith, with Byron joining his father Roy and his brother Cameron in the farming operation throughout the area. Generations of previous Smith family members had purchased large portions of land around the Iowa Great Lakes area and the family homestead was where Speier Park is currently located.

“I know Great Grandfather Milton’s name is on a lot of old abstracts for the area,” Peggy said. “They farmed from Speier Park to McDonalds down to where Barefoot Bar is now. He owned from the highway up to Fort Dodge Point.”

She also said that farming was her father’s first love, and he took great joy in raising cattle and later hogs.

While Byron had previously served as Okoboji Mayor for several years, in 1954, he was elected to the office of Dickinson County auditor and began a twenty year political career. The family moved to the farm north of Spirit Lake in 1957, with Peggy's younger siblings Pamela and Preston graduating from Spirit Lake High School.

Peggy went to college in Omaha in 1952 and married her husband Roger Jones in April 1955. They moved to Washington while he was in the service and returned to Okoboji in 1957. When her parents moved to the farm, they first rented the Okoboji house and initially bought the home from her parents.

One of the Okoboji Dairy barns that provided for the family so long ago remains on the property to this day.

“The roots of our family go way down in this area and such a blessing to all of us,” Peggy said. “For many years, our girls thought everyone’s last name was Smith or Jones because of all their nearby family. Our neighbors are family. We are a very close family, even as it has grown.” 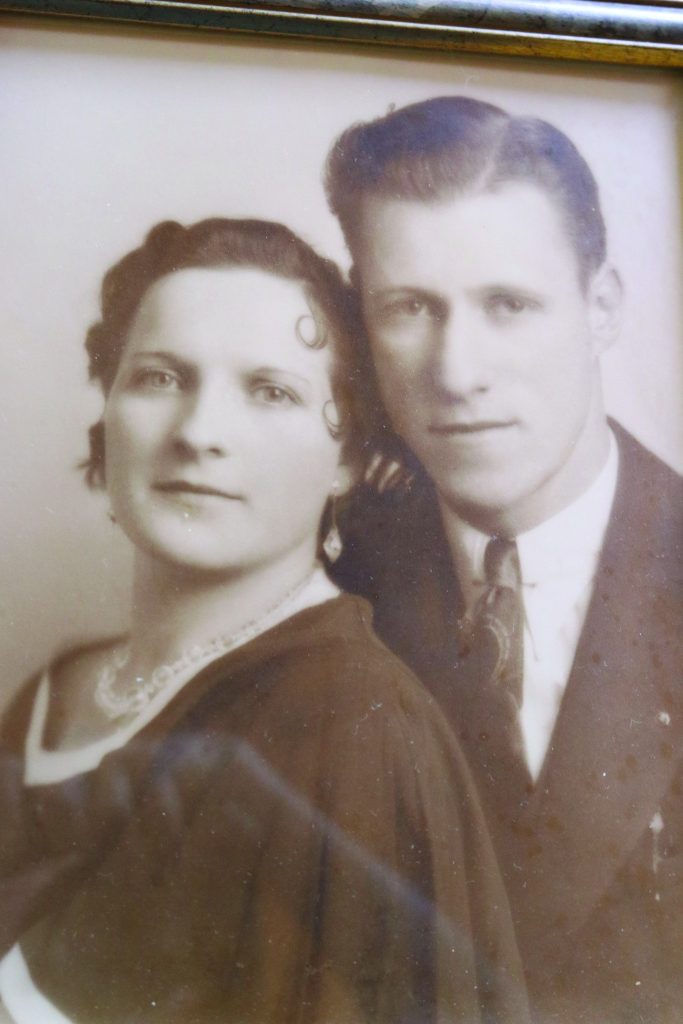 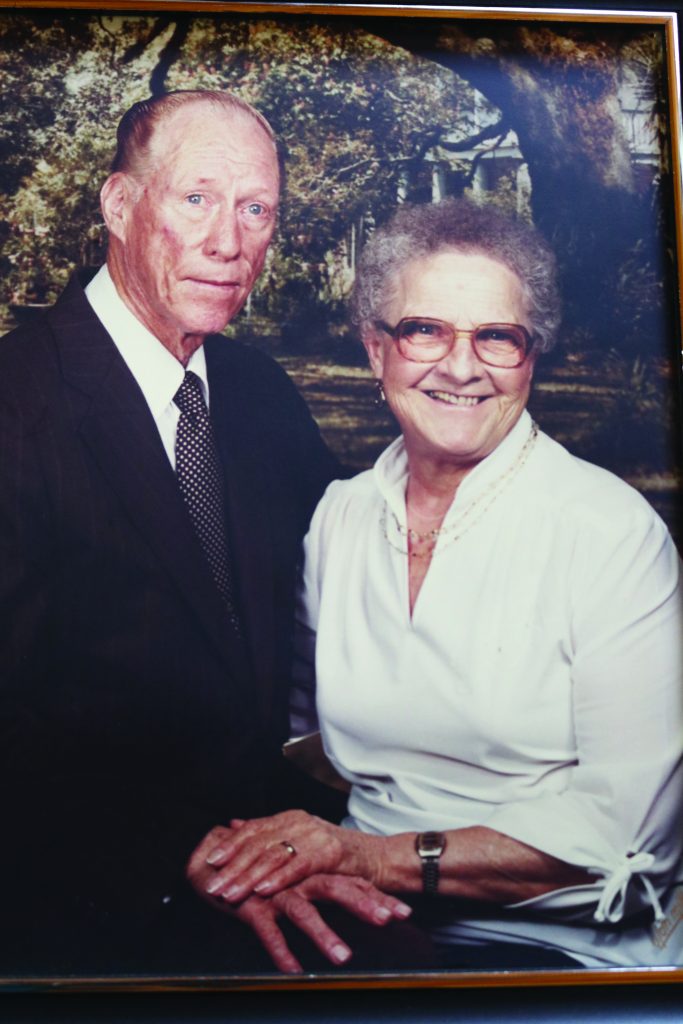 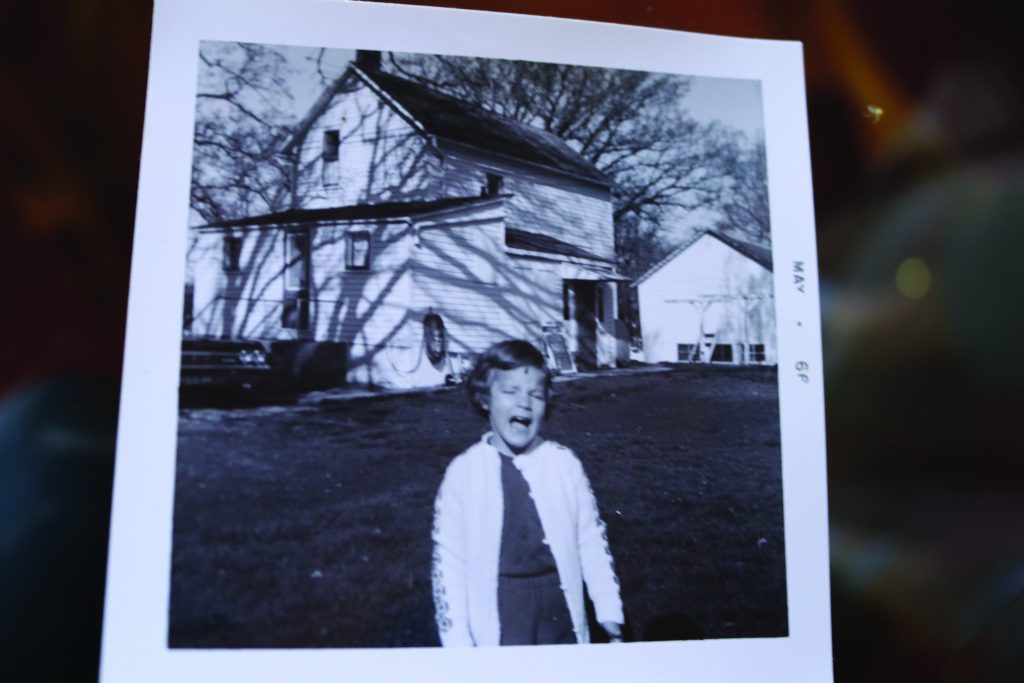 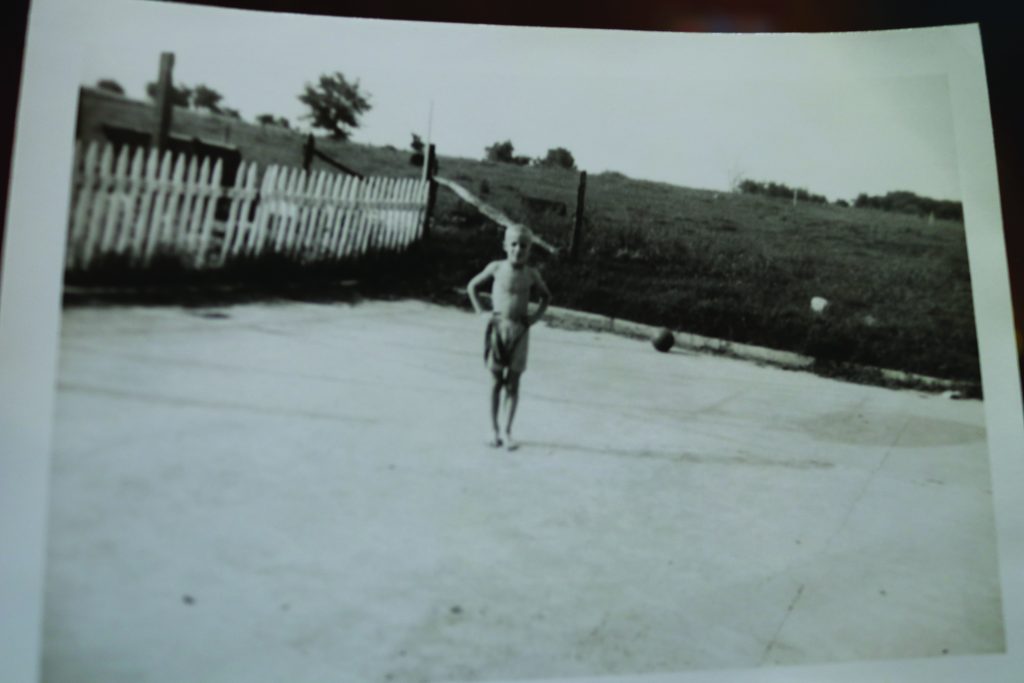 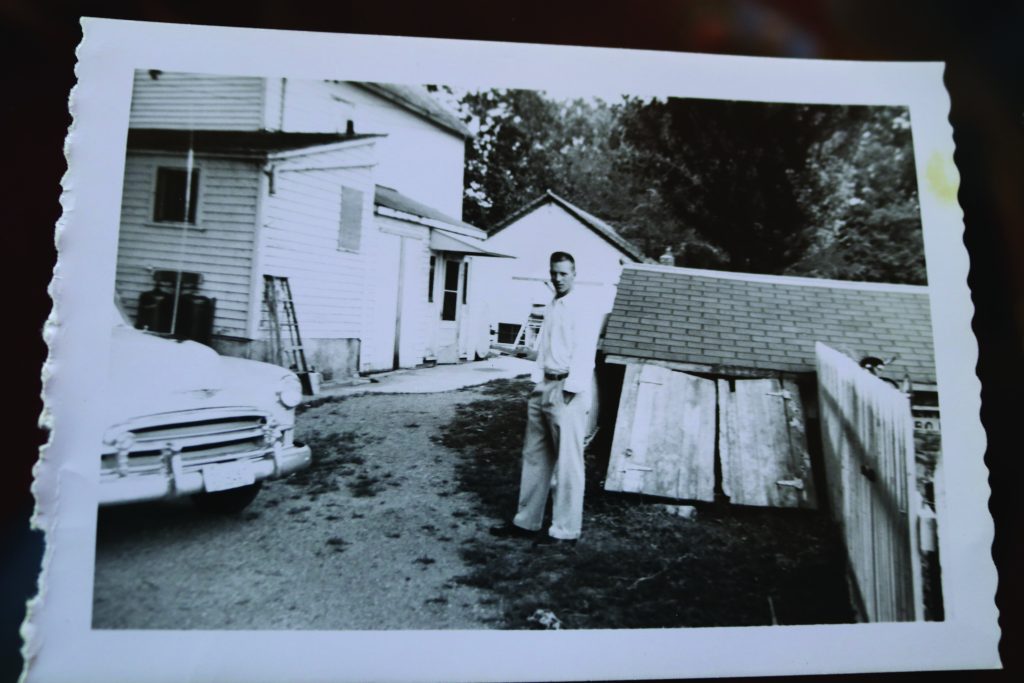 The Smith name is well-known throughout the region, with even a portion of West Lake Okoboji named after the family – Smith’s Bay.

Roots reach down deep for the family, with the first tendril gaining roots in 1857, when R.A. Smith visited the region as a member of the relief expedition directly following the Spirit Lake Massacre. Despite the unfortunate circumstances, R.A. Smith was so impressed with the beauty of the Lakes Area that he convinced his brother Milton to leave Fort Dodge and create roots in Dickinson County.

R.A. Smith is Peggy’s great uncle, while Milton is her great grandfather. They both established a home for their families and began the Smith Family Tree in the Iowa Great Lakes area.

One of those branches produced Roy Smith, son of Milton, who later married Beth Allen. This couple had five children, including Byron, Maynard, Marvelyn, Byrnard and Cameron, whose families had 17 children. These cousins are all still living and their families have over 97 members.

At Speier Park, there are two trees planted on land once owned by the Smith family in honor of Roy and Beth and other Smith family members.

Peggy’s brother Pierre Smith said at a tree planting ceremony in 1990, “It is particularly appropriate that this site be selected for this memorial. The ground on which we stand is part of the original Smith family homestead. Grandfather Smith tilled this ground for his entire farming life. As in the past, this ground will provide nourishment for the Smith family tree for generations to come. At the same time, it will provide recreation and enjoyment to visitors of the Lakes Area, an area that has been so generous to all of us and that Grandma and Grandpa loved so much.”

The trees are one of many symbols of the Smith Family legacy in the Iowa Great Lakes.