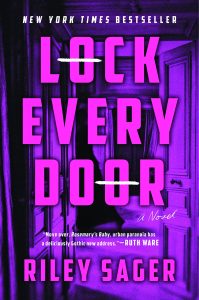 Lock Every Door by Riley Sager

I've decided that Sager's books should come with a printed warning: Enjoy with a friend or loved one, DO NOT consume alone, whatever you do.

By now most of you know thrillers are everything to me. I want to write suspense, so I spend most of my time reading it. I love creepy atmosphere creation. I love the weaving in of the subtle clues. I love nothing more than trapping a group of characters or a protagonist, and seeing what happens. Plus, I love personification of a space to the point it feels like a living, breathing entity. Riley Sager has swooped in and managed to master everything I look for in a thriller twice in a row! I'm so impressed and eager to read the only other book of his that I have left on my shelf.

Lock Every Door begins with our protagonist, Jules, who lost her job and her boyfriend simultaneously, and just came upon the most brilliant position one can imagine. She has been offered a position as an apartment sitter in one of the most prestigious buildings in Manhattan, The Bartholomew. This is a building that keeps to itself because of the famous residents, and history, which means Jules is required to keep to herself. She isn't allowed to have visitors or spend nights away from the apartment, or even speak to the other residents without being spoken to. Her reward is a handsome weekly salary, enough to set her up and get her life back on track. However, if it seems too good to be true, of course it is...Jules quickly figures this out as she befriends her neighbor Ingrid, and then she disappears. Something truly messed up is happening and The Bartholomew is most certainly not what it appears.

What follows is a chilling tale that will literally keep you up at night desperate to find out what happens, while also putting down the book to double check that the door is locked. If you love that creepy, building dread and a mystery you can try to piece together with the protagonist, you will love this book. Sager is a master of creating a cast of characters that will have you suspecting everyone and everything, yet I almost guarantee you won't be able to guess this ending! 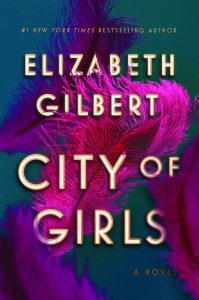 City of Girls by Elizabeth Gilbert

Gilbert achieved notable success with her novel Eat, Pray, Love which is a widely adored, personal story. City of Girls is something totally new, and became my favorite thing I have ever read from Gilbert, what a story!

The entire thing is told from the protagonist, Vivian’s POV. She’s telling the story, and it’s such a unique feature of the novel. I’m not sure I’ve read anything like it before. We begin in 1940s New York City. Our Vivian just moved to the city to live with her Aunt Peg who owns an old school theater company at a place called The Lily Playhouse. This quickly becomes home as Vivian is introduced to a wild cast of characters ranging from showgirls to composers to writers to dancers. She finds her place as the company seamstress and is promptly swallowed up by NYC in all of its glamour and grit.

The story weaves through Vivian’s early adventures as a newbie to the city to the war-time descending and then to her later life. She finds love and loses it. She creates friendships and learns about the world and herself while making a lot of mistakes along the way. The best way to describe this story is highly entertaining and this is one feminist character that will continuously surprise you. Gilbert knows how to sweep a reader into another time and fill every little bit of the page with details from the era. She doesn’t miss a sight, scent or sound and it creates a magical portal to the 1940s and 50s. I loved this one so much, such an experience. 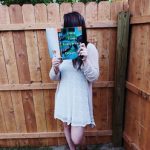