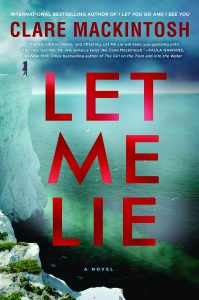 Let Me Lie by Clare Mackintosh

This was my first book from Clare Mackintosh and had I known she was a former police officer, I definitely would have picked her work up sooner! Let Me Lie is both a psychological thriller and a character-driven, beautiful narrative. If you decide to read this, be prepared for crazy twists and turns until the very end,  and the emotion of some really heavy material.

Our protagonist, Anna, is a new mother struggling with the deaths of both her parents, Tom and Caroline Johnson. As the story begins, we learn that both of them committed suicide two years ago, within months of each other from the cliffs at Beachy Head. Anna is still grief-stricken years later, and still can’t quite believe her parents would take their own lives.

Then on the anniversary of their deaths, she receives a note: Suicide? Think again.

This along with her gut feeling that won’t go away, are enough for her to take the note to the police. Cue my favorite character, Murray, a retired detective working at the desk when Anna comes in.

Though this book is a much slower burn than my typical thrillers, I highly recommend it. The writing is fantastic, and Mackintosh’s ability to get into a character’s psyche through grief is powerful. There is a lot of character building and backstory, but it is well-done. You will become invested in these characters and totally captivated with this story, even before all of the jaw-dropping twists happen. I love when a thriller is more than just creepy, terrifying scenes, though those scenes are ample, as well! She delivers a thriller that is so realistic it feels like it could happen to anyone. Mackintosh has an excellent reputation and I’m excited to read more from her in the near future. 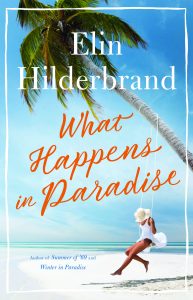 What Happens in Paradise by Elin Hilderbrand

This is the follow-up to Winter in Paradise and the second in a trilogy that will finish next October. If you haven’t read the first one, I highly recommend picking that one up first. It’s not surprising that I absolutely adored this book, as it’s hard for Elin to write something I don’t love! I have actually listened to both of them on audible and really enjoyed the narration.

We are whisked back to the island of St. John where Irene Steele’s husband was killed in a mysterious helicopter crash and she learned he was leading a double life, with an entire second family on the island. I honestly couldn’t remember all of the details from the first book before I started, but this fantastic cast of characters rushed back to me right when I started listening! Irene’s two sons, Baker and Cash, return to the island with her, not only to discover what truly happened with their dad but also as a fresh start. There also happens to be romance in the air for each of the Steele family members.

This book, as with all of Hilderbrand’s work, is totally enthralling. She captures Island life and paradise in a way no one else can. Every detail down to the food the characters eat and the cocktails they sip on is perfectly St. John. She spends time on the island each year and her passion for the place is evident even in her fiction. She also creates these characters that always feel like people you know. I can count on finding at least one of them reminiscent of someone in my life. Not to mention the romance and even a little mystery with a few intense scenes with the FBI. She’s a master. I don’t know how I will wait another whole year for the final book. Thankfully, I haven’t read her Winter Street Series yet, so I will be snuggling up with those four books next.