The other day, six of us ventured onto the "Riddle Me That" grounds to put our minds together and master the riddle of one of their rooms. Walking in we were greeted…by someone…I wasn’t aware of exactly who, because I was soaking up  all the puzzles, they are everywhere!

As our crew started to arrive, two ladies escorted us to a living room to await for our whole group to arrive. A giant puzzle sat on the coffee table where guests, through the months, have all worked on together. It was a goal for everyone (Or was that just my goal?) to fit a piece before we started our room. In the end, everyone was successful except for…that is right, yours truly! 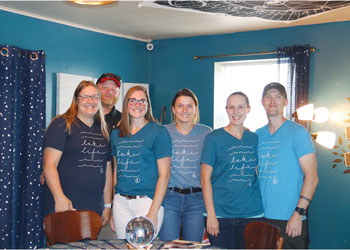 These two ladies, "Red" and "Blondie," are so passionate about these escape rooms, it oozes out of their pores. Just listening to them talk about them made me even more excited about what we were going to experience that day. Also, may I note the Riddle Me That rooms are not handed down from another escape room, they aren’t from books, and they have never been done before…ever. I say this in confidence because all of these escape rooms come from Red’s head. Kinda scary if you really think about it, don’t you think?

Red is the founder and owner of Riddle Me That. Her name on legal documents is Kara Packebush. But for all of the people that have tried her escape rooms, they know her as Red. Where does Blondie fit in? She is the right hand to Red, and to be honest, we never got her real name. Blondie naturally fit her, so we didn’t ask.

Blondie and Red are now ready to show us to our room. In our case, we entered the room of “The Unfortunate Fortune.”  Many of you might be familiar with the "Escape Room" concept. Some of Riddle Me That rooms are escape rooms. This means you have to solve a puzzle to get out of the room. (Note, you are never locked in, so no need to be nervous about that). Other rooms you have to solve a puzzle within the hour…or else. As explained on their website, the room we were entering shared how our favorite psychic Madam Zahara gave us some grim news. We learned there may be a way to actually reverse our unfortunate fortune, but we first had to discover the WHAT, WHERE, WHEN, & WHO to overturn the fate.

Tell me, why when entering a room that looks like the layer of a fortune teller, how you believe, even in the smallest part of your brain….way back in the back, that if you do not solve this within an hour, your life will be doomed! Seriously, close your eyes and picture yourself in a fortune teller’s living room. Then as you are stand there, you're told how your future is not very bright. Yep, that’s it. This is what it looks like here @ "Riddle Me That" and the goosebumps on your arms appear when you are told about your dim future.

Keep in mind, you have an hour to get out or solve the problem that has been laid before you. So, really think about this when selecting your friends to join you. One hour…trapped…enough said. Lucky for me my "Lake Life" team rocks and our #alongs didn’t get in our way….and were quite useful.

Blondie starts with us in the room and gives us the rundown of what is what. While in the room, you are video monitored. They also can hear you via the high-tech baby monitors installed in the room. Blondie goes through parts of the room where we do not need to look while searching for clues. As ridiculous as some of them sounded, she says "I am saying this because that means people have tried." She goes on to explain, "The air conditioner, we are using that just as an air conditioner today to keep you cool, please do not de-stuff my pillows, and don’t take anything off of the walls."

#along Brad, What happens when something comes off the wall? I wish Blondie had a camera to capture the faces of Brad and myself with our hands on the wall and looking back at the door after the boom of the fallen painting. Oops!

Blondie finishes her first visit with a bit of a story to start us off…we maybe should have paid more attention to what she said then we did. #along Brad was picking up stuff and already jumped right into digging for clues, while Blondie was telling her story. Tara whispers loudly, “What are you doing?” Let’s just say neither of them were helpful when trying to recall the story she told.

On top of the table in the center of the room, there was a crystal 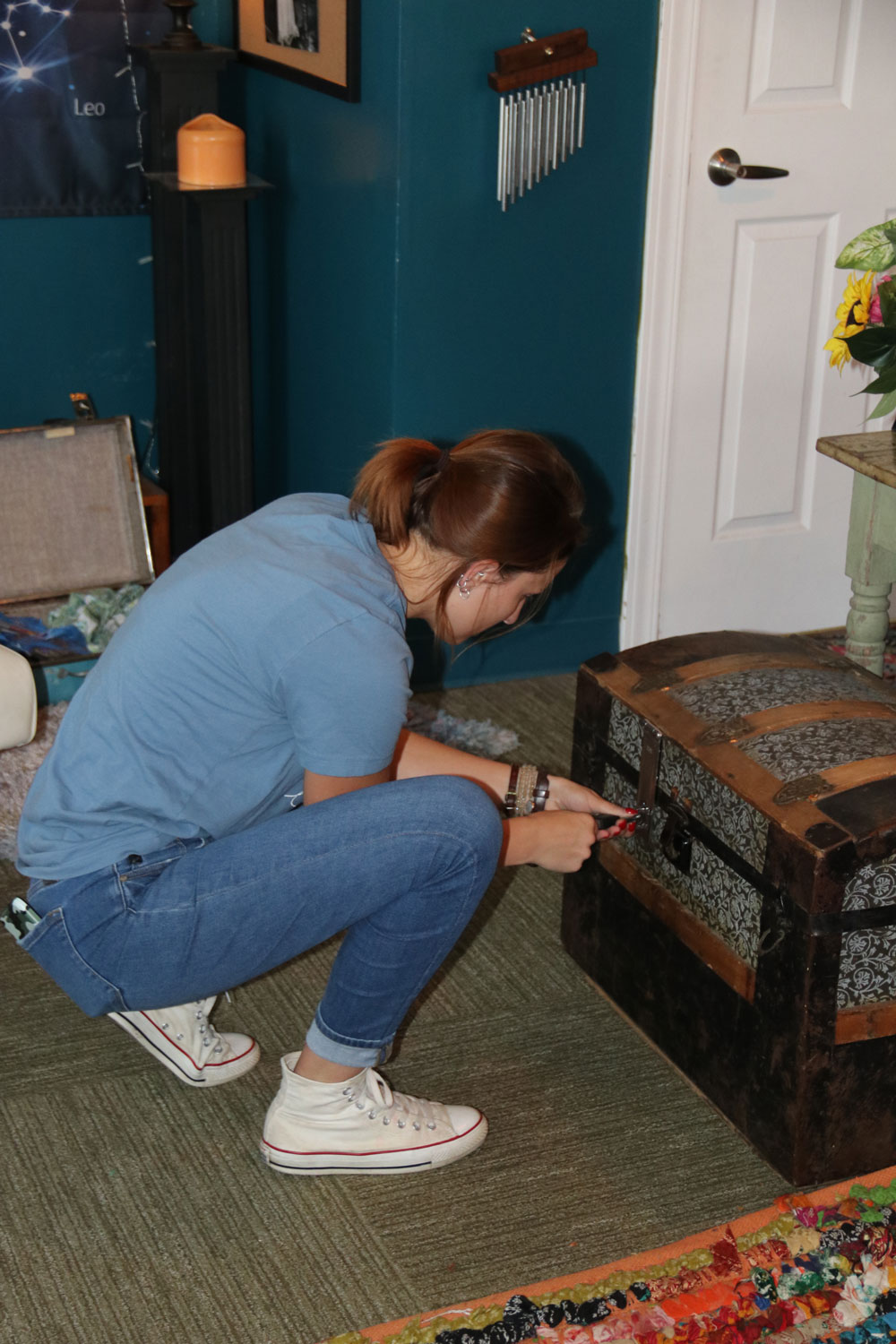 ball. As we were digging for clues to get started, I looked into the ball. I was excited to see something. I gathered others around me and said, “Guys, I don’t know how it is doing it…but I see something. Do you see that? It has writing…I can’t make it out. But it is over there.” #along Brad comes over…looks up…and then says, "Suz, does it look like the poster on the ceiling?" Hmm. Okay, everyone goes back to digging for clues elsewhere. BUT I did catch Brad holding up that same crystal ball and carrying it around the room. Holding it out in front of him and looking through it to see the room through the crystal ball. Let’s just say he didn’t find any clues that way either.

During our time spent in the room, it was amazing how each of us unconsciously took a lead in a different direction and ended up working on things separately. At times, I had no clue what others were working on. At one point, I looked over at #along Jeremy and he was dancing with an umbrella, and Jessie was curled up on the fainting couch with a book. Little did I know, they were both in the middle of solving the WHEN. And then looking over at Joy and Tara, they had so much stuff on the table. It looked to me like they were trying to organize chaos...unsuccessfully, I might add. But in reality, they were actually solving the WHO. 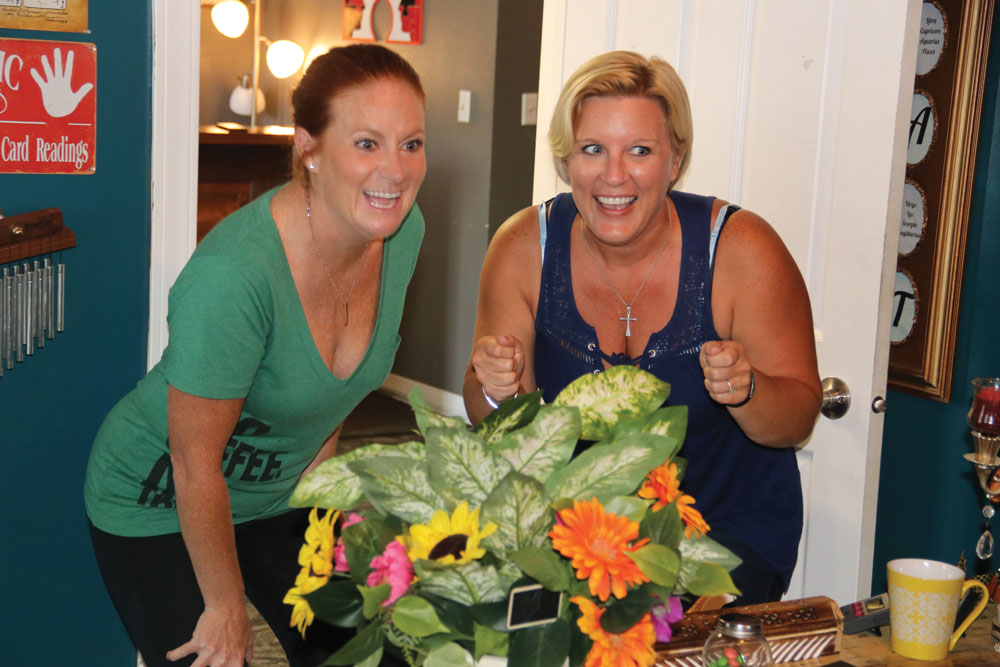 Now, skip ahead to six minutes left of our hour. I can’t go into much more detail of what happened during the 54 minutes prior, I don't want to ruin the fun for you!

We gave Jessie the cue to ring the chimes, and Red and Blondie nearly fell in the door. They knew we were close. We gave them our answers. When we told them the WHAT, Blondie’s shoulders shrunk. I thought NOOOO! That was the part I was working on with #along Brad. I felt awful that we screwed it up and everyone's fate was now doomed. Then they looked at each other and said "YES, you are right!" So minutes to spare and only a few helps from the outside, we solved it! And for those of you with the imagination a bit greater than others, like mine, are happy to note our fortune has been reversed, our future is bright again.

We all agree, people may think this is only for gamers

and geeks, but as we all walked out with smiles on our faces talking about each of the situations we were in, we now know it’s for everyone.

Riddle Me That changes out one of the two rooms every six months. What a perfect thing for those winter months, and then in the summer, when you are entertaining guests! I can't wait for the next one!