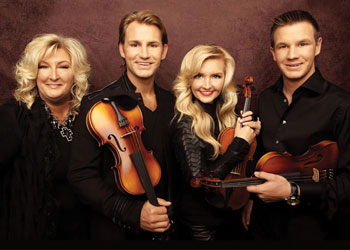 Some of the Brown family’s first musical recollections together are singing Christmas carols door-to-door in Le Mars. Shelly dressed up the three kids in Victorian costumes, top hats for the boys and full skirts for the girls.

While those costumes long ago became too small, The Brown Family continues to share their love for Christmas music and has become a national touring group.

The musical styling of Shelly, Michaela, Adam, and Andrew offer a life-changing experience and exudes excitement to audience of all ages. The Brown family has been touring across the United States since the group began its full-time musical ministry fifteen years ago; first at the local and state level before growing into a national touring group.

The Browns deliver a powerful gospel message through word and song, and one of the reasons for their prestigious honor of being named Top 10 Mixed Group of the Year for four years in a row.

“This honor is very rewarding coming from the fans and knowing that we’ve touched their hearts in some way.”  Shelly said. Previously, The Browns had been awarded the Top Horizon Group of the Year for three consecutive years.

Even when they’re not on stage or on tour, the Browns manage to stay plenty busy on their farm property west of Le Mars, Iowa, which has served as a family haven when they aren't on the road.

Adam says, “We enjoy life at home. There’s just something about being in the country. I’ve always enjoyed it”.

Andrew, the self-proclaimed life of the party, said touring on the road can get a little crazy, but he’s been able to put things into perspective. “I’m thankful for what I’m doing,” he said. “I think it’s a special thing that we do.”

To add to the family experience, Shelly’s husband Keith is the chief bus driver and sound technician. “Because we know we’re called, it’s been worth it all. God has opened the doors and there are adventures and blessings behind each one.”

From singing over 30 shows at the Americana Theatre in Branson, MO, to Dollywood Theme park stages, to singing on over 10 Royal Caribbean and Carnival cruise ships, this award-winning family will inspire listeners with their close-knit family harmony and talent.

The family opened The Browns Century Theater in downtown Le Mars in 2015 and recently completed a renovation this fall. While they still tour around the world, they now have a home base for sharing their music. And don’t be surprise if you see the family caroling during the winter season; one of their favorite times of the year.

Brown Family Shares their Love of Christmas and Family Traditions

With excitement, the Browns will be sharing their musical talents at St. Joseph Catholic Church in Milford at 4:30 p.m. on Sunday, Dec. 8. The Arts Council of St. Joseph is sponsoring the freewill donation event, along with United Community Bank and the Patrice and Rita Leary Foundation.

This time of year, the Brown Family Christmas is more than a concert, it’s a show. Their “Classical Christmas” features a melodic mixture of vocals and violins, promising a high-energy performance without forgetting the reason for the season. Different segments of the Sunday show will feature traditional Christmas carols, Celtic music and a selection of songs for children.

For more information on the concert, contact the St. Joseph Catholic Church. To learn more about the Browns, visit thebrownsmusic.com.