A 400-meter oval track has been a common bond between a Spirit Lake boy and a Spencer girl. The one lap race brought the two together, connecting Kevin Martinson and Taylor Glover in 2012 at an Indoor Lakes Conference Track Meet at Buena Vista University and later as teammates at Mankato State University.

While this mutual love for competitive running has played a strong component in drawing the couple together over the years, their love for the Iowa Great Lakes area drew them back to their roots and the location for their gorgeous Okoboji wedding.

On October 19, 2019, Kevin and Taylor tied the knot on a beautiful fall day, with their ceremony at the Presbyterian Church in Spirit Lake and the reception at the newly renovated Roof Garden in Arnold’s Park.

Kevin and Taylor initially met in the fall 2011 at a dance in Spencer. The couple enjoyed several dances together but didn’t really know each other.

The two runners reconnected during the spring 2012 track season, as their high schools were in the same conference and district, and Kevin and Taylor ran at several meets at the same location. The first meeting was the Indoor Lakes Conference Track Meet where Taylor entered the meet and saw Kevin warming up with his best friend Luke Kabele.

The two shared some awkward glances towards each other, but they didn’t talk.

On the bus ride home, Taylor made the first move and broke the ice with this text, “Have you been lifting? You look a lot more buff!” 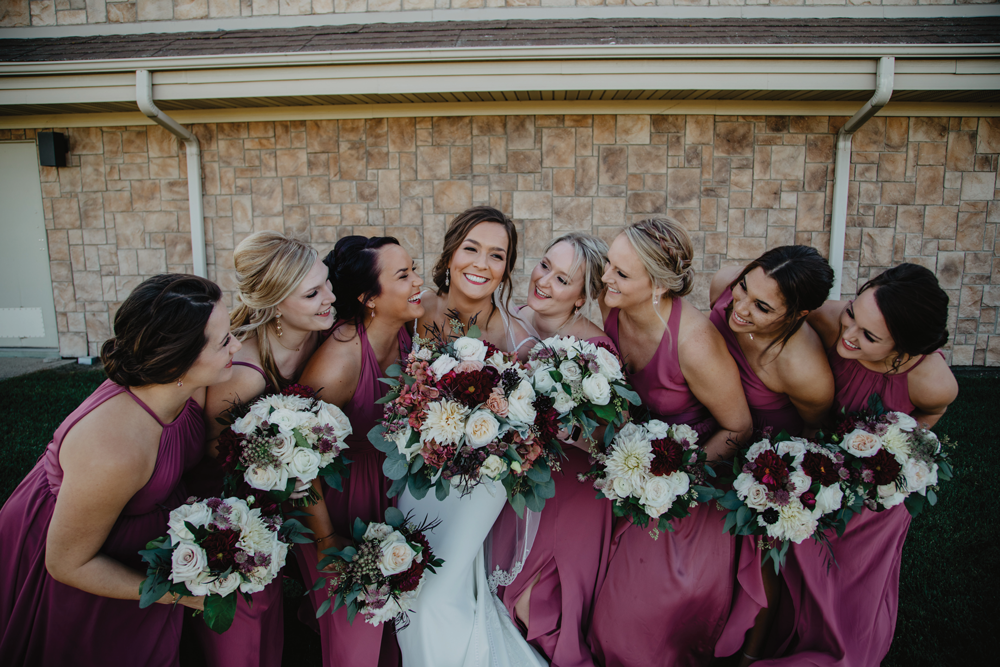 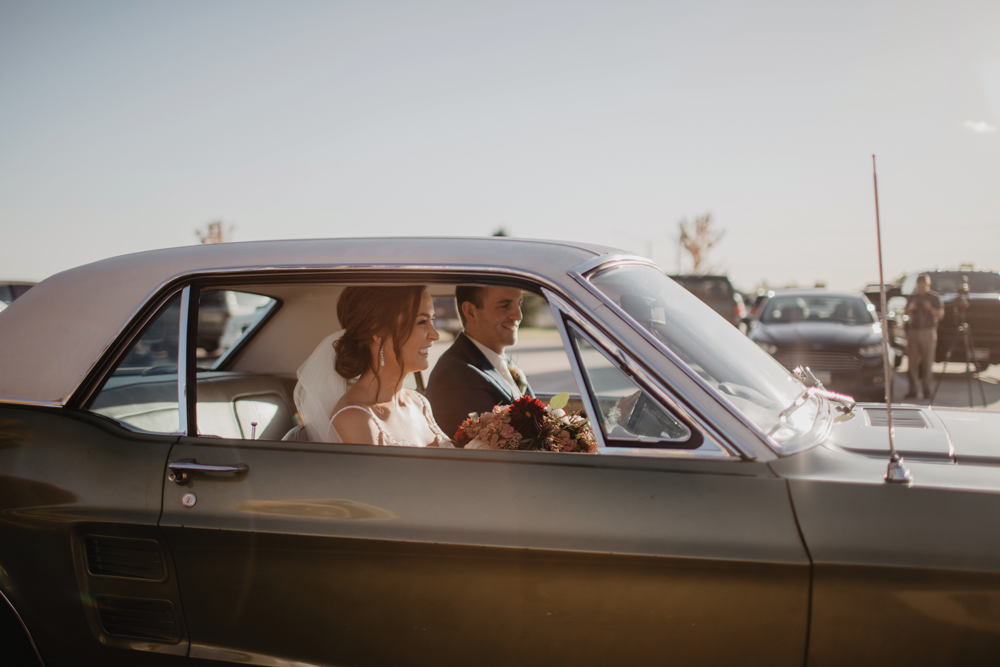 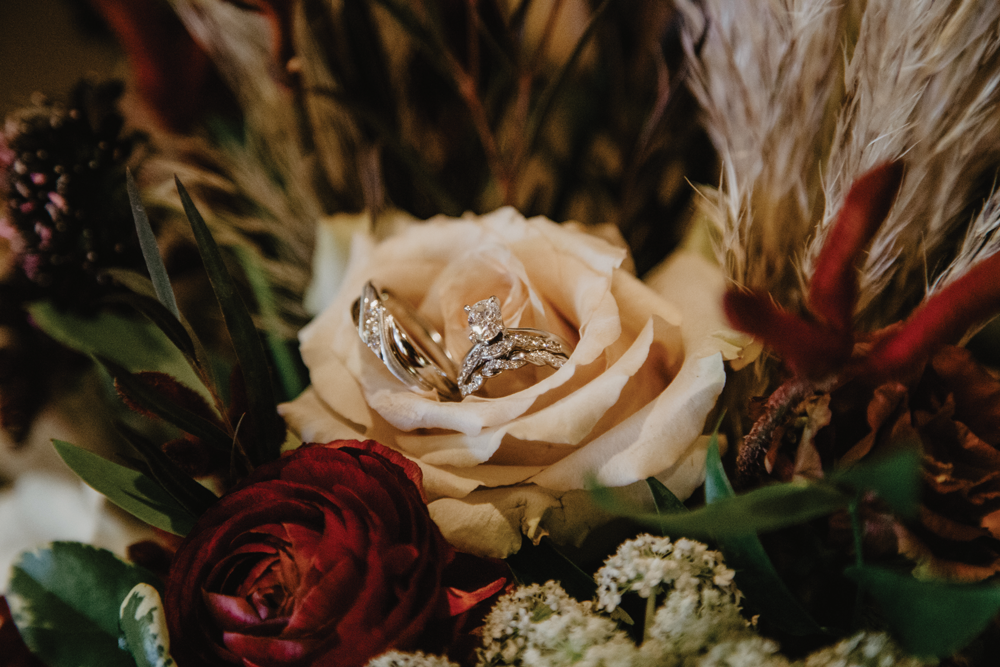 “Oh, my word! Talk about ultimate face palm moment,” Taylor said. “However, thankfully Kevin replied and I was beyond excited.”

Kevin added, “I’ve always loved Taylor’s awkward and quirky personality. It was one of the reasons I replied!”

The two continued to see each other at different high school track meets. They would text the day of the meet and talk about which events they were running. If they were running at the same meet, the couple would exchange a short conversation in person but the relationship didn’t go much deeper.

Kevin and Taylor’s story took a promising turn in June 2012, after Kevin invited Taylor up to Lake Okoboji for a day of fun out on the water. They enjoyed boating and wave-running together. “This is when I asked Taylor if we could ‘make things official,’” Kevin said.

Taylor added, “And I being the most awkward human being on the planet replied with, ‘I think I want to say yes but let me ask my mom!’ However, you have to realize my mom and I are very close, and she of course said yes!”

"I turned around and Kevin popped the question! I was literally shocked. I could not get over how well everyone pulled off the surprise of a lifetime.” 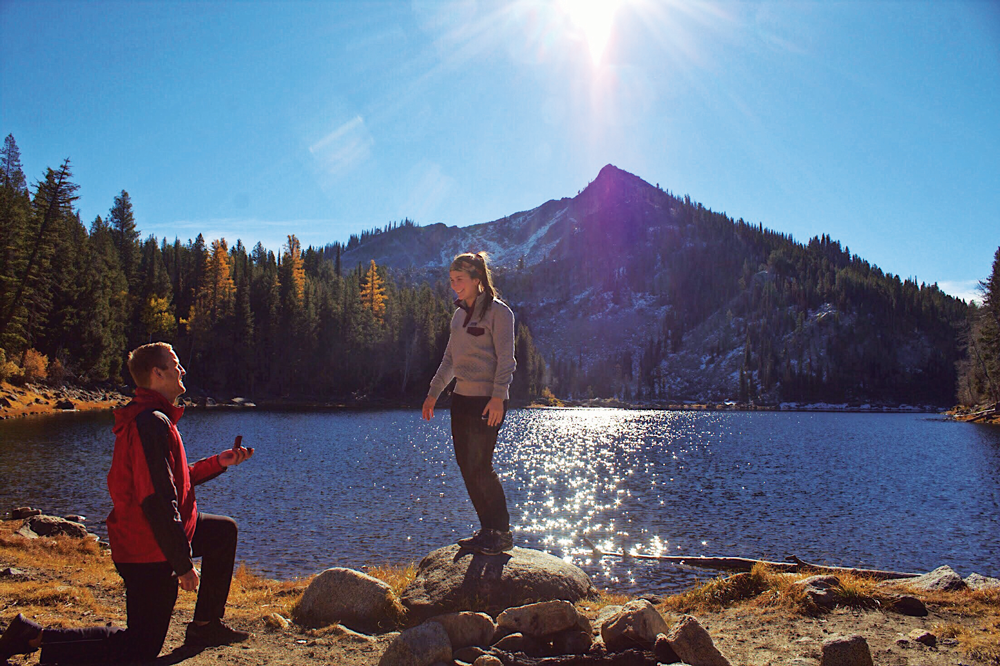 The Proposal
Taylor says Kevin kept the proposal a complete secret from her, as well as her mother Cindy!

“He did a really good job of including everyone in our families, except my mom because she can’t keep a secret to save her life!” Taylor exclaimed.

About a month prior to the proposal, Kevin and Taylor's brother Austin visited Helzberg Diamonds in Des Moines to pick out the engagement ring.

“I hadn’t given Kevin much information to go on because I never pressured Kevin to propose to me. I wanted him to be ready and I didn’t want him to propose just to make me happy. He picked out the perfect ring by the way!” she said.

Kevin took the ring home to Spirit Lake and showed his family. He then asked permission from Taylor’s father, Allen.

“Since, we already had a trip planned to see Taylor’s brother, Scott, in Idaho, I decided it would be a perfect time to propose!” Kevin said.

On Sunday, Oct 21, 2018, Kevin and Taylor hiked out three miles to the base of Jughandle Mountain and along Louie Lake. They went with her brother, sister-in-law, brother’s friend Josh and his girlfriend.

“Josh was the leader of the hike and was carrying a camera. I commented on how I thought it was cool he was into photography,” Taylor remembered. “Come to find out later, Josh actually borrowed the camera from a friend and carried it that day to take pictures of the proposal! I had no suspicion of ANYTHING going on in the background.”

The group pulled out their sandwiches and enjoyed lunch. Taylor was slowly eating and munching on her chips. Finally, Kevin got impatient and told her to put the chips away so the two could go touch the water and check out the lake. Josh took some pictures of the couple while they were exploring the water; Taylor still oblivious and didn’t expect anything.

Then her brother Scott told her to stand up on a large boulder, face the lake and spread out her arms like she was at the top of the world. This was when Kevin snuck behind her and got down on one knee.

“So, I was like ‘okay, sure that would be a cool picture,’” she said. “Then my brother went ‘Okay got it,’ and I turn around and Kevin popped the question! I was literally shocked. I could not get over how well everyone pulled off the surprise of a lifetime.” 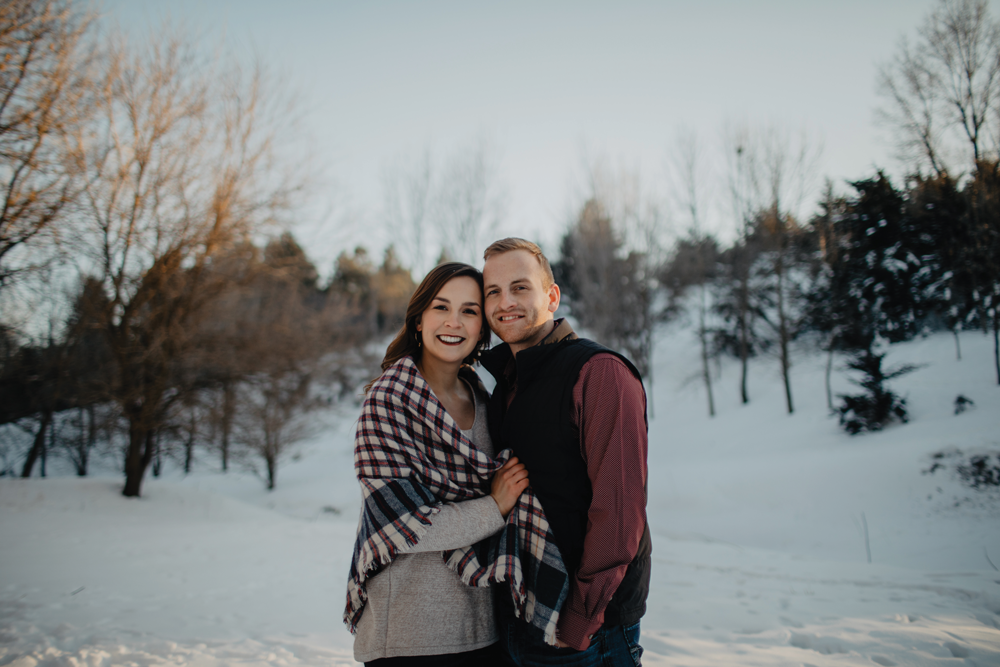 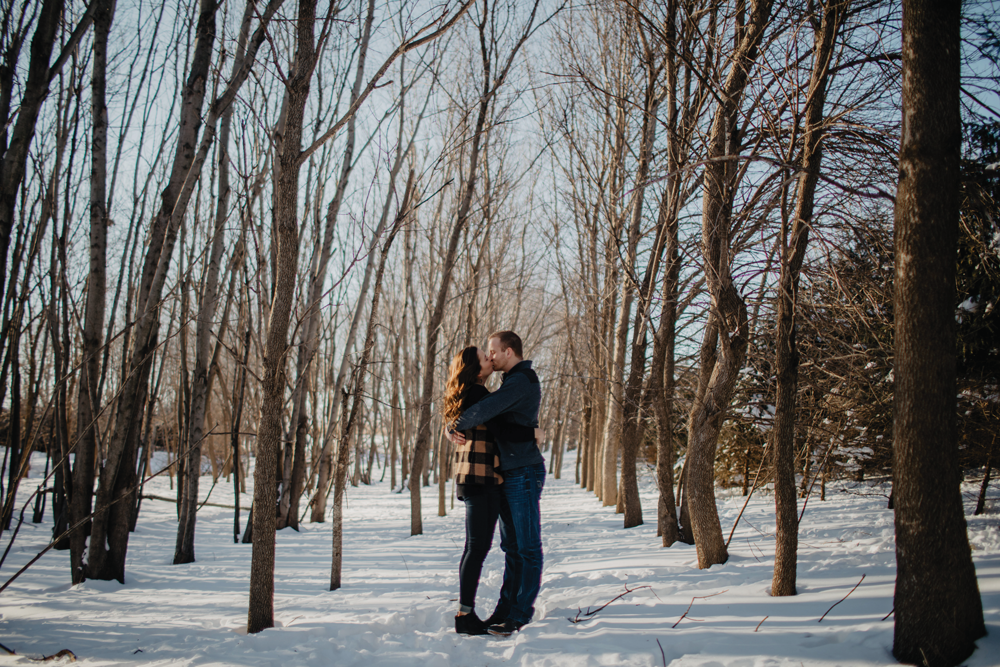 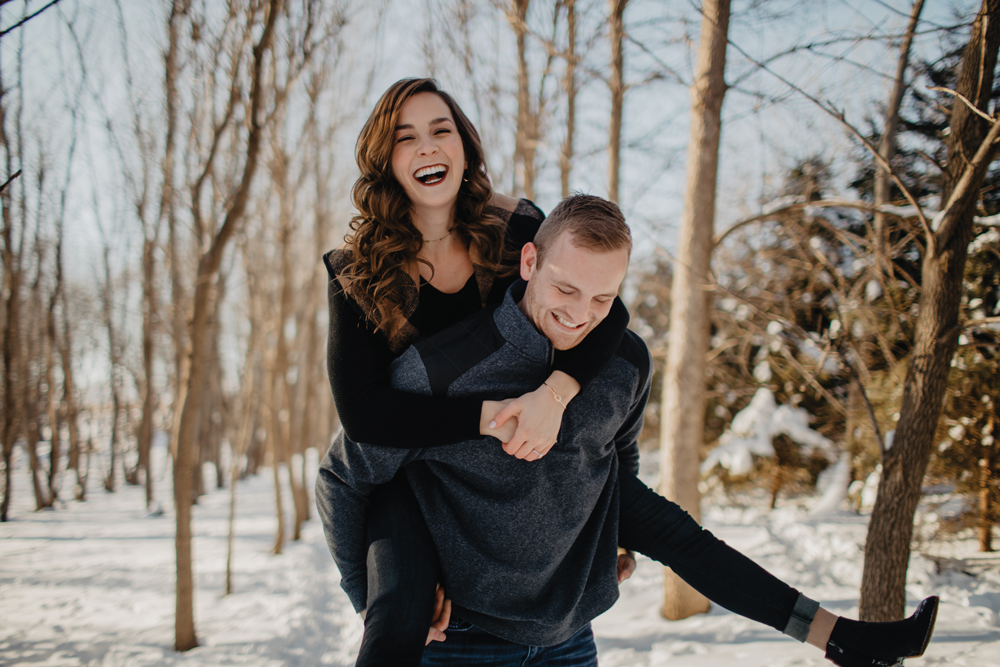 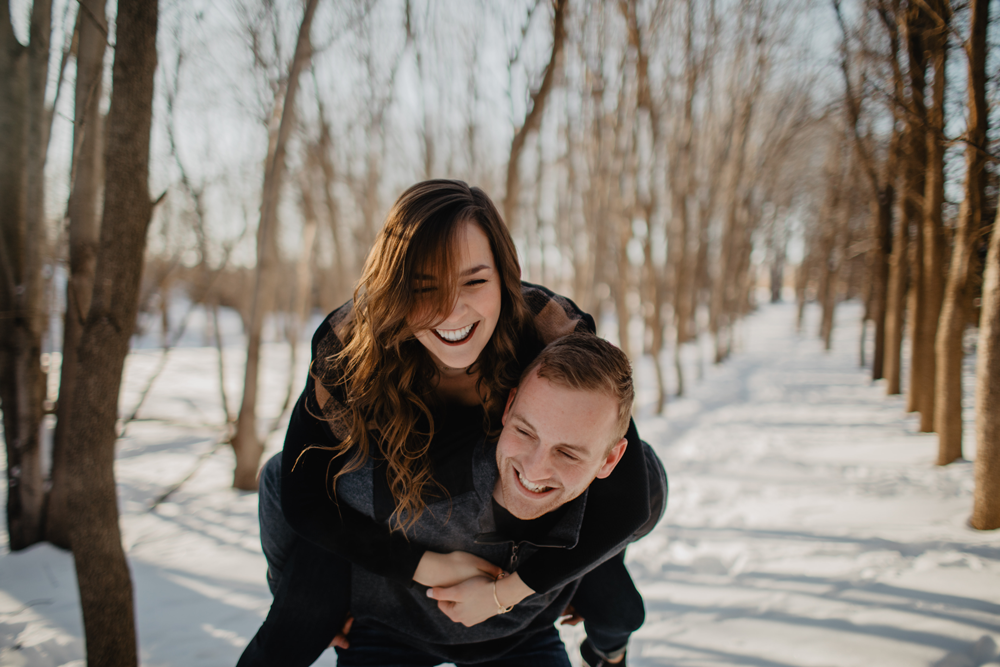 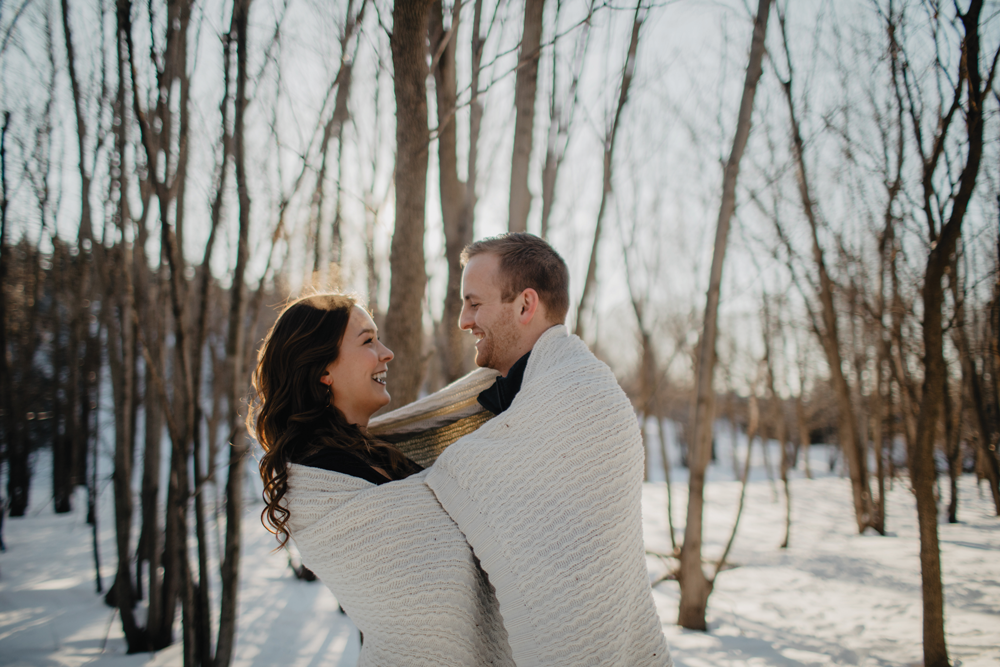 Planning the Wedding
After the couple’s engagement, Taylor immediately began planning for their upcoming fall wedding. They booked locations and chose services for the big day. Taylor enjoyed planning many of the details herself, although she said Kevin helped with errands and with the invitations.

The colors Kevin and Taylor selected for the wedding were mauve and dark royal blue with gold accents.

“It sounds like such an odd color combination but I stumbled upon it on Pinterest,” Taylor added. “I really liked the color scheme because it was something different and the colors gave off a fall vibe. However, I wasn’t sure how the colors would play out, even up until the wedding.”

Once Taylor saw everyone all dressed up, she absolutely loved how the colors turned out. “I’m so glad I trusted my gut on that one,” she said.

The girls’ dresses came from David’s Bridal and Taylor’s dress was a special find at Modern Dress Bridal Boutique in Boone, IA. She had already visited three bridal shops in Minneapolis and liked one particular style but nothing had the “wow” factor. Taylor and her mom decided to stop at Modern Dress one weekend, while they were in Des Moines visiting her brother.

“It was an amazing experience to have so much expertise focused on me exclusively,” she added.

Taylor showed Colby John the dress she had liked from the bridal shop in the Cities. After he looked at the picture, he went “I have that dress but on steroids.”

Taylor fell in love with the form-fitting creation, spaghetti straps, v-neck and long train. “When I had it on, I felt like a BRIDE! I had not felt that with any other dress, so I knew it was the right one.” She still tried on other beautiful dresses from his collection, but in the end, she went back to her first selection and added a veil, shoes, and jewelry, which were purchased from Modern Dress.

“My mom instantly started crying, which confirmed that it was my dress!” she said.

Another way the colors were displayed at the wedding was through the floral bouquets, which were designed and created by Ferguson’s Floral of Spirit Lake. The pink and burgundy bouquets were filled with café au lait dahlias, cappuccino roses, antique hydrangeas, ranunculus, astrantia, scabiosa, assorted dahlias, garden roses and mixed foliage. The couple kept the décor simple at both locations, only using two bouquets at the front of the Presbyterian Church. The color palette of white, gold, and green at the Roof Garden also didn’t require a lot of extras. Taylor used floating candles and white hydrangeas from Ferguson’s for the centerpieces on the tables. Vases from Grand Occasions and white tablecloths from Campus Cleaners were rented.

“Everything turned out beautifully,” Taylor said. “I chose flowers that would match our color scheme but also gave a fall vibe. Since I don’t really love oranges and red, I requested the burgundy/purple tones. Kimberly Henning, the floral designer, from Ferguson’s did an amazing job and went above and beyond what I ever imagined."

Playful Cupcaketions by Heather Baumgard from Spirit Lake created a small two-tiered white classic wedding cake for the special day, just for the bride and groom to share. Taylor said they chose vanilla cake with vanilla frosting, as both Kevin and her love the classic version. Nutty Bars and Frozen Bananas from the Nutty Bar Stand were served to the guests as their desserts. “They are so good and such an Okoboji staple,” Kevin said.

After spending a few hours decorating and preparing on Friday, Oct. 18, the wedding party and both families met at the church for the rehearsal. After the walk-through, everyone reconvened in the beautiful backroom at The Hutt Bar and Grill in Arnold’s Park for the rehearsal supper. 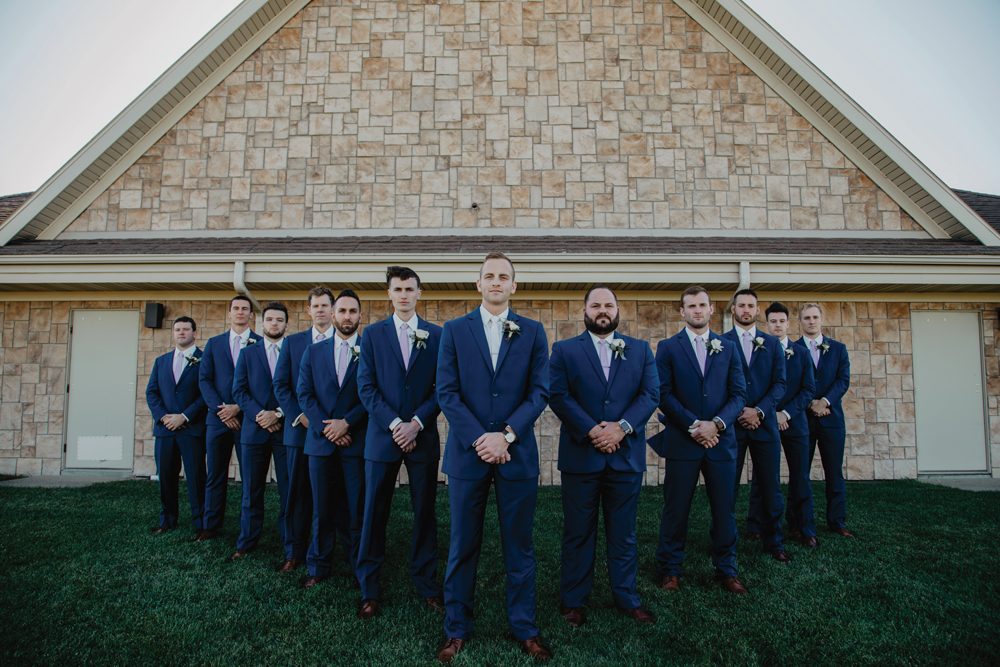 The Big Day – October 19, 2019
There was huge anticipation to see each other on the big day. In the morning, Taylor and her bridesmaids had their hair beautifully transformed at The Hair Team in downtown Spirit Lake. Then they came back to the Presbyterian Church to get ready. Chelsie Kaminska from Boji Breeze did the ladies’ makeup, and earlier in the week, their spray tan.

“I definitely did more make-up than I normally do, as I can be pretty minimal, but it was definitely worth it and Chelsie did a great job,” Taylor said. “It was just enough!”

During preparation, Kevin and Taylor would sneak around the building, trying not to run into each other. At times, they would go behind the church to go to the other side. “I had orders I couldn’t see her,” Kevin said with a smile.

However, the specialness of the first look made the wait worth it. Taylor came from behind Kevin and put her head on his shoulder. “I couldn’t see her but could feel her,” he said. “When I turned around, I was blown away by how beautiful she was!”

After the first look, the two read letters they had written to each other. Taylor said it was very emotional and so sweet. “I wanted to read to Kevin so he could understand what I wanted to portray,” she added. “They were special moments and set the tone for the rest of the day.”

Wedding photography was done by a wife and husband duo and friends Emily and Andy Moore, from A Couple Moore Photography. Kevin and Taylor had their main family pictures done at the church. After the ceremony officiated by Pastor Clint Loveall, the couple met everyone at Snappers and took special pictures on the restaurant’s dock. The videographer of the day was Table 20 Creativity out of Des Moines.

Kevin and Taylor drove away from the church in a 1967 medium olive metallic Mustang, a car filled with special memories and history. This was a vehicle Kevin’s dad Rory purchased for $175 when he was 16-years-old and the engine was located in the trunk. During Rory’s junior and senior year, he rebuilt the car in high school shop class and then drove it for years. In 1990, Kevin’s parents drove away in the same Mustang for their wedding. Once the couple had kids, they needed a more practical ride and the car was stored at Rory’s parent’s home in Radcliffe, IA.

“Grandpa started tearing into it 15 years back and took it all apart,” Kevin said. “He was gradually rebuilding it, but then he got cancer and wasn’t able to finish. He passed away a little over a year ago, so I convinced my dad we needed to finish it.”

The father-son duo got the car onto a trailer and brought it back to Spirit Lake. The two men spent a lot of hours putting it back together, and they finished the car three weeks before the wedding. 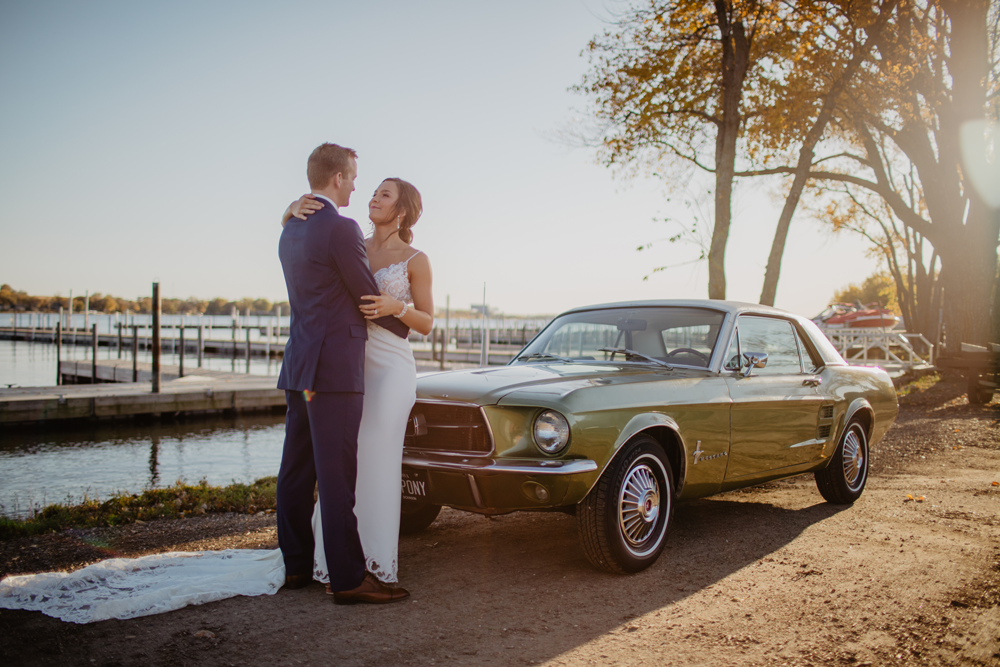 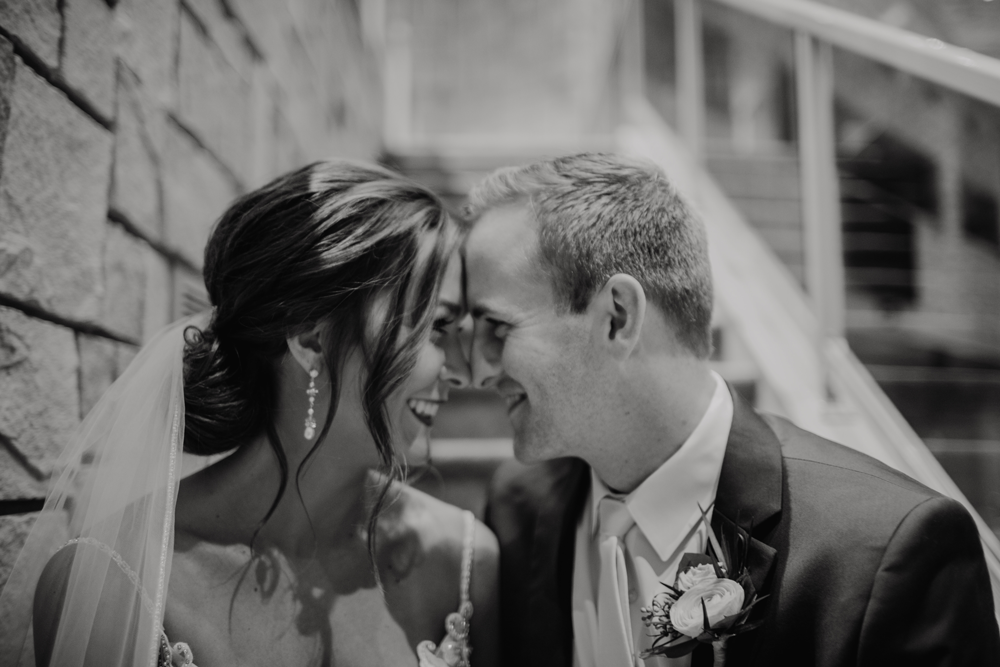 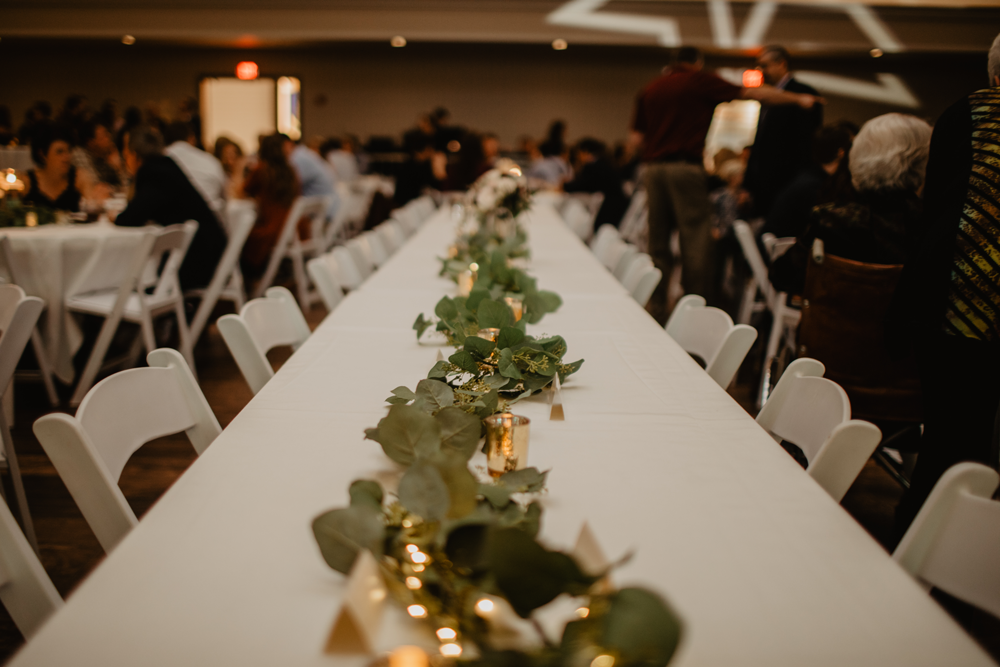