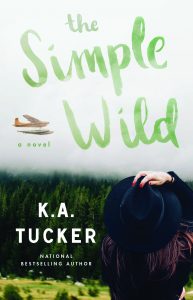 The Simple Wild by KA Tucker

2020 has been an exceptional reading year for me and The Simple Wild is at the top of that list. I have to say, it easily became one of my favorite romances ever! This book was beautiful and adventurous. I always love a story set in Alaska because it’s so gorgeous and far away, but she also did a great job of showing the day-to-day way of life and how it’s not easy to live in such a harsh environment. It was so raw and relatable throughout the entire story. While I didn’t love the characters at first, I think a clear transformation in characters is essential to a great story, and I absolutely saw that in Calla and Jonah.

The story begins with Calla Fletcher, a young professional living with her mom and step-dad in Toronto with a busy life and a successful fashion blog. When she learns that her father has a terminal illness, a man she hasn’t seen since she was a baby, she makes a very difficult decision to go to Alaska to get to know him before it’s too late. Calla is not cut out for Alaska with her glamorous way of life, and she finds the remote Alaskan town swarming with mosquitoes, wildlife and crazy daylight hours almost intolerable. Not to mention, her father’s right hand man, a young pilot named Jonah, is extremely rude to her and has written her off as a “Barbie.”

As time goes on, Calla bonds with not only her father but also this burly bush pilot. She discovers the Alaskan way of life is all about working hard and helping each other, it’s all about family. As their friendship grows, Calla begins to think about something more but she’s scared of making the same mistakes are her mother.

This book was so hyped and everyone told me to read it, but that often scares me away. I’m so glad I finally gave this one a chance because it’s an absolute gem! KA Tucker explores love, family, America’s last frontier and so many struggles of a young woman on the brink of finding herself, simultaneously.  There are so many deep relationships that come through and this cast of characters is unforgettable down to the villagers they visit only once. I highly recommend this one and even more exciting, the sequel, Wild at Heart was recently released! 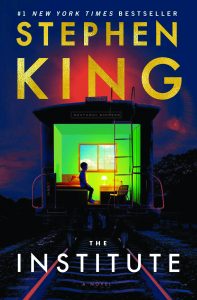 The Institute by Stephen King

I’ve always been a huge Stephen King fan, since I was a little kid trying to read everything my brothers told me to read. I would hide up in my room with books like Cujo and Tommyknockers, a bit terrified but always so captivated. I can absolutely say, King has only gotten better with age.

My brother bought the physical copy for me as a gift, but I actually ended up listening to this entire book, the narration by Santino Fontana was fantastic. This novel was intimidating, 18 hours of audio, over 500 pages. Friends warned me that it slowed in the middle, but I never felt that way! I so appreciate King’s ability to build characters’ backstories so completely while mixing in action, and moving fairly seamlessly through different perspectives.

Our protagonist, Luke Ellis, is a genius. He’s the type of child who takes the SAT at 12-years-old and gets admitted to the college of his choice. He is also gifted in another unique way that looks a lot like telekinesis. Just as he is coming into his own, he is taken from his home in the night, and wakes up in the institute with dozens of other gifted children like him.

“In the most sinister of institutions, the director Mrs. Sigsby, and her staff are ruthlessly dedicated to extracting from these children the force of their extranormal gifts. There are no scruples here. If you go along, you get tokens for the vending machines. If you don’t punishment is brutal. As each new victim disappears to Back Half, Luke becomes more and more desperate to get out and get help. But no one has ever escaped from the Institute.”

This was such a wild ride through the entire 550 pages! I didn’t even mention the other storyline but everything is so well done as the two worlds collide. The Institute was a unique mixture of horror, suspense and sci-fi and I really think it’s one of King’s best novels.