The minute you walk into Dr. Rick and Barb Wilkerson’s summer cottage along West Lake Okoboji you feel at home. The warm environment entices a sit-down conversation, knowing a “How are you?” is soon to come. At the same time, the house built in 1920 is filled with pockets of space ideal for the pitter-patter of feet. 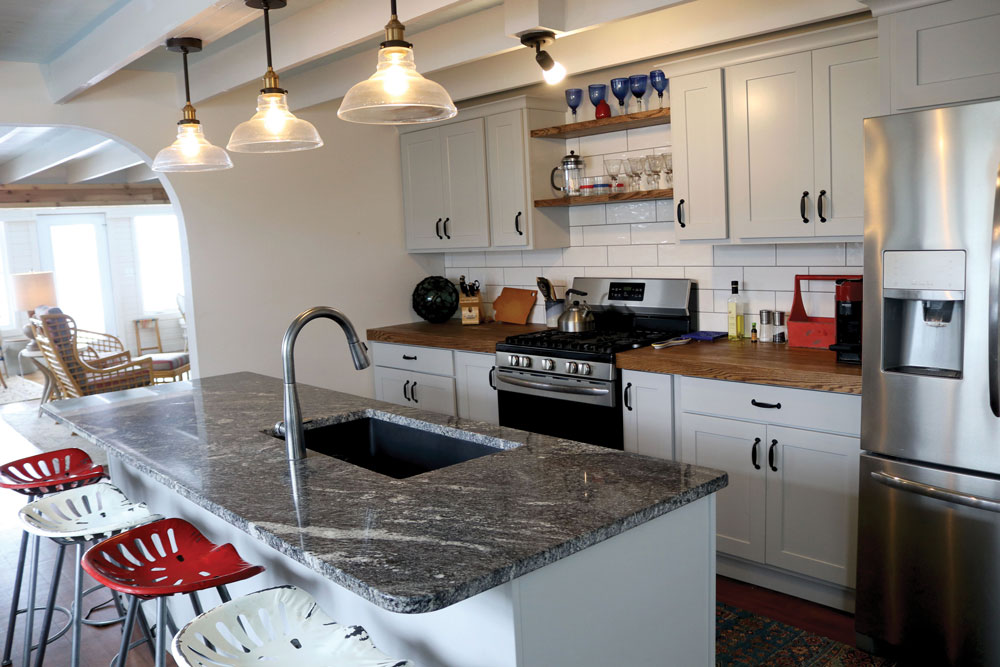 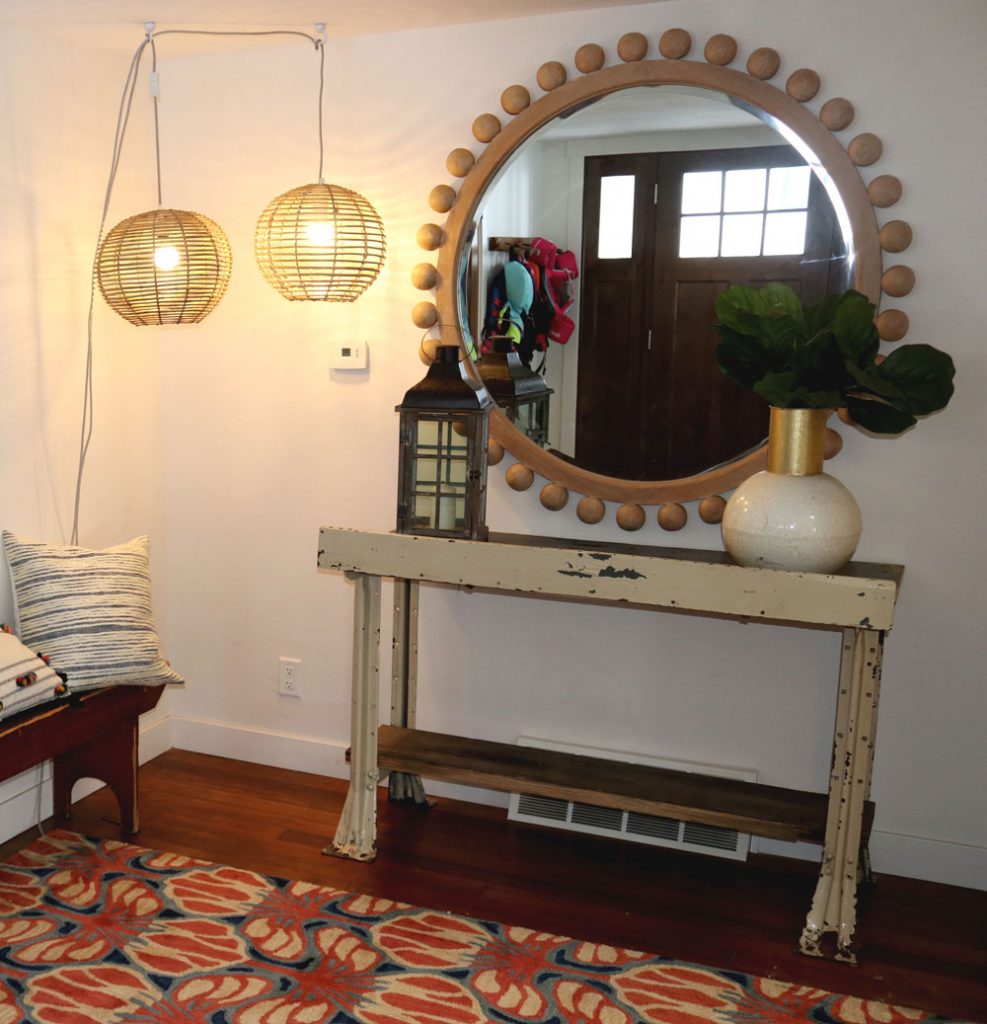 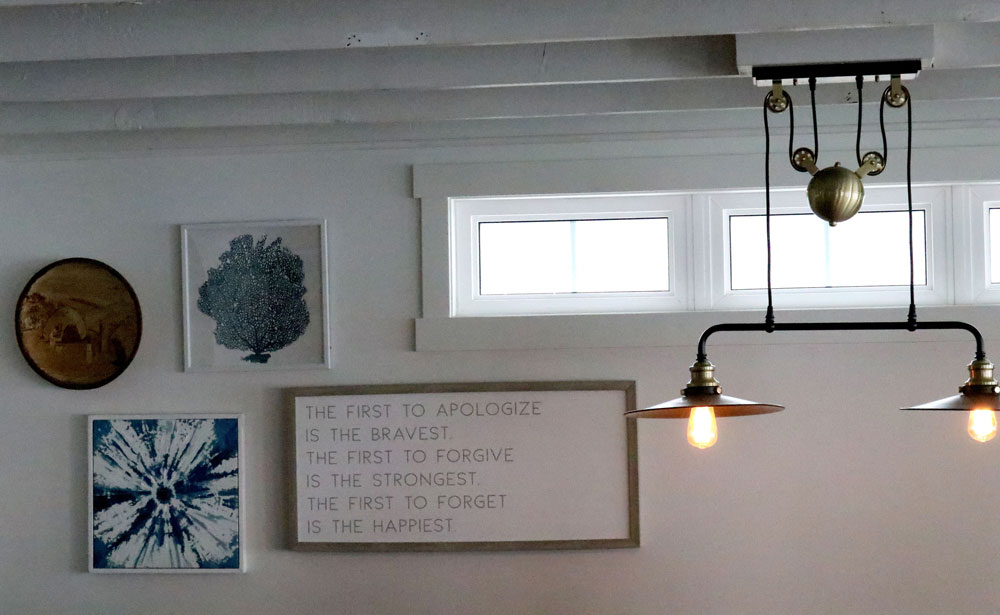 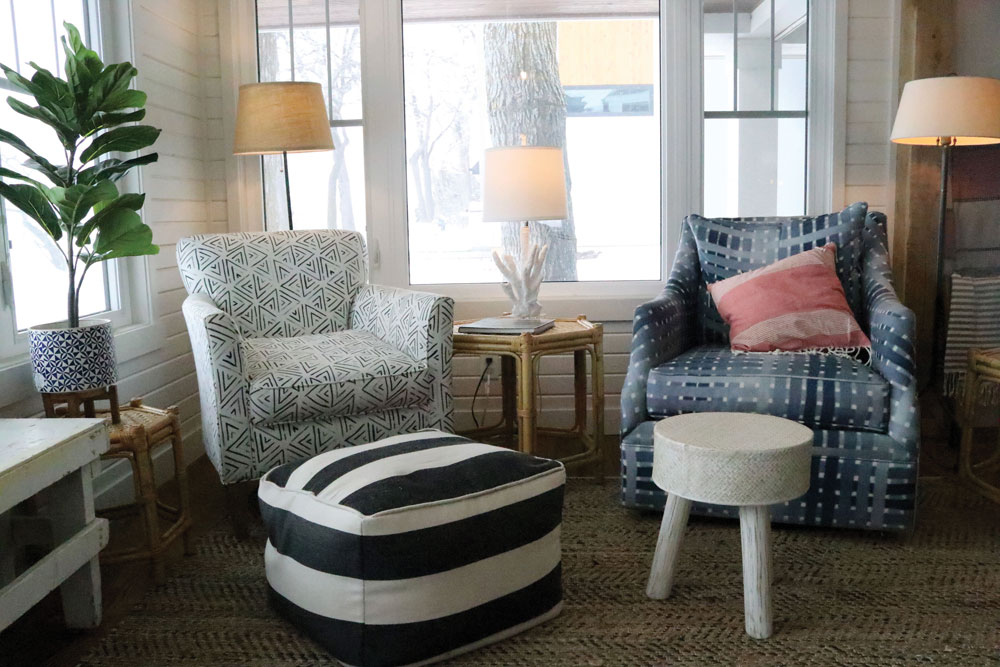 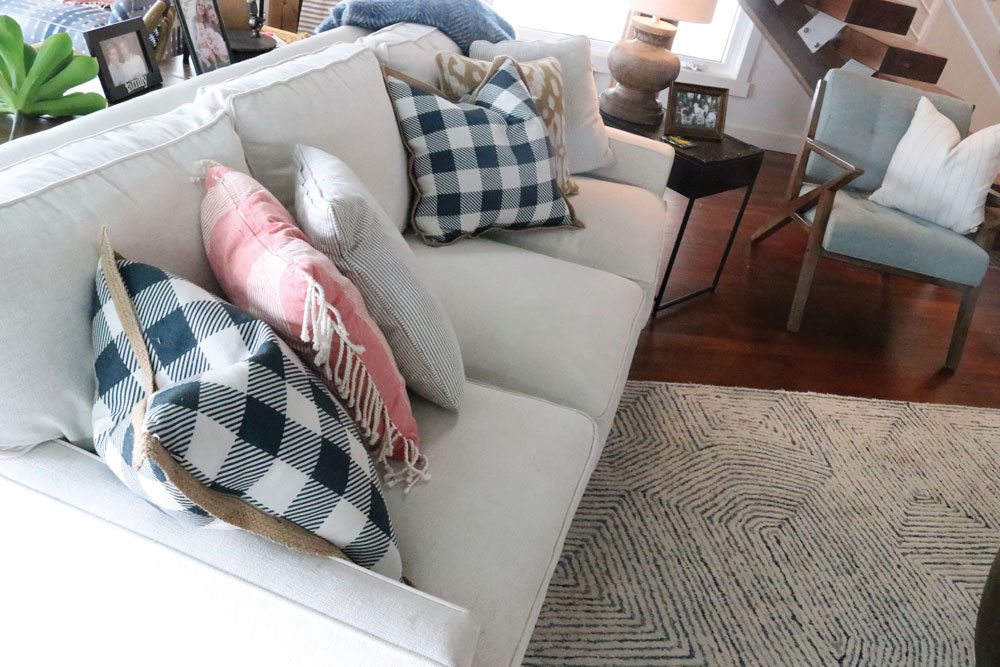 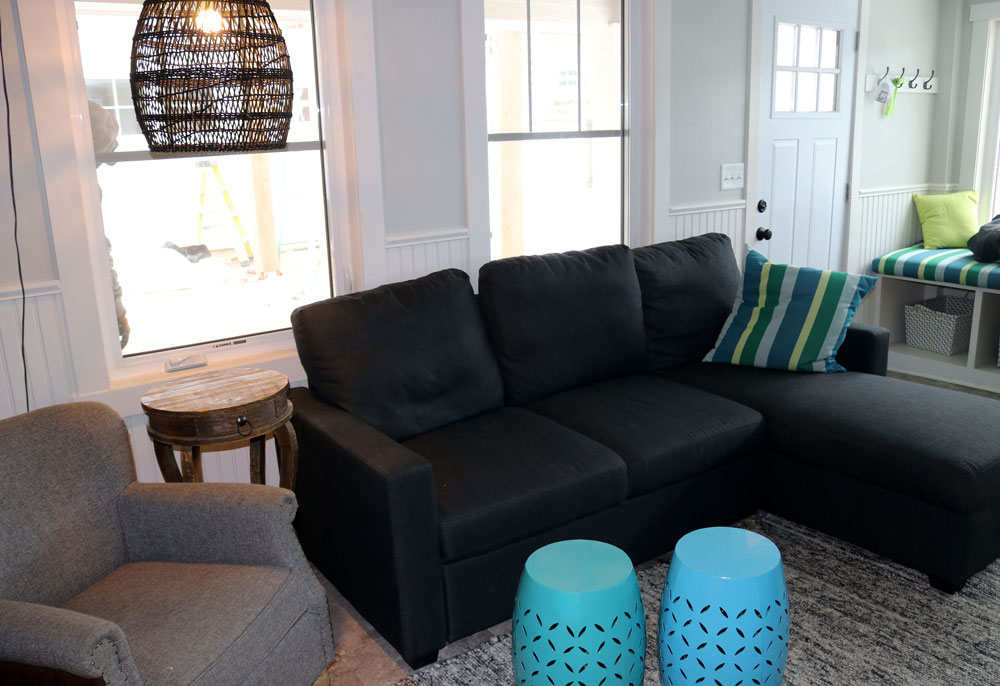 Lee Custom Homes Transforms 100-Year-Old Property Along West Lake Okoboji
The home wasn’t quite as adaptable to large groups of people in 2015, when the Wilkerson’s first purchased the property. They loved the location but wanted a space that was ideal for their large family.

“We purchased the summer cottage because I wanted a magnet to bring everyone back home together,” Barb said. “We have nine children and four of them are married with kids. We wanted a space for everyone to be comfortable in.”

Figuring Out the Space
As the Wilkerson’s began to create a summer home for their family, they quickly discovered that the house required more usable space. The kitchen was the size of a galley and only fit one person in it at a time. There was also an attached three-season room that wasn’t ideal for colder temperatures and the property needed more bedrooms and a larger garage.

“The kitchen would only allow one person at a time, and when you’re cooking for thirty plus people, you don’t want to cook by yourself. We obviously wanted a larger, more usable kitchen,” Barb said. “The goal was to sleep and feed as many people as possible.”

However, there were numerous unique qualities the Wilkerson’s didn’t want to lose in a renovation, such as keeping the original floors and ceiling details and the original stone fireplace.

She said they loved the height of the ceilings and the gorgeous lake view, as well as the unique stone fireplace. “We believe the fireplace is original with the first house,” she added. “There are so many fun pieces with this house; it has so much character.”

Finding the Right Builder
The Wilkerson’s had been very happy with their general contractor, who they had used for 30 years and had built their home in Spencer. However, he was at a point in his career where he didn’t want to take on a project of this magnitude. Rick and Barb began looking for a new builder.

“I was looking at a magazine with my daughter, and we came across an ad for Lee Custom Homes. Cara knew Derek in high school and said we should call him,” Barb said. “Derek and Dan Lee were perfect for what we needed, and we’re so thankful they still had the enthusiasm to take on this job. We easily could’ve torn down the house, but we wanted to have a cabin on Okoboji filled with love—a mixture of old and new home.”

Renovation Process
Lee Custom Homes began working on the property in late September 2018. The initial project included removing the existing garage and building a new two-car garage with living space located above, while connecting the garage to the house.

“The garage needed be moved, as during any rain, water would pour down over the asphalt and into the house and onto the lake,” Barb said. “We have the second highest bank on the lake.”

This then led to replacing all of the windows and siding on the existing house to match the new garage. The wraparound porch was updated with a new wood ceiling and square columns.

Once those portions were complete, Lee Custom Homes began working inside the home. During this time, Dan and Derek ran into a few surprises. As they began to open up the space, they discovered the house was barely standing up.

“It was like a pole barn and previous additions had cut through supporting beams. 75 percent of the house was being held up with really dense air,” Dan said. “We did a lot of invasive surgery to make sure the home wasn’t going to fall apart.”

The foundation was only 20 inches below grade and the floor system for the south bedroom wasn’t even attached to the wall. They jacked up the home on the street side, moving the bedrooms up six inches. The crew also discovered that someone had framed a new roof on top of an old roof and the wraparound porch was rotting away.

“Before we started working in the home, the doors wouldn’t close,” Dan said. “Now, the doors are perfect. The house isn’t moving.”

Barb was very appreciative of Lee Custom Homes in how they saved the cottage. “When they were opening up the house, Dan kept calling Rick with all of the surprises. He finally said stop calling, just do what you need to fix it.”

Lee Custom Homes began working their magic and transformed a kitchen galley into a space ideal for a group. They relocated the kitchen closer to the back entrance and removed a wall between the existing living room and three-season porch. This space opened up an area to place two large tables, making it easier to feed their large family all at once.

The stairs was also relocated, as it initially was squeezed in by the fireplace and front door. “You would hit your head, at times, going underneath it to the front door,” Barb said.

The original blueprints didn’t include the stairs and were possibly added at a later time. Lee Custom Homes moved the stairs several feet to the north, opening up space for people to easily walk through.

“I hijacked the stairs,” Dan said. “We didn’t want to close them up but also wanted to keep them minimal, while protecting the kids so they couldn’t fall through the railings.”

The light above the stairs is a powerful conversation starter, as Dan and Derek created a light fixture out of bicycle rims. Poiema Design, a local interior design firm, provided expert decorating advice and had brought three separate lights for that space, putting them to work creating a fixture to hold them.

“It took four hours of Dan and I sitting up there trying to figure out the puzzle,” Derek said.

Upstairs, Lee Custom Homes expanded the master bedroom over the three-season porch and moved a bedroom to allow for the expanded staircase. Up above a closet, they built a little cubby for kids to enjoy quiet time. Cathy painted an “Under the Sea” theme, which has every grandchild’s name hidden within the artwork.

The crew also created another room on the east side of the house, specifically for the grandkids. All of the toys are kept there, and there’s a sandbox right outside the door. The space above the garage holds six bunk beds and trundles and fits 18 twin beds.

The Process
The Wilkerson’s really appreciated Lee Custom Homes and their overall knowledge and skillset they brought to the project.

“Dan is extremely gifted and has such a creative skillset. It’s more than just construction, he’s a huge problem-solver and always thinking outside the box,” Barb said. “Derek kept everything organized and always provided four options, for doors or paint, etc. It’s hard to look at everything, and I appreciated how he thought ahead and made it easy.”

Lee Custom Homes prefers to use local business when getting building materials. The kitchen cabinets came from Great Lake Counters and Kitchens in Lake Park, while the Gerkin windows, Bayer Built millwork, doors, and other building materials came from CFE in Spirit Lake.

There are a few detail projects to finish on the home, such as finishing the mantle on the original stone fireplace and installing the twin beds in time for summer. Landscaping needs to be finished in a few areas, to coincide with the new landscaping and re-engineering of the lakeside bank completed last summer by Blue Water Prairie Landscape.

Cathy and Heather of Poiema Design in Milford and Spencer oversaw the design aspect of the project. They tried to use pieces Barb already had, whether it was refinishing chairs or using Haitian pieces from their travels. Cathy said new items were many of the bigger furniture pieces, and they brought in lighting, art, and rugs.

“They wanted a home where kids could run and everyone would feel comfortable, so we found pieces that would fit that lifestyle,” Cathy said. “We had fun scouring secondhand places for chairs and antiques.”

The Wilkerson summer cottage is a mixture of old and new tied together in an appealing way. It’s a place to relax and call home from life’s chaos – a place where their family can gather!

“Dan and Derek helped us save an old cottage and with their ingenuity made the home functional,” Barb said. “The process was very enjoyable and not stressful, because of them.”

Rick is an orthopedic surgeon who previously worked at Northwest Iowa Bone and Joint in Spencer, but is now consulting and providing services at Winneshiek Medical Center in Decorah, IA. Rick and Barb also oversee a nonprofit organization called LOVE Takes Root, a ministry that grew out of a medical mission trip taken by the Wilkerson’s to Port Au Prince, Haiti, in 2010.