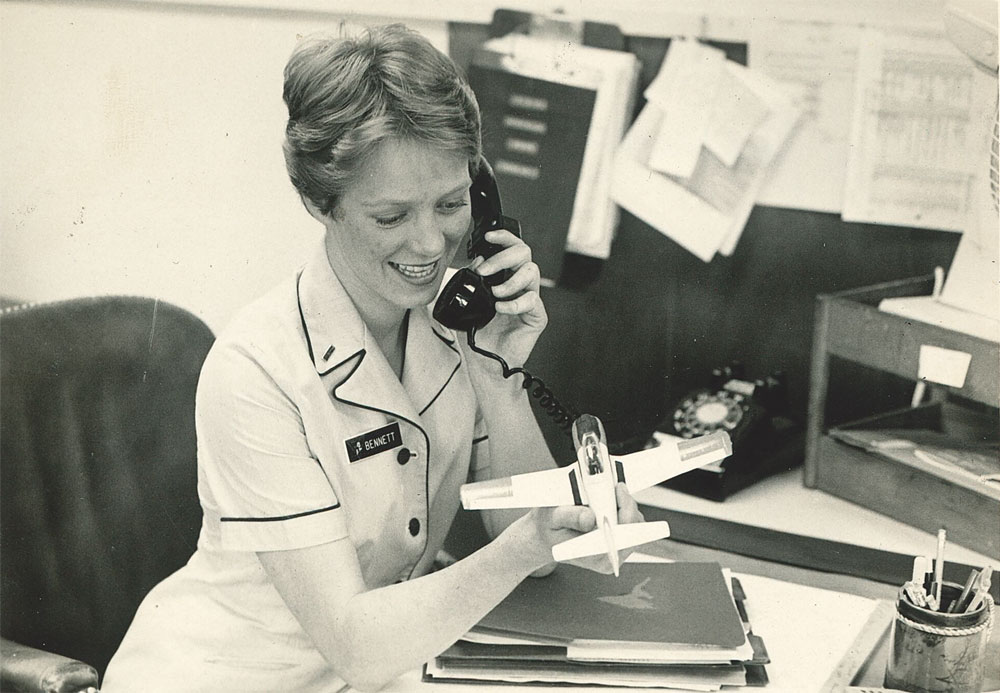 When Jan Bennett Despain was in high school in the 1970’s, a guidance counselor rebuked her dream of flying, telling her it was impossible and she should find a different career. “Women don’t fly planes!”

“When he told me I couldn’t do it, it just drove me to be in the air even more,” Jan said. “I’ve always wanted to fly, starting at a young age. Now, I’ve flown the world the equivalent of five times.”

From 1980-1983, Jan was the only woman pilot to fly a 53,000 pound turbo-prop (C-2A) onto the U.S.S. Dwight D. Eisenhower during the Libyan Crisis, as a part of the VR-24 composite squadron who supported three-five carriers patrolling Western Europe, the Mediterranean and Persian Gulf arena. The greyhound operations oversaw delivery of medivac patients, mail, parts, dignitaries, and the press to and from the ship.

“I’ve always had a heart for service and helping others, something I first learned working during Okoboji summers,” Jan said. “The sailors would be so excited to see me fly in with the mail, which also meant you usually got to land first.” 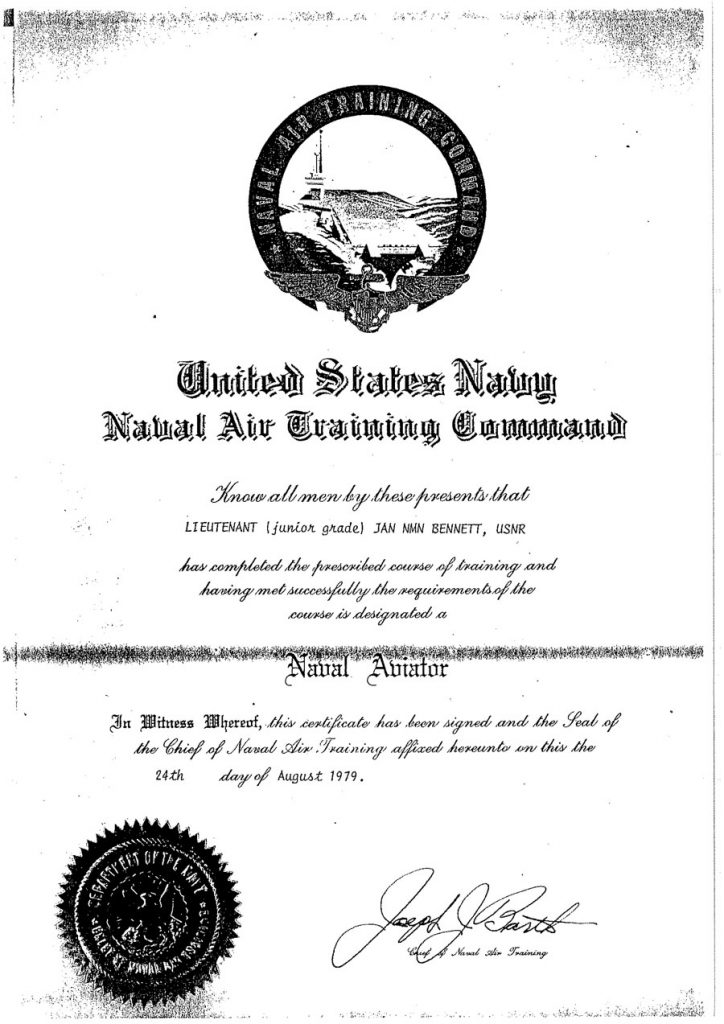 A Love for the Sky
Jan was born in Spencer and her parents farmed by Mapleton, IA. However, the summers were spent at their grandparents’ cabin off of Pocahontas Point in Okoboji. Jan would spend any available time at the nearby airport, often helping by wiping of windshields or filling planes with fuel. When she was 10-years-old, a gentleman asked if she wanted a ride in his plane.

“My eyes got really big and I was so excited,” she said. “We did circles around trees and the area. I just knew I had to be a pilot.”

From there, Jan began flying lessons at the Spencer Airport with Frances Anderson. She would save all of her money for lessons, often picking up extra jobs around the Lakes Area. At age 15, Jan became a certified pilot, but she had to wait for her driver’s license before official flying status.

After high school, Jan attended the Metropolitan State University of Denver, focusing on aerospace and a minor in meteorology. Immediately after moving to CO, she qualified for her Commercial Pilot’s License in Jefferson County in Denver.

“At age 18, I was the youngest person to ever hold such a license at the time,” Jan said.

To make money during college, Jan flew a small Cessna 310 in the middle of the night, flying cases of blood vials from Denver General Hospital to Phoenix, AZ. Her goal was to build up her flight time, while also serving her community.

In 1974-1975, Jan worked at the National Center of Atmospheric Research at the Stapleton International Airport in Denver. This led her to joining the Navy in 1976, where she underwent officer’s training at Newport, Rhode Island. However, her initial dream of being a pilot was denied - they discovered she had an eye issue.

“I was initially devastated. My parents had both been in the military. During World War II, my mother worked with burn patients in the Pacific and my father was fighting in Germany. I wanted to serve like them,” she said. “My P3 Squadron leader at Naval Brunswick suggested I undergo eye surgery, ‘You don’t have anything to lose.’”

It took six months for her eyes to heal, and she excitedly passed her physical. Jan was one of 15 women selected to start Navy flight training in 1978. However, this meant Jan had to go through Basic Fight Training and Survival School again at Naval Air Station in Pensacola, FL. The training is intense, with much of it spent in the water and regular five-mile runs in the sand in combat boots.

“I was the only female and also an officer, so it meant all of the guys had to salute me every time because I had seniority. They weren’t fond of that at first,” she said with a smile. “In Basic, you get really close with your team so by the end, the bond is strong.” 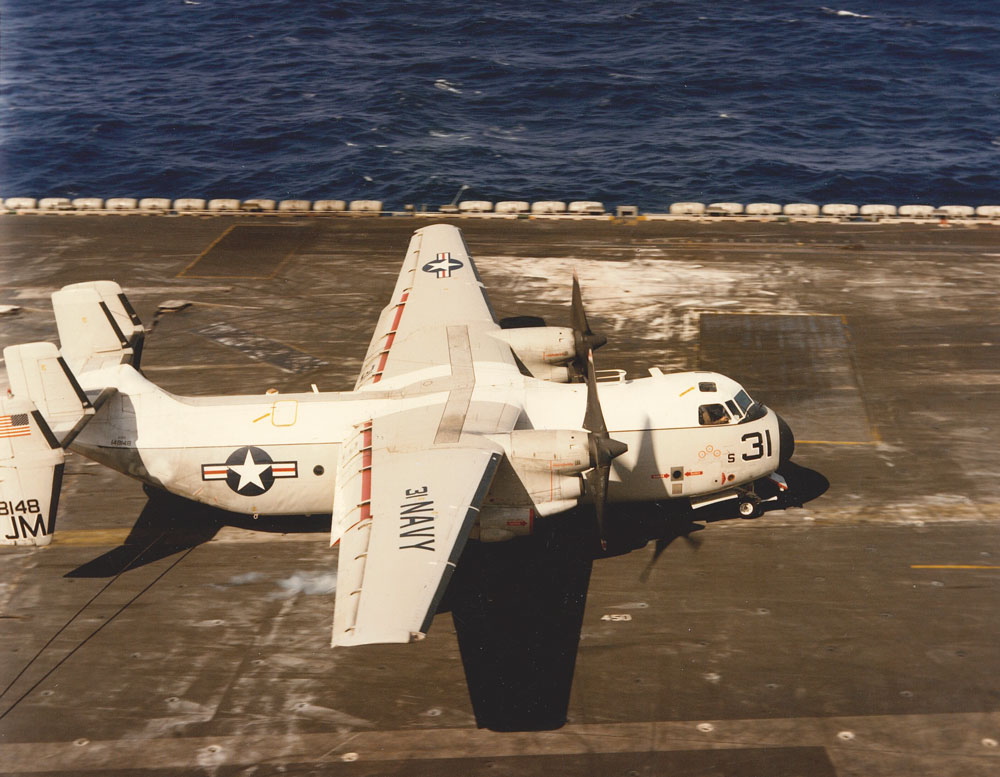 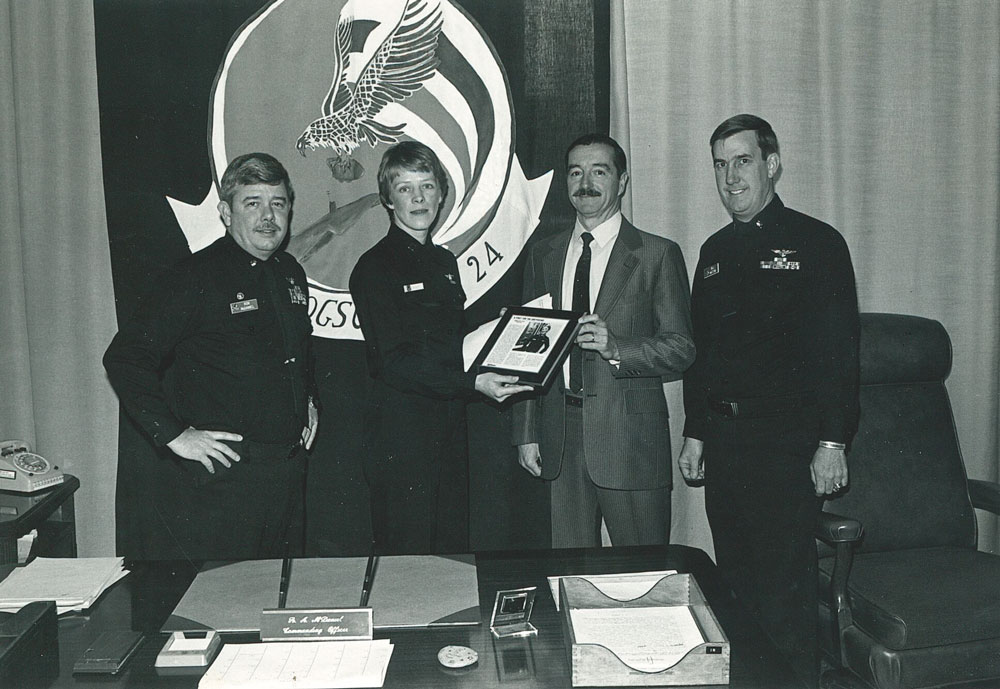 A Pioneer Woman
Jan’s mother Rowena, who also got her pilot’s license alongside her daughter, once said, “Jan is a pioneer woman setting a precedent for other women to follow.” At the time, females weren’t allowed to be combat pilots but they could fly other Navy aircraft.

Once Jan completed Naval Flight Training, she became designated as the 28th female Naval Aviator USNR and received Aircraft Carrier Landing Qualification with the Trojan T-28 onto the U.S.S. America off of Key West, FL.

There were seven students flying in her squadron when she carrier qualified. She led the squadron and received the highest marks of the group, while also becoming the first woman to qualify solo onto a U.S. AC Carrier by herself.

"It was truly an honor and amazing feeling to achieve a part of my dream," she said. "It was also an honor to qualify in one of the very few remaining T-28 Trojan C trainers before they were decommissioned. It was just something very rare about the sound and feel of a radial engine and the unique flight characteristics it had. Indeed, that airplane and flying it stole my heart and soul"

Jan received her Navy Gold Wings in August 1979, and then trained and carrier qualified with a E2C Hawkeye, a twin-engine prop turbo. The plane is large and has a radar rotor dome. Many consider the E2C to be one of the most difficult planes to fly and train with, as it has an 80-foot wingspan and is 52,000 pounds of plane.

Flying onto a Carrier
Flying onto a carrier isn’t an easy task and most would consider it a dangerous experience. The space to land is limited and the planes approach the carrier at approximately 90-110 mph. The planes are equipped with tail hooks that are snared by a series of wires on the ship’s deck; literally bringing the plane to a screeching halt. During the landing process, the pilot focuses on the "Meatball," a set of landing lights that establish the correct glide path and speed to "catch a wire" after slamming onto the deck. The final say regarding any landing comes from the Landing Signal Officer whose voice Jan said sounded like words from heaven as the plane approached the flight deck.