Fishing the Iowa Great Lakes should be on any angler’s bucket list! The region’s gorgeous blue waters teem with unprecedented amounts of fish, allowing all skill levels the ability to entice a fish onto their hook. Whether a fisherman throws a cast off their home dock or enjoys a trolling boat through West Lake Okoboji, there are countless opportunities and habitats to search for fish.

“The Iowa Great Lakes are comprised of both deep lakes and shallow vegetative areas of water. When you understand the shape and make-up of each lake, as well as how the climate and temperature effects fish, anglers will find their hiding spots,” said Mike Hawkins, Iowa Department of Natural Resources District Fisheries Biologist.

Water Temperature
Hawkins said during the hot summer months, the maximum depth of West Lake Okoboji’s 136 feet creates a thermocline, and oxygen depletes in the deeper waters. “After mid-June, fish won’t be found deeper than 35 feet,” he explained. “When the lake turns over in the fall, the water layers mix and everything is oxygenated and fish go deeper again.”

Fish can be found in the Iowa Great Lakes all year long, but certain species can be very active during the spring spawning period. The cool water temperatures are appealing to Walleye, Yellow Perch, Smallmouth Bass, and Northern Pike.

“These types of fish don’t like the heat and are most active during the spring, fall, and winter. They have the highest activity and catch rates in cooler water,” Hawkins said. “You can still catch them during the summer, but the locations of where they’re found do change.”

These fish seek out cooler areas underneath aquatic plants, where ground water seeps in, or in deeper water. Hawkins added that Northern Pike and Walleye stop growing when water temperatures are warm and water temps above 80 degrees are lethal to them.

While these fish prefer cooler temps, Largemouth Bass, Crappies, and Bluegill are most active during the summer months.

“Understanding a little about a fish’s biology and some characteristics of the water body often leads you to the fish,” Hawkins said.

Spawning Season
Spawning season takes place in the spring and has a huge effect on fishing. Fish spawn at different places and some are more active prior, during, or after the spawn.

“Bluegills are prolific spawners and create nests, with the male Bluegill defending the space. When a small lure is cast next to the nest, the Bluegills become very aggressive,” Hawkins explained. “Crappies are also very defensive of their territory and have a good bite during the spawn.”

He also said Northern Pike don’t nest and are found in marshy wetlands, while Walleye can be found near rocks and are very active after the spawn, as they feed heavily to make up for the loss of energy.

“Spawning is a very stressful time, and it takes a lot of energy and time,” Hawkins added. “When you learn about the fish’s biology and habits, as well as how temperature and spawning effects them, the information can lead anglers into the right fishing spots.”

Finding the Hiding Spots
The sport of fishing captures all ages and skills. The thrill of reeling in a fish creates smiles for all. Hawkins suggests beginning anglers target panfish like Bluegill and Yellow Bass. These two fish can be caught from shore or off docks and near hoists. Bluegills tend to prefer a vertical habitat and like wooden structures - wood docks simulate a tree in the water.

When water temperatures rise, these species move deeper and use the aquatic plants for food and cover to escape predators. “Fish will start to use the plants, so finding the deep side of the weed line is helpful for catching them during the summer months,” Hawkins shared.

Each lake is different, as plants will grow out to a depth where the light isn’t supported. “The clearer the lake, the deeper the plants will grow,” said Hawkins. “For instance, West Lake’s weed line is 20-25 feet deep and can be found via boat sonar.” 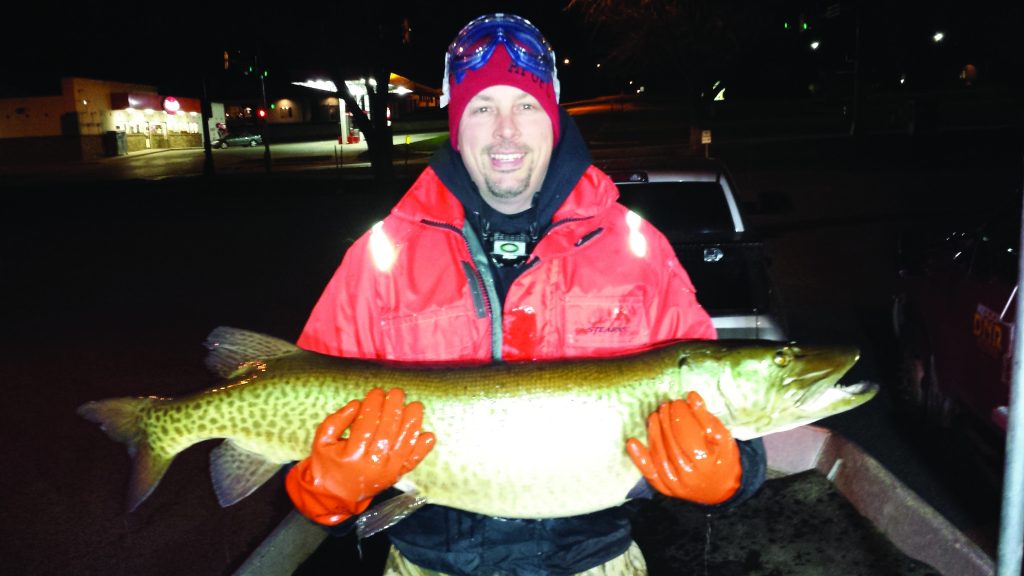 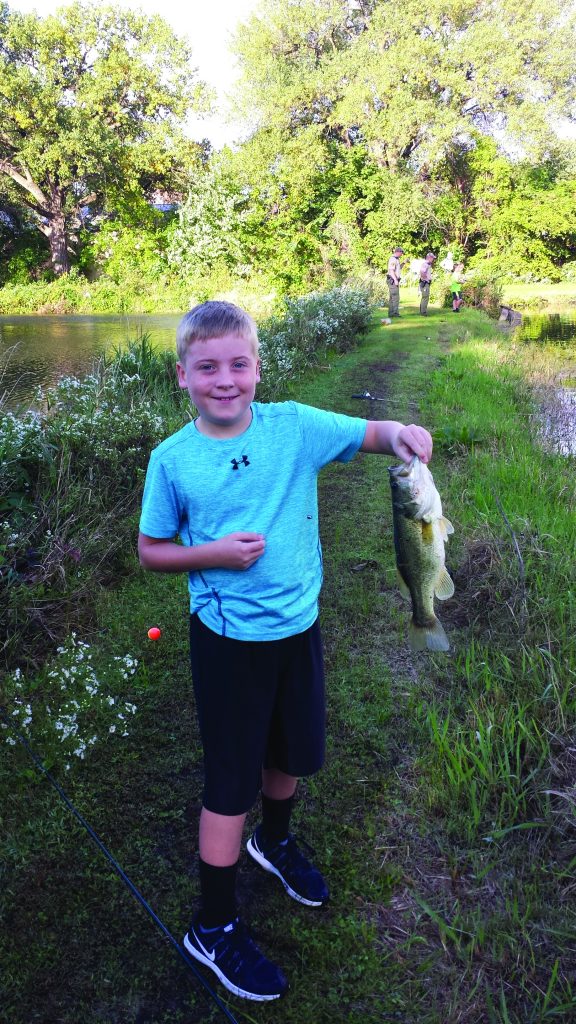 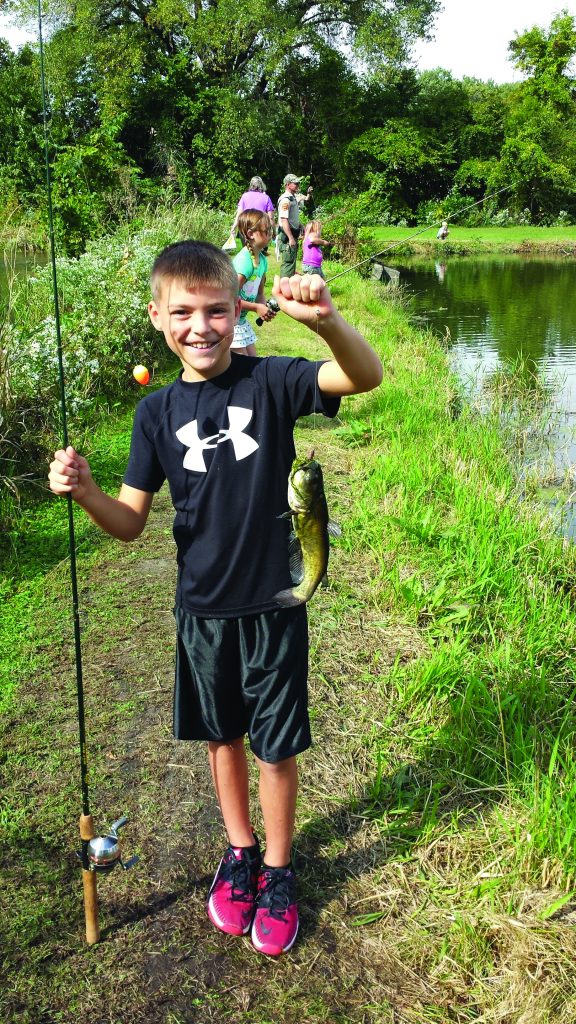 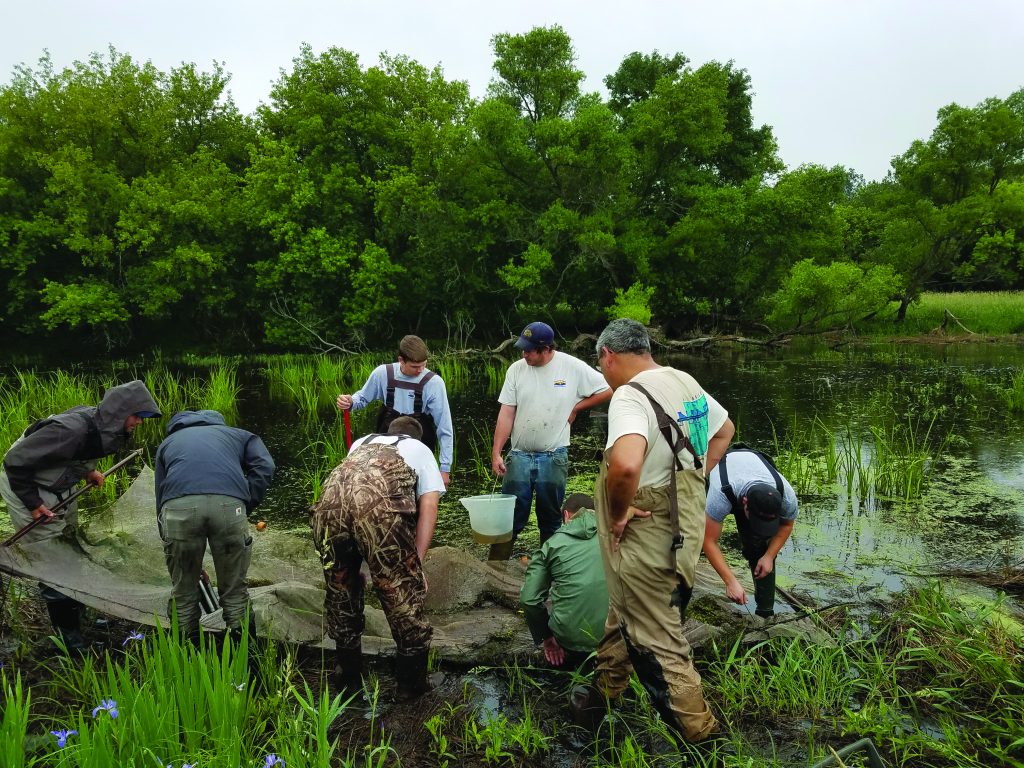 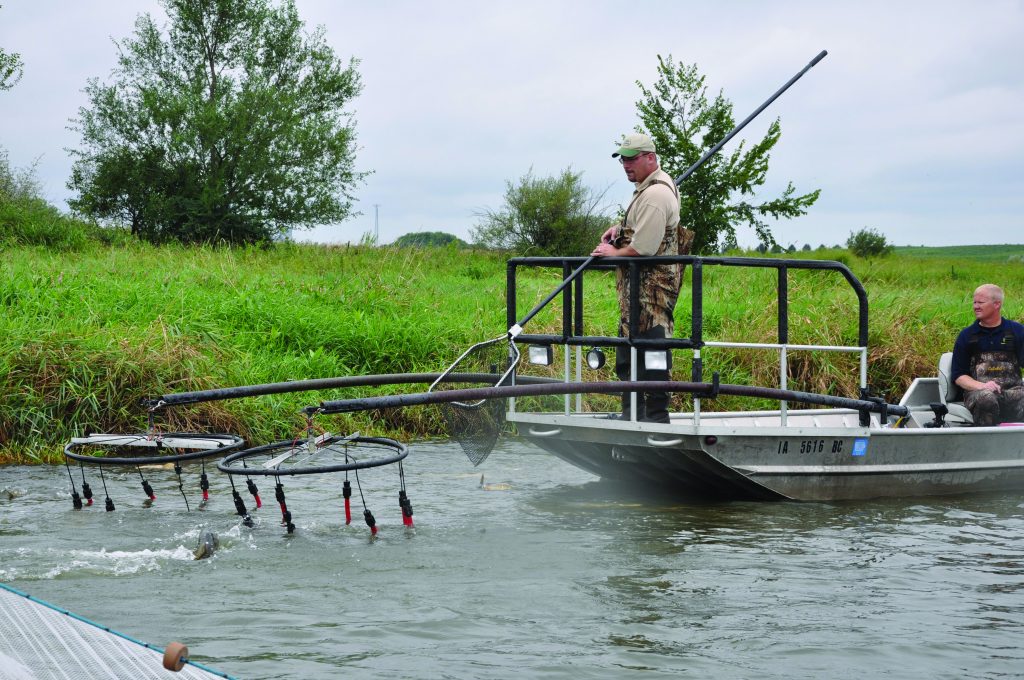 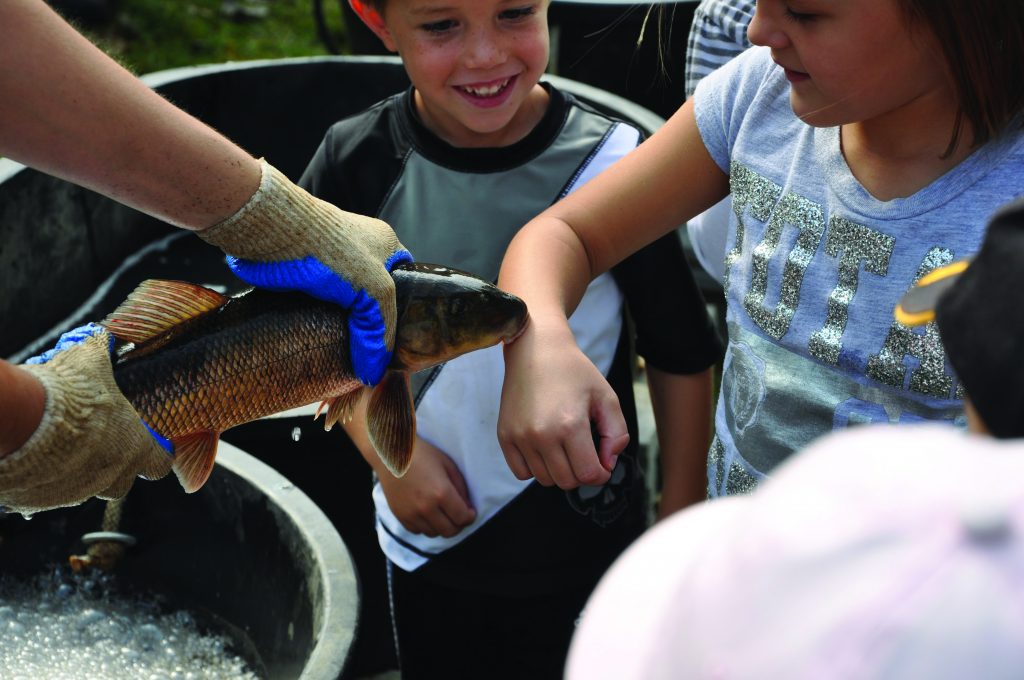 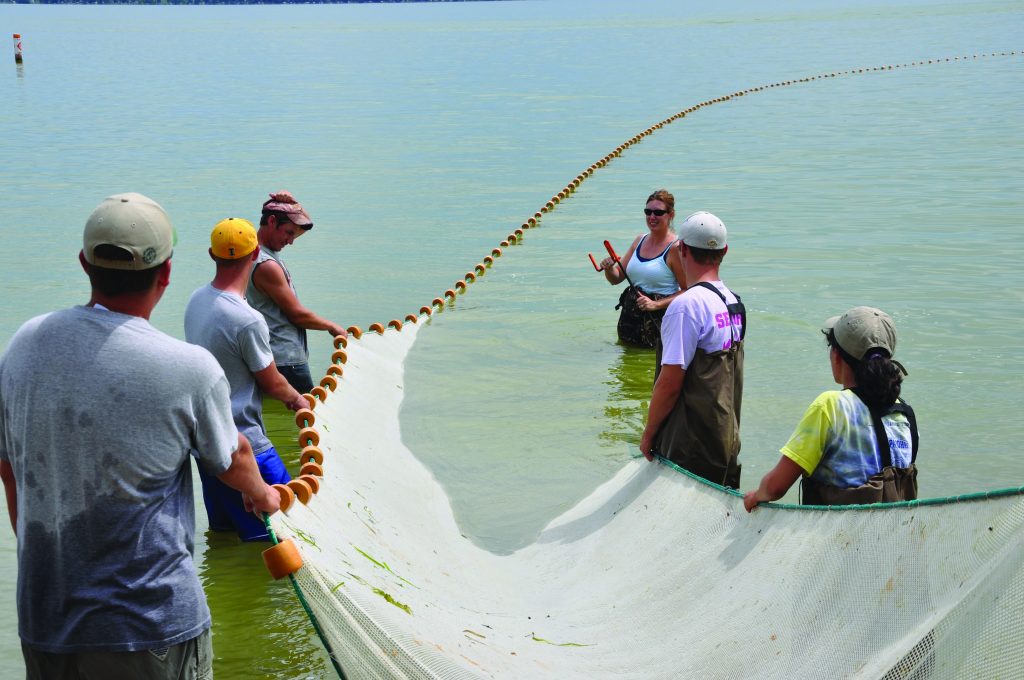 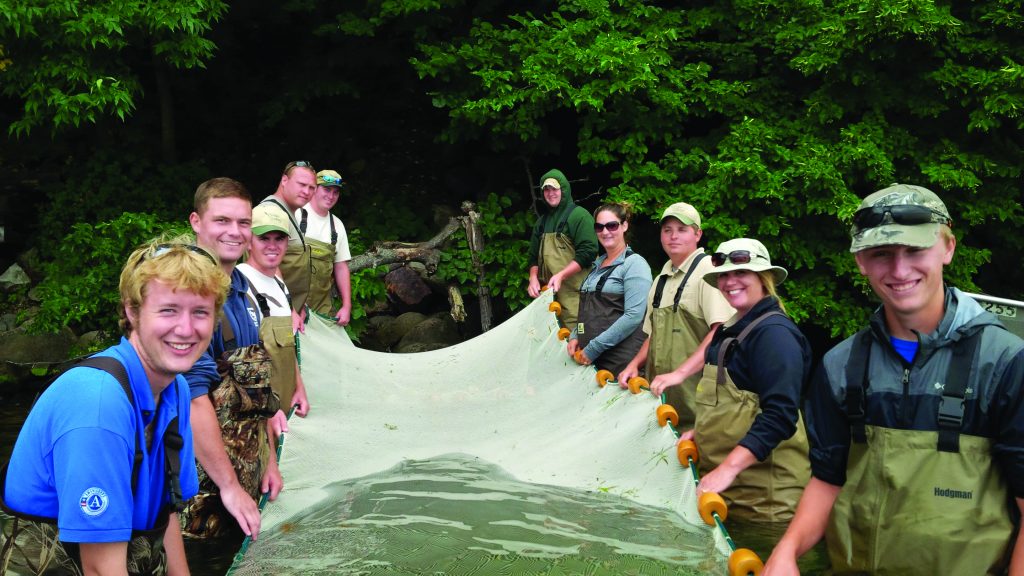 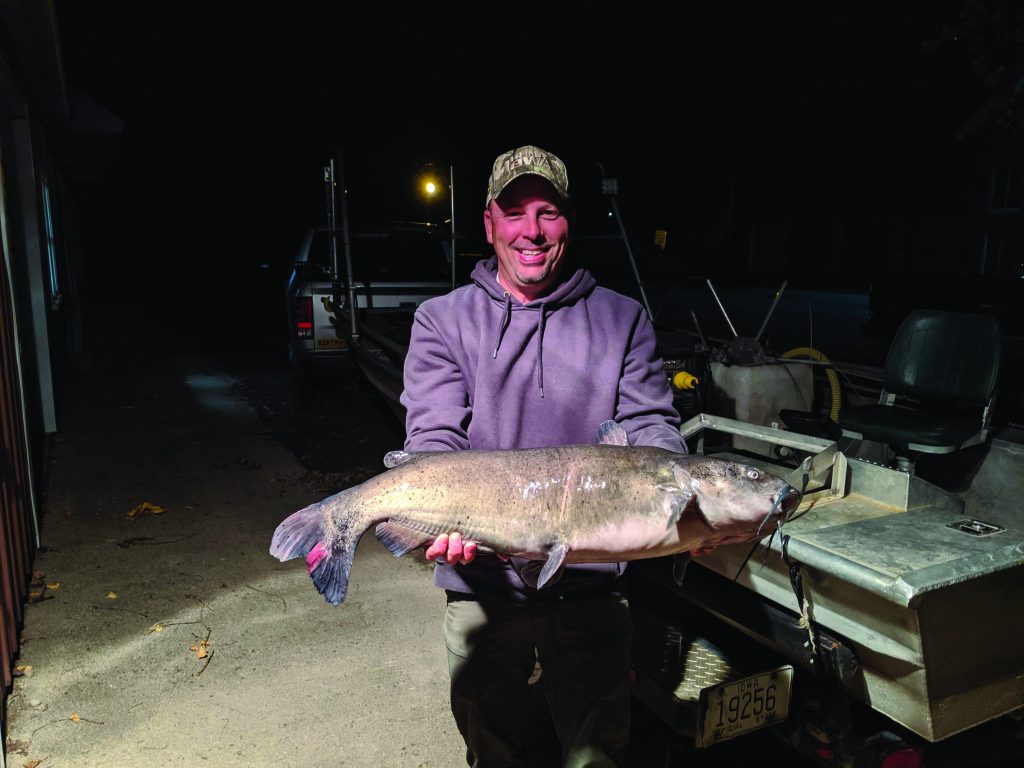 Fish like to hide in the weed line, especially when it’s combined with a rocky area. An advanced angler will search for fish along the edge of plants, rock piles or near an underwater point. “Anytime one habitat meets another, whether its rock, sand, plants or a transition into deeper water, fish find it attractive – these areas have food, cover, and protection for them,” he explained. “Transition areas are a great hiding spot for fish and can be seen via sonar.”

In the Iowa Great Lakes, Hawkins suggests using sonar to find the weed line or where there’s a drop off around points. The most interesting places can be Stony Point on Big Spirit or Gull Point and Pikes Point on West Lake Okoboji. The deeper rock piles are around 20-25 feet and become a good habitat for fish to hide amongst the rocks and plants.

“This draws the fish in during August, when you can have a hard time catching fish in other places,” Hawkins shared.

These areas can be found via habitat maps which can be located on the iowadnr.gov website. Expert anglers can find spots through experience and maps become a starting point. “Our goal is to shorten the time between hook sets,” Hawkins said. “We try to do that by keeping fisheries healthy and providing tools to help guide anglers. Maps are always a great place to start.”

Fish Biology
While fishing, young anglers need to remember the shape and direction of a fish’s mouth. This information gives an idea of what the fish likes to eat and where to place the bait. For example, Largemouth Bass require bigger bait, whether an angler uses a spinner or crank bait. Musky and Northern Pike also take larger size bait.

“You want to use bait that simulates what fish eat in their environment,” Hawkins said.

Bluegill have a tiny mouth and need smaller gear - small bobber, light line, very small hook, small chunk of night crawler or a smaller wiggler or wax worm. Big hooks with a big gob of nightcrawler will create frustration as the bobber moves around a lot but setting the hook in the fish’s small mouth can be nearly impossible.

“Gear selections can play a big role in fishing,” he said. “There are all types of baits, rigs, and intricacies ranging from fly fishing to trolling. When you’re first starting, keep everything very basic and simple. Learn your fundamentals first and  go from there.”

Most of all, Hawkins said to appreciate the outdoors and enjoy the water – disconnect and relax.

“Whether you’re new to fishing or a seasoned bass tournament angler, troubles melt away when you’re out on the water,” Hawkins said. “We’ve seen large numbers of anglers this year, many first timers, those who haven’t fished for years and experts. It’s good to see people connecting with the outdoors.

The Iowa DNR regularly monitors the Iowa Great Lakes, sampling fish throughout the year, watching and maintaining the fish population in the region. Hawkins and his staff also monitor invasive species on a regular basis, working closely with local communities and protective associations.

Ready to find out more?

Drop us a line today for more information