Despite his youth, Teddy Saltzman has always had big dreams and a knack for innovation. The 16-year-old businessman has accomplished far more than others his age, considering he runs his own company and owns a patent. The Bishop Heelan junior has developed the popular “Aqua Spool,” a plastic spool that makes it easier to re-roll foam water mats and is sold at a number of locations in the Iowa Great Lakes.

At age 14, this young proprietor spent hours at his kitchen table and in his garage trying to find a solution for re-rolling the popular water mat, a large rectangular slab of buoyant foam. Many people use this latest in water recreation technology as a floating platform while enjoying the lake or other bodies of water.

The water mats have been known to be extremely difficult to roll back up for storage, and during the process, have potentially created a few family arguments.

“My sisters and I argued all of the time on who was going to do it!” Teddy said. “My dad finally said ‘Teddy figure out a solution.’”

Finding a Solution
With pvc pipe and the pickle bucket lid from Burger King, Teddy began tinkering with a solution and developing his first prototype.

With the encouragement of his mother, Kathleen Saltzman, Teddy created a device that worked similar to a paper towel tube, with endcaps designed to grab ahold of the mat.
During the winter of 2018, Teddy brought an early prototype to a Briar Cliff University’s “Swimming with the Sharks” business idea competition, where his product came in second place. The closest competitor was in their thirties and there were few teenagers in the contest.

Shennen and Teddy would also share the potential solution with companies in Minneapolis.

“While his sisters were at dance competitions in the Cities, Teddy and I would visit with companies but many of them had a hard time understanding what he wanted and didn’t create anything close,” Shennen said, owner of five Burger King restaurants in Sioux City. The companies would send possible production ideas back and none fit Teddy’s plan.

“We were really frustrated at this point,” Shennen shared. “We spend many of our weekends at the cabin in Okoboji, and one day, found ourselves in conversation with Kevin Vaughan, who also has a summer home in the area.”

Owner and President of Fimco Industries in North Sioux City, Vaughan told Teddy to stop by the office and meet with his engineers. They created a space for Teddy at the company and assisted him in the design and manufacturing of the Aqua Spool.

Teddy interned at Fimco during his 2019 summer months and spent hours in quality control searching for the right materials to develop his product.

“Kevin has been a great mentor throughout this entire process,” Shennen said. “Despite Teddy’s youth, Kevin’s belief in his idea was exactly what was needed to produce his dream. Not many business owners would do that for a teenager.”

"When I started, I didn’t know how the ‘Aqua Spool’ would turn out. The creation was just an idea in my head and I never imagined it would become an actual product."
— Teddy 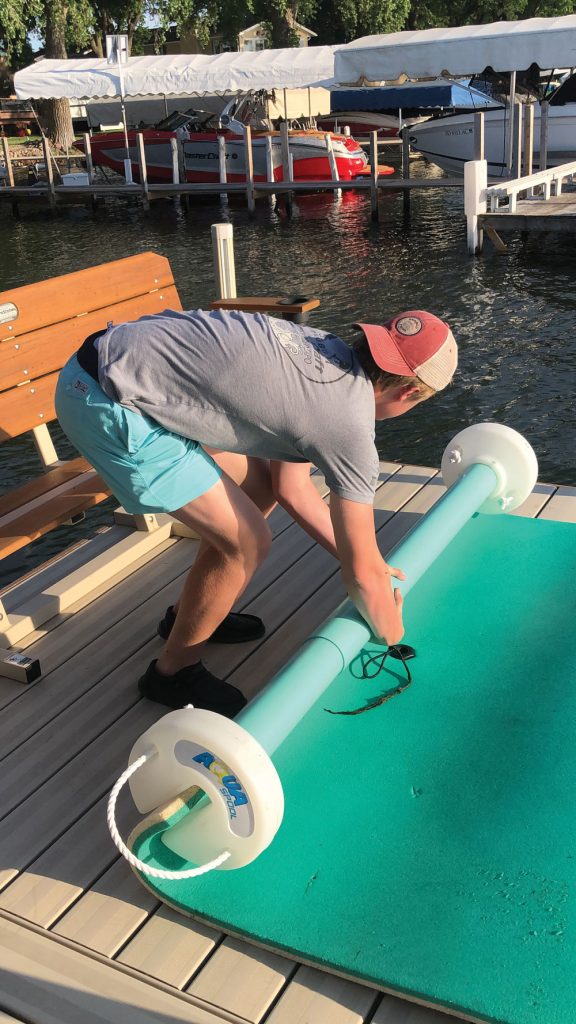 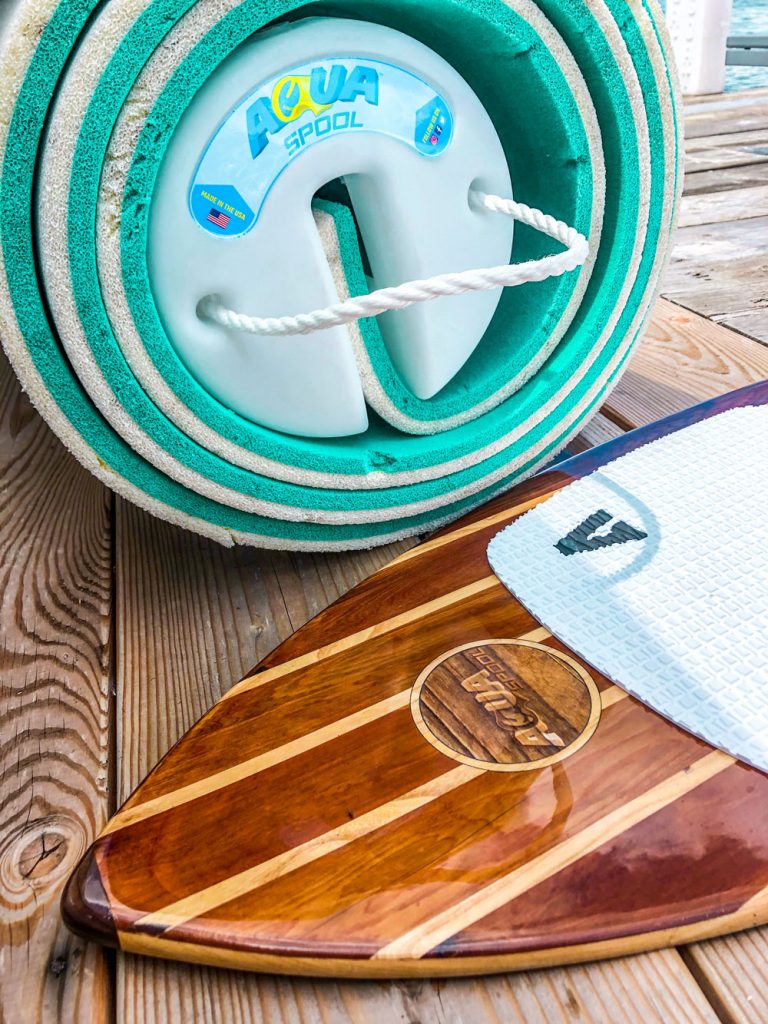 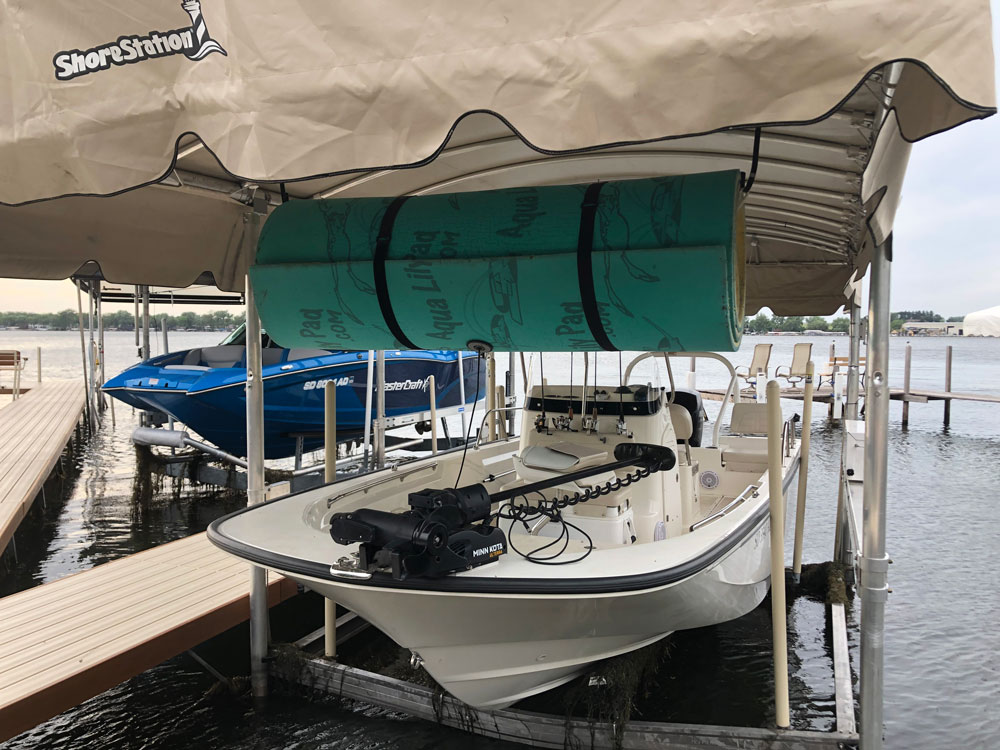 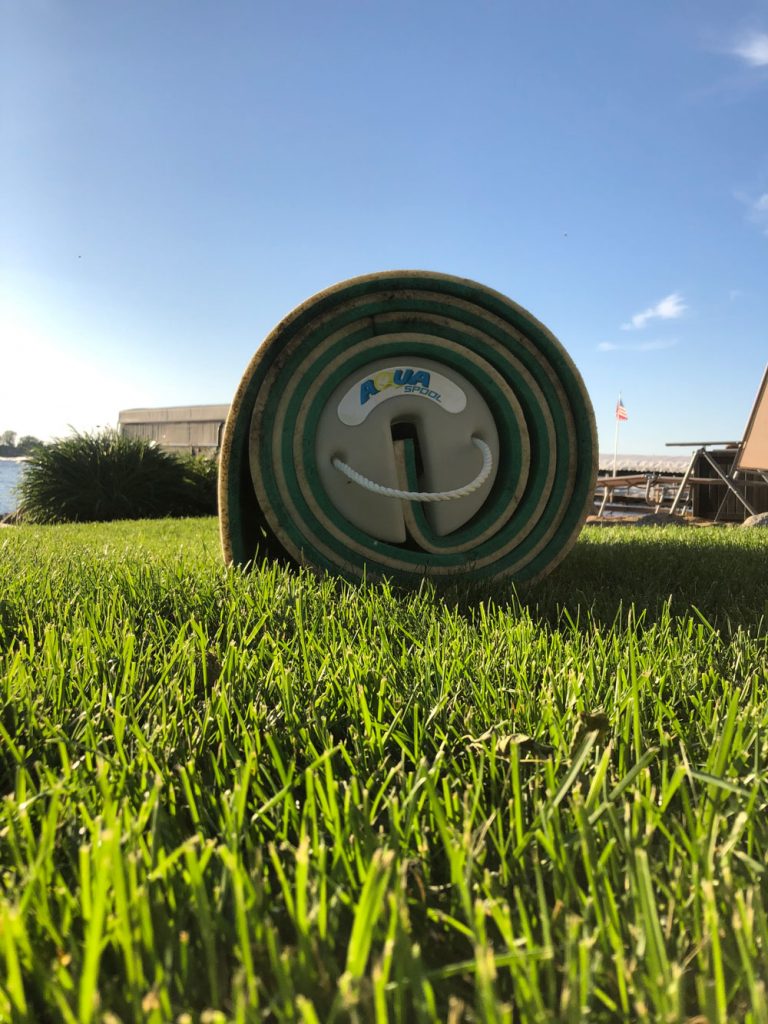 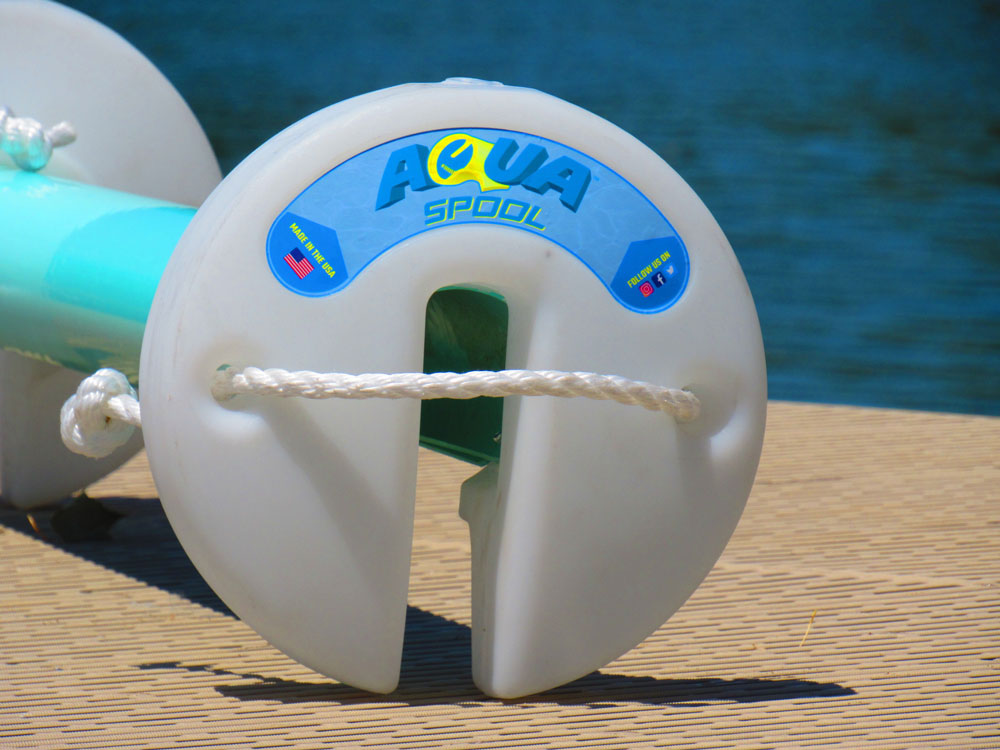 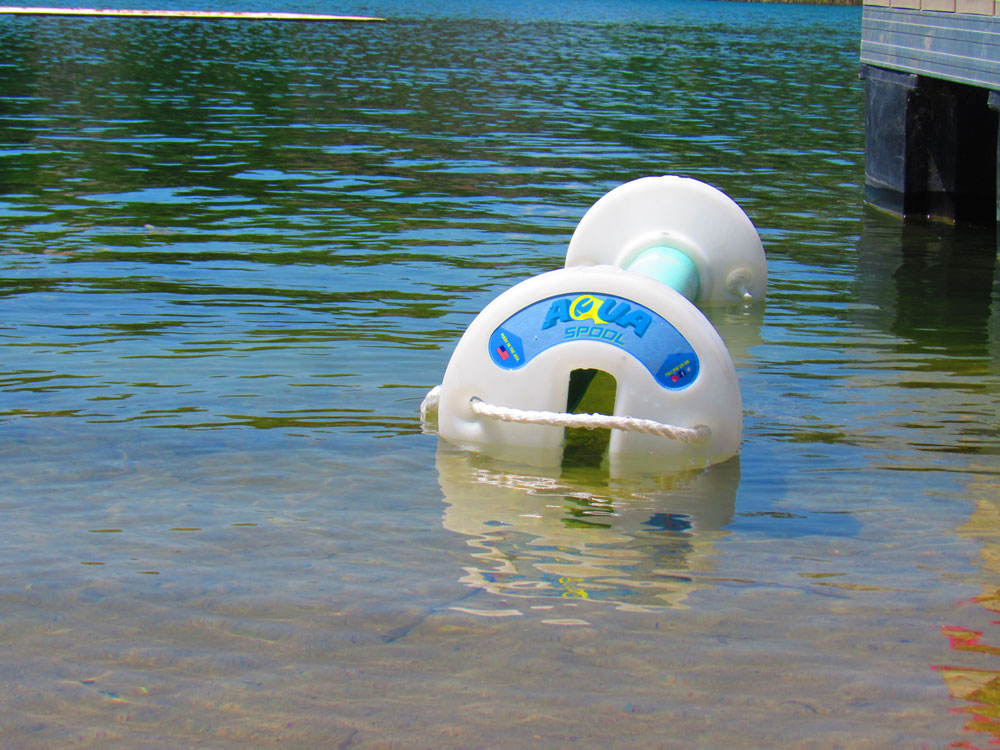 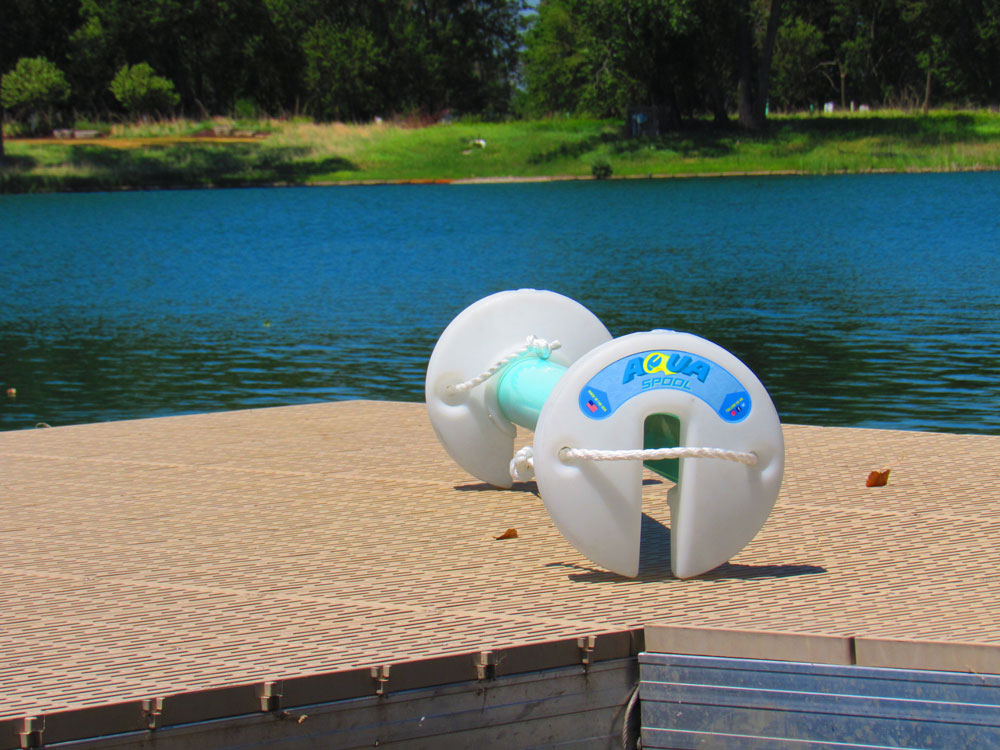 Last summer, about a year after Teddy had developed his first prototypes, Teddy applied for a patent. Competing with similar product designs, Teddy wanted to trademark the product. His mother Kathleen is an attorney and walked her son through the patent process.

Development Process
Teddy has grown up on the water, whether in Dakota Dunes or summers at the Iowa Great Lakes. He knew the Aqua Spool required buoyancy and wanted to limit the parts. “I needed the size and weight of the material to float on the water,” Teddy explained.

Using special pipe from a fabricator in Lincoln, Nebraska, Teddy spends every Thursday at Fimco cutting between 60-62 pieces. He then fits the materials into a mold, sliding the male and female parts together to create the Aqua Spool.

Brainstorming was required to figure out how the spool would grab the mat, but similar to a paper towel tube, he uses the texture of the water mat to grab ahold of the spool on the first roll. Then the users will quickly roll until they can’t reach and continue to pull the spool forward to complete the process.

The entire building process takes approximately four hours and Teddy is able to make 50 spools at a time. Fimco reserves space in their warehouse for merchandise and the Saltzman’s have created a mobile office with an enclosed trailer. At this point, Aqua Spool has no website, partly because the high school junior is limited in time and only has the capacity to currently make 70 spools a week.

“We don’t have the production capability at this point yet,” Shennen said. “Teddy has plans to create a new mold that will allow him to increase the amount of spools at one time.”
Cheaper than similar products on the market, the Aqua Spool also includes a set of hooks that allow you to store your mat inside your hoist, eliminating the need to carry the mat up and down the dock every weekend.

Selling the Aqua Spool
At the beginning of the summer, Teddy had final product and was ready to share with the public. He had his first demo weekend at the end of June at BOJI SURF CO. in Okoboji and has placed merchandise at Bomgaars in Spirit Lake, Mau Marina, Oak Hill Marina, and Parks Marina in the Lakes area, as well as Kopetsky’s Ace Hardware located in Yankton, South Dakota. Teddy has also been demoing the spool at the Arnold’s Park Farmer’s Market on Saturday mornings throughout the summer.

“After the first demo, a number of people reached out on social media, asking us where they could purchase one,” Shennen said.

Teddy has dreams to increase his production and take the Aqua Spool to other places in the United States. He has plans to go into business after college, but is enjoying his current learning environment.

“I’ve been learning so much by working with suppliers and fabrication to learning bookkeeping and marketing,” he shared. “Most of all, I loved making a product that solved a big problem for many people.”

Just another reminder for any child who loves to tinker and build – you never know, they could be the next Teddy Saltzman.

Teddy Saltzman can be contacted via the Aqua Spool Facebook page.