If only the relics and artifacts lining the walls and shelves in Darrell Frerichs’ basement could talk. The history displayed throughout the room is priceless, showcasing everything from petrified turtles unearthed in the Badlands to prehistoric shark’s teeth found along the shores of Silver Lake. The walls are covered with thousands of labeled arrowheads, fossil bones, and Civil War antiquities, each telling a special story from days past.

Darrell’s basement collection attracts attention from organizations like the Smithsonian Institute and archeologists have been known to contact the 80-year-old Lake Park resident. Throughout the years, he has become an expert on the region’s history and loves to describe how each piece is found and the narrative of its past.

“The stories each piece tells about a culture and a time period is what initially drew me into searching and collecting items,” Darrell shared. “It all started when my Grandma Ethel gave me my first arrowhead and was furthered when my neighbor showed me the arrowheads he found.”

Discovering a Passion
When Darrell was 12-years-old, a neighbor found three arrowheads in a nearby field after a heavy rain, peaking the young boy's interest. The next day, he went searching for his own treasures and discovered his first arrowhead a mile south of Stony Lake in Dickinson County.
The thrill of the search quickly became a passion for Darrell, as he explored the area around Lake Park and surrounding communities. He would drive the tractor through the fields and began to learn how to spot an area of interest – places near water sources, dry river beds or lakes, or freshly plowed fields. Many of these areas were former Native American campsites in the region and the dirt would gradually unearth their hidden stories.

“I became really serious about artifact hunting in my twenties, and the passion only grew as I got older,” Darrell said.

Through the years, Darrell has spent hours searching for arrowheads, ax heads, rare Lake Superior agates, minerals, fossils, and much more. While he doesn’t have a college degree, the Lake Park native has gained three different archeology certifications and has a carefully cataloged collection. The cases found in his basement showcase cultures once native to the Iowa Great Lakes area, surrounding states, and even the United States. There are artifacts from the Clovis and Folsom cultures, one of the first groups believed to be in the United States, to a musket bullet used at Valley Forge during the Revolutionary War.

Ash Island, northwest of Lake Park, has unearthed numerous items, as it is a place where Native Americans would send animals through the water and onto the island. Stony Lake was close to where Darrell lived as a child and countless treasures have been found amongst the dirt. He also found fossils at Horseshoe Bend.

A friend gave him a Sioux Medicine Bag that was once traded for a bowl of sugar in the 1800s, and Darrell has an 1863 Civil War Family Flag in his possession, which will eventually be passed onto his firstborn son. 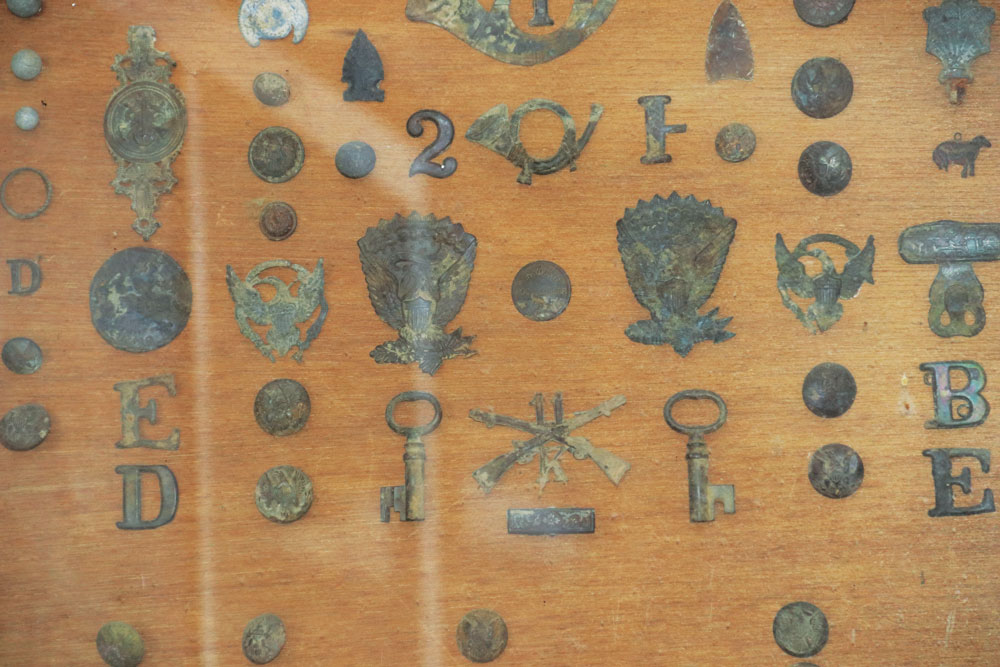 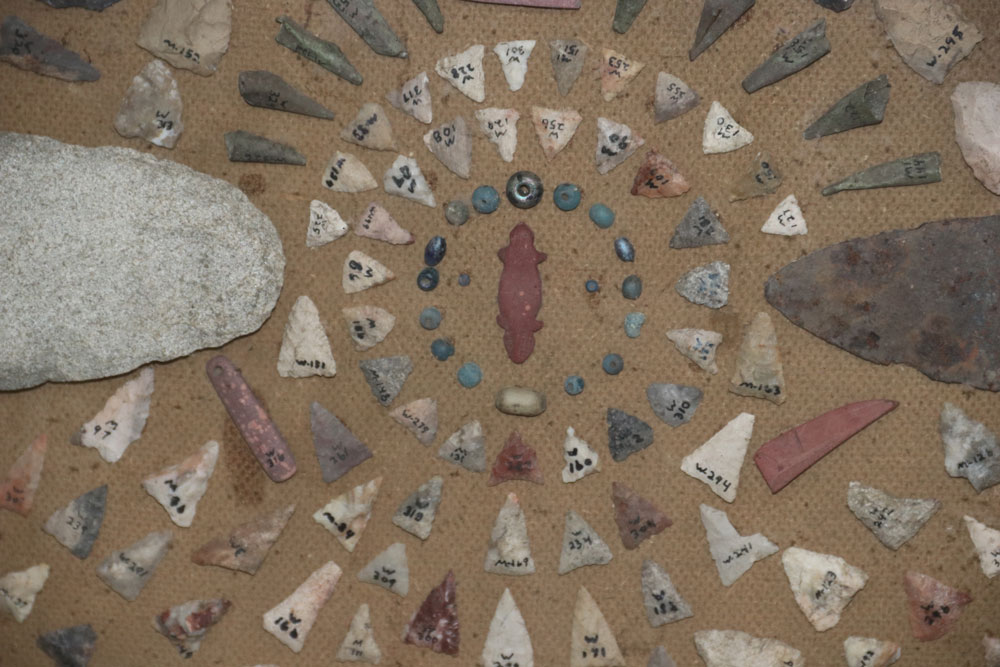 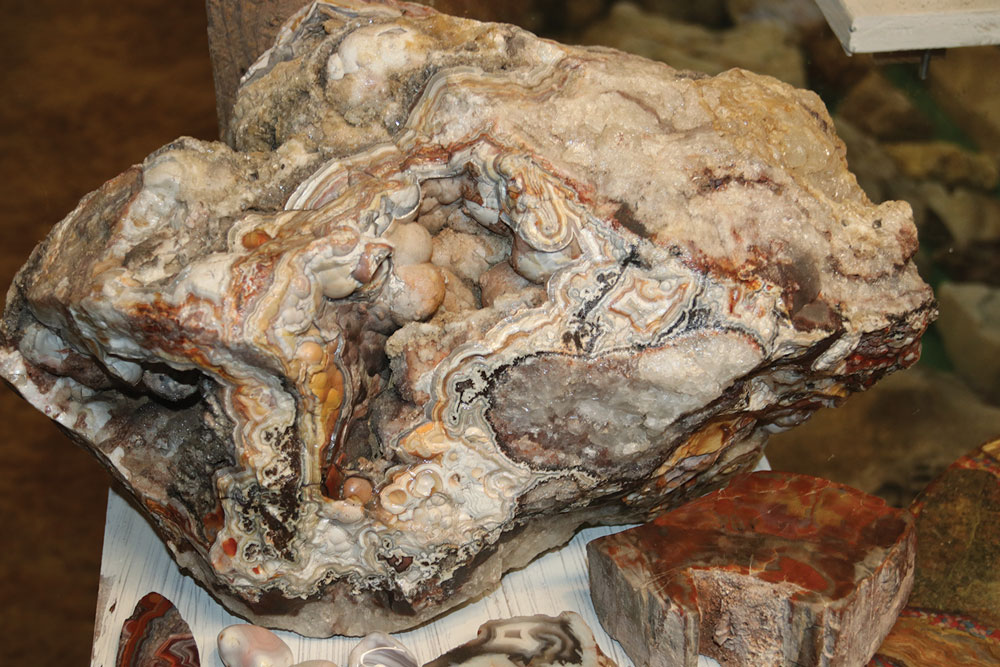 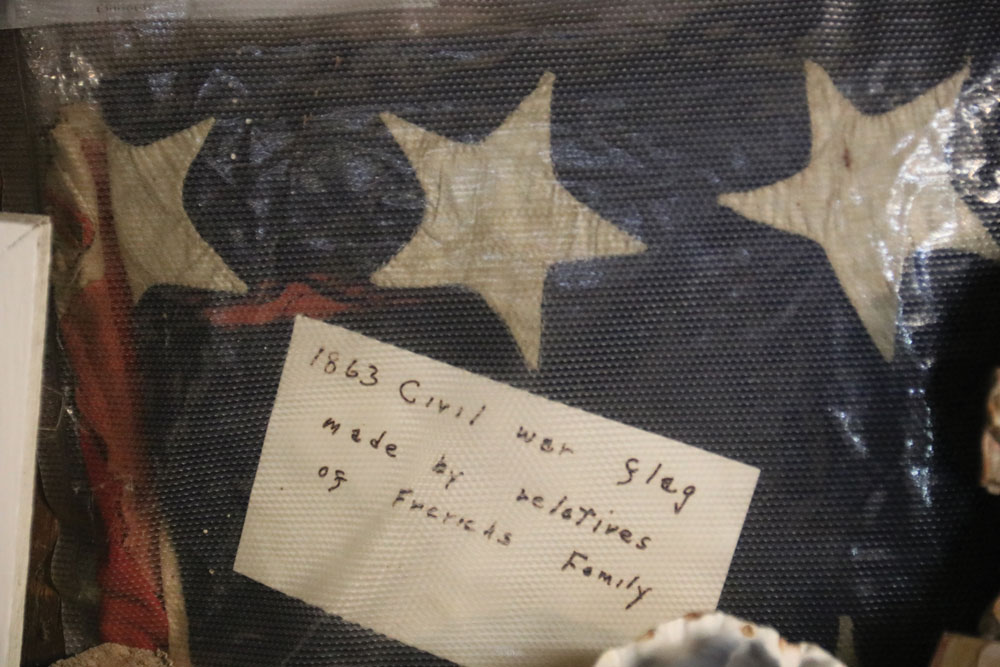 He has one case that showcases different types of arrowheads created by the many Native American tribes. However, Darrell has one particular arrowhead he considers priceless.

“Every year, I spent every imaginable moment hunting for arrowheads. My dad knew where I was but often didn’t go with me. One of the few times he did, he was searching from his tractor in a grassy area by Stony Lake. All of a sudden he calls out, ‘I found one’ on top of a gopher mound,” Darrell said. “I think it was one of two my Dad found his whole life and a one in a million lifetime discovery. This one gets buried with me!”

There are countless ancient fossil bones safe within the cases; including an ancient elephant tusk Darrell found a mile east of the Sioux Valley Log Cabin, as well as one of the largest Bison bones and the remains of a Giant Sloth.

Everything Darrell discovers is labeled and researched before being placed in a case. Archeologists will often visit, as the collection is considered one of the most prestigious within the state.

“Every single piece can be looked up and is labeled with a number, campsite, year, and shares any details,” he added. “When I find an arrowhead or other items native to a culture, I’ve found each one is different and unique. The type of arrowhead often describes the culture and the tribe, as well as how old it is.”

Favorite Places to Search
Besides spending considerable time searching places around the Iowa Great Lakes area, Darrell has enjoyed hunting trips around the Missouri River and Fort Sully in South Dakota. He has black buttons from sharpshooters and other personal items from soldiers during the Civil War, as well as bullets from Custer’s Battlefield.

One of Darrell’s favorite items is a small red stone he found near Blood Run along the Missouri River.

“The uniquely engraved stone was barely sticking out of the dirt. I picked it up and started wiping off the sides and was so excited I dropped it,” he said. “It’s one of my rarest finds.”
A little smaller than a peach pit, the ceremonial buffalo pipe has been in the Smithsonian and has used on a poster by the state of Nebraska. The pipe, like several of his other finds, was crafted from a piece of catlinite, often called pipestone. Darrell estimates the pipestone badger pendant is around 1,100 years old and is considered one of about five found in the entire country.

Another rare find is a never heard of 15-cent trade token discovered at Fort Sully.
“A friend and I were searching around the fort and I randomly unearthed this small coin. Another man came by and was offering me a $20 gold piece as a trade, which got my interest,” Darrell said. “It also had RM Young Post Trader inscribed on the coin.”
He sent the information to the Smithsonian who, said the coin was authentic but they never knew actually existed. Previously, they believed there were only 5 or 10 cent pieces.

Whether it’s the wedding rings from soldiers in the Civil War or pendants created from Lake Superior agates, each and every one was precious to someone at one time. This is why Darrell loves to share the stories of the thousands of uniquely designed arrowheads and stone hatchets for those who want to listen.

He said the next generation of area historians will have a harder time finding hidden treasures in the area.

“Those of us older hunters found most of them,” he said with a smile. “However, you never know. I found a new arrowhead in my garden this summer!” 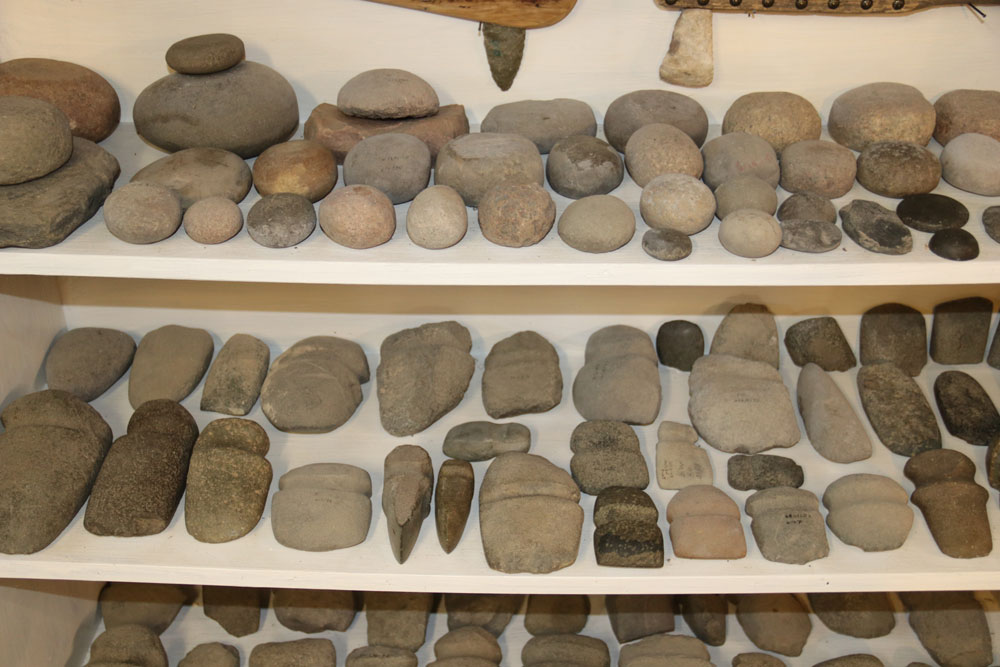 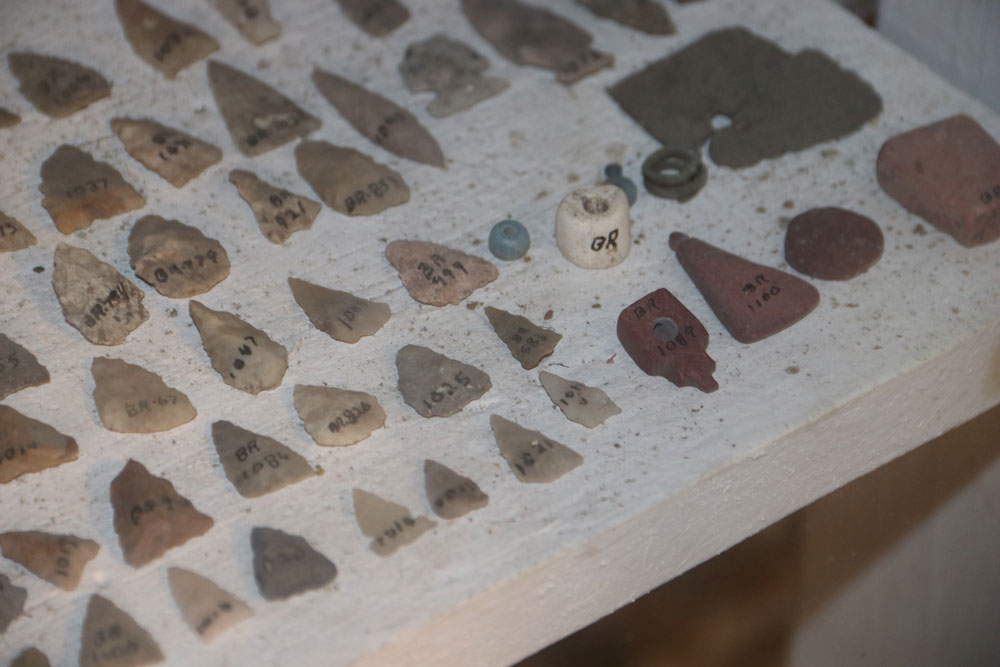 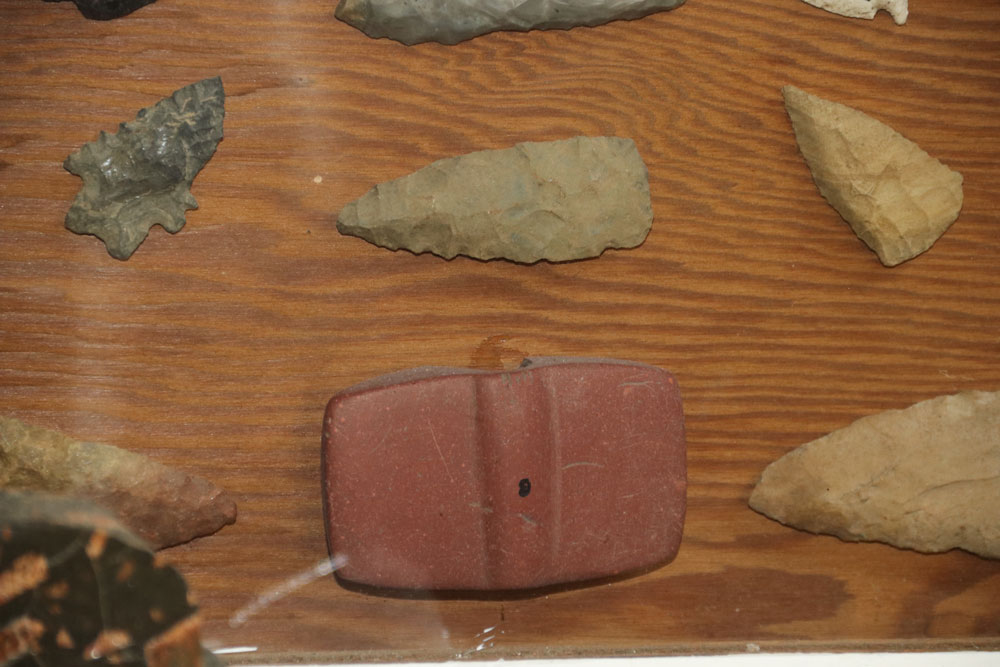 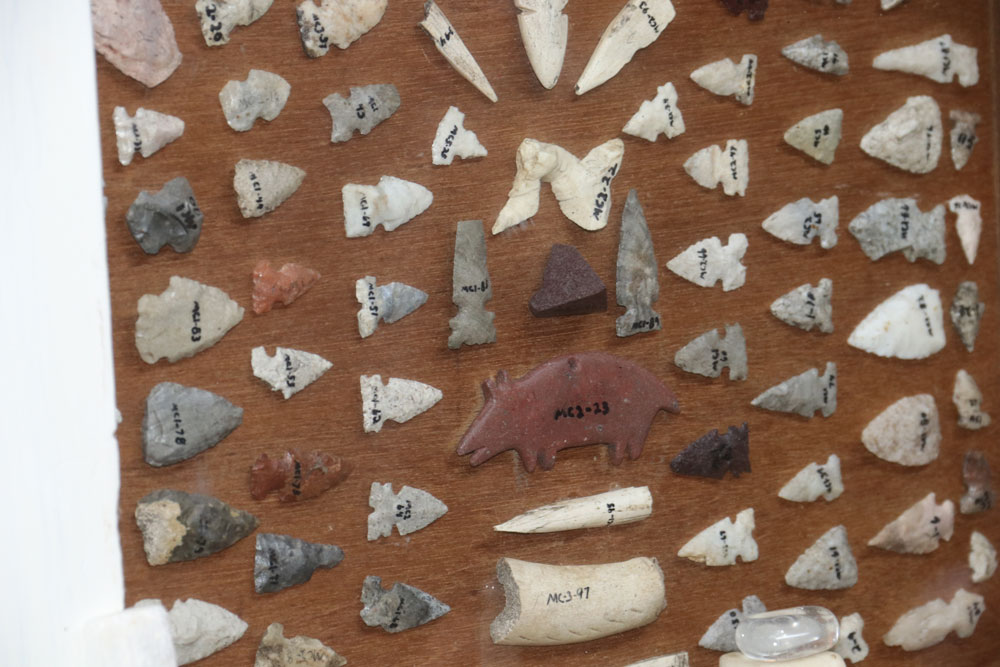