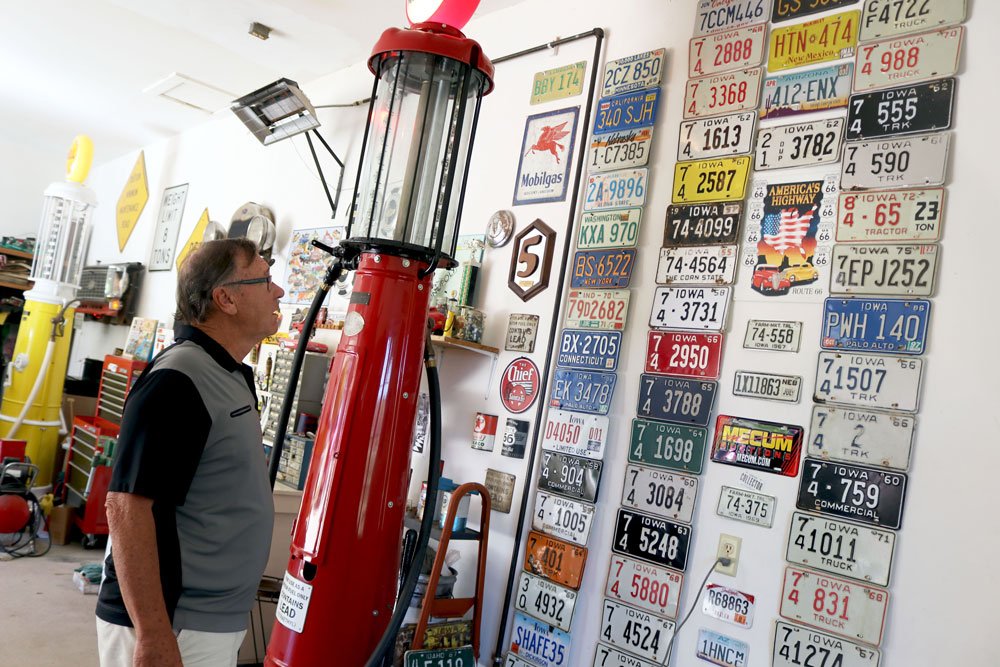 Through the years, many of us have played the license plate game to pass time down the road. We would call out different letters, hoping to be the first one to make it to the letter Z. These unique plates share not just letters and numbers but also showcase where the vehicle is from and become a snapshot in history.

Spirit Lake resident Larry Shaffer has captured some of these moments in time, aligning the walls of his garage with over 100 license plates from around the United States. Some of the rectangular metal plates date back to the early 1950’s; a collection that began with his father-in-law Lloyd Lund.

“I really like the variety of plates and how they are all so different; my display is one way to capture the nostalgia behind the plates,” Shaffer said.

Many of his collected Iowa plates were found gathering dust in several cardboard boxes in a machine shed near Cylinder, IA. In addition to the Iowa license plates, there were plates from other states that were given to Lloyd by his daughter, whose family traveled the United States via the Navy. When it was time to sell the family farm, Larry and Lois inherited over 100 old license plates dating from the early 1950s to the 1990s.

Each state’s plate design is different and has changed over the years. In the fifties, "The Corn State" was the first slogan to appear on the bottom of the plate. Throughout the history of Iowa license plates, a metal engraved number was also located vertically on the left side, with each county assigned a different number. For instance, Clay County was 21, Dickinson was 30, Sioux was 84, and Palo Alto was 74. Shaffer said in the late 1970’s, Iowa switched to spelling out the county’s name and eliminated the numbers.

“Decades ago, each year brought a new issue of license plates that you needed to put on your car or pickup,” Shaffer explained. “Now, the plates are changed less frequently as the state of Iowa issues a sticker each year to be put on the vehicle owner’s current plate.”

Interest in the nostalgia of old license plates was revived in 2019, when the State of Iowa issued retro looking white lettering over black license plates. Demand far exceeded the supply, when the "blackout " plates were issued, and the specialty plate became the most popular request in existence. The last time Iowa issued the white lettering over black plate was in 1963.

After Larry retired, he decided to display his license plate collection in his garage "man cave." The plates cover a large portion of the north garage wall, fitting right in with other collected pieces of automobile memorabilia.

Two large 11-foot red gas pumps stand near the license plates. Shaffer found the 1920’s pumps in Gilmore City and had them painted and restored. A hundred years ago, these pumps filled Motel A vehicles. The gas tank lay below the ground, and when the handle was pumped, the gas flowed into a glass cylinder where the customer could see the quality of the gas. A valve released the gas and it flowed into the car via gravity.

“There were no electrical pumps at that time. It was all done by hand,” he added.

Shaffer also displays a 1935 modified Ford Street Rod and a 1978 Chevy Silverado in his garage. For the past 25 years, Bob Travis and Shaffer have bought, restored, and sold classic vehicles. The good friends have taken the restorations to car shows through the years and several trophies and medals adorn the shelves.

“Bob helped me restore a lot of vehicles; he is the mechanic during the process!” Shaffer said.

At the front of the garage, there are other memorabilia Shaffer has collected. He has found old road signs, tools, and oil cans. He turned a Ford Motel A Grill into a garage wall piece, placing lights inside and restoring the parts.

“I really enjoy the hunt and finding things that may be one man’s junk and become my treasure,” he said.

Whether it’s license plates or automobile treasures, Shaffer enjoys saving pieces from the past.

“When we travel, I like to look for license plates from states I don’t have or another car piece I haven’t found yet,” he said. “It’s fun to add to the collection.”