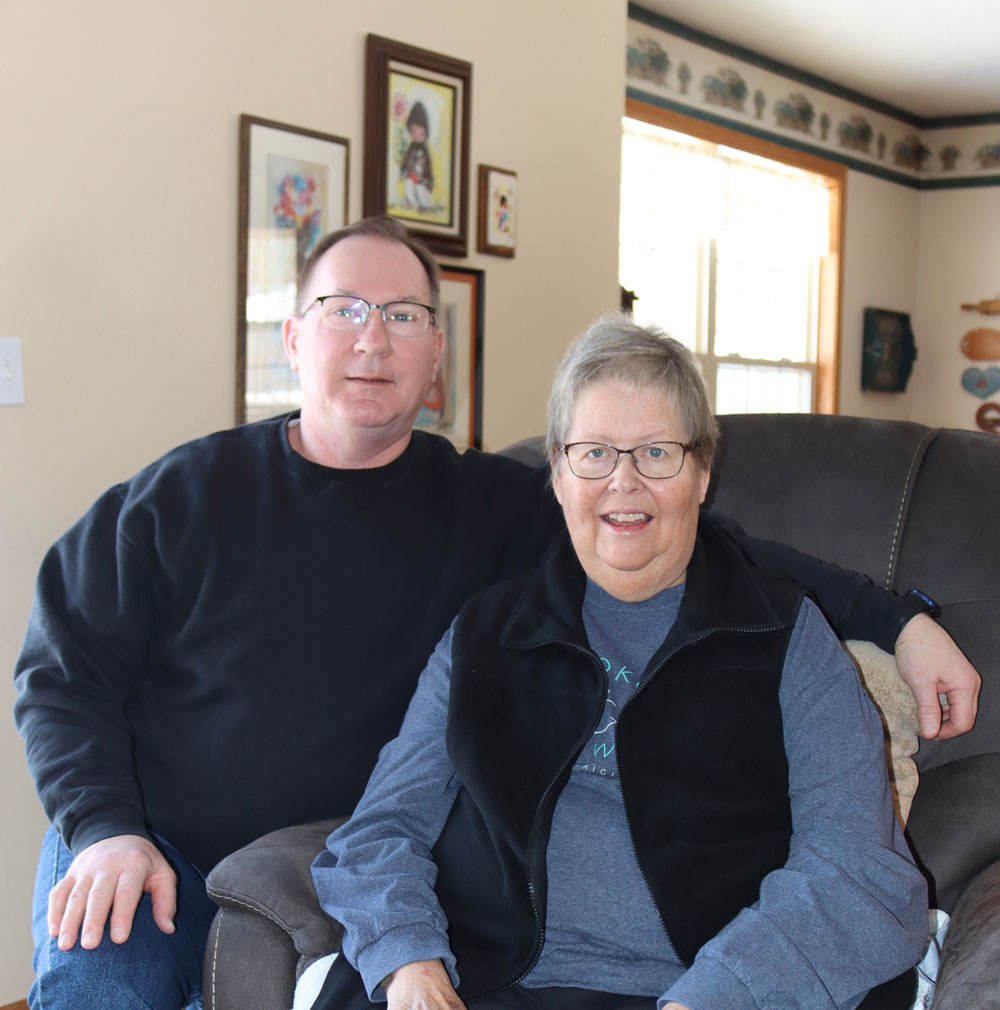 Scott and Elaine Greer Understand True Sacrifice
“For better, for worse, … in sickness and in health, ...” Many times, these words are simple abstractions, something said between lovers on their special day. In this moment, the thought of future turmoil often seems impossible and happiness is largely hovering over the horizon.

But in 2018, Scott and Elaine Greer marital commitment became real, as Scott gave his wife one of his kidneys to save her life.

Providing Lifesaving Help
Former Spirit Lake High School guidance counselor, Elaine has struggled with Type 2 Diabetes for years. Unfortunately, the disease started to negatively affect her overall kidney function and made daily living a battle. At an appointment in fall 2017 in Sioux Falls, her primary Nephrologist Dr. Santella of Avera McKennan recommended that the couple start seriously looking for a live kidney donor. She was also placed on a donor list, but the timetable can be lengthy depending on availability and your location.

Initially, Elaine’s sister Carolyn said she would consider being a live donor, and started the transplant testing process.

“We were really excited thinking that we were a match,” Elaine shared. “The vein and artery matched up, and the medical team was so excited and thought it would work. But my third doctor, who has the final say, Dr. Sakpal, felt the anatomy wasn’t quite right. The vein and artery were slightly twisted, so we were super sad.”

Elaine’s lifelong friend Wendy Wilson then decided to go through with the lengthy process, and excitement pursued when the friends discovered they were a match. Unfortunately, Wendy also had a slight complication, making her kidney not transplant acceptable.

Feeling the urgency, Scott and Elaine decided to take a trip to Iowa City to get a second opinion.

“I was beginning to feel desperate. If I didn’t get a transplant soon, I would have to go on dialysis,” Elaine said.

Scott added, “We were down in Iowa City for several days, and in the process, we decided to stay with Avera as it had been our home base and we knew these doctors.”

As a Critical Care Paramedic at Lakes Regional Healthcare the past 31 years, Scott has seen and experienced a lot. “We’ve picked up patients from dialysis. They are there four to six hours every other day,” he said. “I knew I didn’t want that for Elaine, so I decided to see if I was a match.”

Testing Process
The process to become a transplant donor is extensive, and there is an option for the donor to opt out up until surgery. The phone interview takes over 45 minutes, and if a person is still willing, there is a long online questionnaire to complete.

“The questions get deep down and personal. Sometimes it is the same question just worded differently,” Scott explained. “Once both of these tests have been reviewed, then the hospital calls you back.”

The next step is going to Sioux Falls and meeting individually with a team of doctors and hospital staff, including the surgeon Dr. Auvenshine, social worker, financial consultant, head of transplant nurse, pharmacy staff, and Dr’s. Sakpal and Santella.

“They ask all of the same questions individually and then compare the answers,” Scott said.

Lab is also taken, where 20 vials of blood are gathered. Then Scott underwent a CT scan and X-Rays. Seven to ten days later, the donor receives a phone call and a letter letting he or she know whether they are a match.

“I was calling Scott that day, ‘Have you heard anything yet!’” Elaine said. “We were elated when we found out he was a match and was approved! We were definitely testing ‘for better or worse!’”

Surgery Day
On November 7, 2018, both Elaine’s sister Carolyn and their son Jeffrey were at the hospital for the surgeries. Scott went into surgery first and they harvested one of his kidneys. In a nearby operating suite, they prepared Elaine for her extensive surgery. They wash down the anatomy of the kidney before they make the first cut, and then Elaine was under for the next eight hours.

“All in all, the transplant went really well,” Scott said. “They usually say it’s harder on the donor than the recipient. They had Elaine walking around right away, but I struggled at first.”

Scott went back home with his son Jeffrey on Sunday, and his brother-in-law Mike came on Monday to help out, while Elaine spent the next 10 days at Avera recovering and overcoming complications.

One of the issues was Elaine’s new kidney didn’t wake up right away. Elaine told the hospital staff not to worry because that’s normal for Scott.

“It was a running joke that Scott is kind of slow at the start! Back when we were first dating, Jerry and Paula Hentges set us up on a blind date. We had a great time, but Scott didn’t call me back for three weeks,” Elaine laughed.

On November 19, Elaine was transferred to Prairie Avera Rehabilitation Center, where she began the process of gaining strength.

“Anyone who needs help in this way, it’s a wonderful place. I can’t say enough about the staff at Avera, whether it was the therapists, doctors, nurses, and surgeons,” she added.

Over the next months Elaine experienced several other complications during the recovery process, requiring several more hospital stays but the couple is thankful her body accepted the kidney.  She must undergo annual check-ups and testing, but she’s thankful for her medical team and the bond she’s developed with each of them.

While recovering, she saw a lot of other patients, especially on Avera Third East. The transplant wing is shared with those undergoing cancer treatments. “I said to myself, you can’t be feeling bad for yourself, because there’s so many people much worse,” Elaine shared.

During this time, the couple was greatly blessed with the overwhelming support of the Iowa Great Lakes region, whether it was through meals, gift cards, or reminders of love.

“The community rallied around us and we are so thankful,” Scott said. “We want to do the same in return to anyone we know struggling with a medical issue.”

Becoming a Donor
There are different ways to become a donor, whether it’s making the decision while renewing your driver’s license or when a family member needs an organ donation to survive. There are all types of people on organ donation lists, waiting for the right match, in order to continue to live their lives.

The best option for someone awaiting an organ donation is a living donor, as medical teams can gather accurate medical history and data through tests. The immediate deceased on a ventilator is another option, where healthy organs can be harvested for someone awaiting help. The third alternative is often considered risky, as organ donation can come from someone in prison or has unknown medical history.

“I’m very fortunate I had a family member who was a match as a live donor, as we know people still waiting on a donor list sometimes for the second time,” Elaine shared.

Don’t Ever Give Up!
Since her transplant in 2018, Elaine has medication she will have to take every day for her entire life. Her body now has three kidneys, of which the donor kidney is the only one that functions—thanks to her husband’s gift. She will always be in State 3 Kidney Disease with 60% kidney function.

“I’m so thankful Scott was a match because I don’t know what I had done if he wasn’t. I had to endure dialysis three times and feel for those who have too regularly. But please, don’t ever give up because you don’t know when a donor will become available,” Elaine said. “I also put a plea out there to everyone, please be willing to make that sacrifice and help save someone’s life. Don’t be afraid to be tested and make sure to make the mark on your license.”

Unfortunately, last April 2020, Elaine experienced a complication when she broke her left hip walking into physical therapy. Scott was working, so got the page about a female who fell outside PT.

“I turned to my partner Dustin Hicks and said, ‘I’m sure that’s Elaine,’” he remembered. “Sure enough, we got there, and I said you broke your left hip. I was a part of her ambulance transfer team to Sioux Falls, which allowed me to go with her into the hospital. However, with COVID policies in play at the time, I couldn’t stay long.”

Five days later, Scott returned and brought her back to Accura Healthcare in Spirit Lake for rehabilitation. Several weeks later, Elaine was feeling better and felt like moving a bit.

“It was 6 a.m. and the nurse’s aid said ‘Please do not get up without me,’” she added. “She left the room and I thought, ‘I’m feeling good, I’m going to tidy up the bed.’ I unfortunately fell again.”

At 7 a.m., Scott got a call from Accura with the news of Elaine’s right hip break. “I got to come back in the ambulance and transport Elaine back to Sioux Falls, because with her transplant history, she has to go to Sioux Falls,” he explained. “We teased how I need to stop picking you up for dates in the ambulance!”

Through all of this, their relationship has continued to grow stronger and the two are so thankful for the additional time they have together. Elaine continues to gain strength and they are looking forward to warmer temperatures, traveling and vacationing in their new RV.

“I remind Elaine as well as other patients I encounter, ‘Slow and steady runs the race, you will get there.’ When you are frustrated, just remember that. ‘You will get there!’” he added.

Scott’s true sacrifice of love to Elaine is why they will always celebrate April’s National Donate Life Month – being grateful for another day to be together!