The Grace Year by Kim Liggett

I love dystopian stories but I have read a million and have seen so many played out in movies, so I was skeptical going into this one. Plus, there was a ton of hype surrounding it which can be scary. The Grace Year completely delivered and honestly found its way onto my favorite books' list.

Quick Summary: “No one speaks of the grace year. It’s forbidden. In Garner County, girls are banished for their sixteenth year to release their magic into the wild so they can return purified and ready for marriage.

But not all of them will make it home alive.

Tierney James dreams of a better life—but as her own grace year draws near, she quickly realizes that there’s more to fear about the grace year than the brutal elements and the poachers in the woods. Their greatest threat may very well be each other.”

I loved this book for so many reasons. It was intense and action-packed. There are also so many memorable characters along the way. I truly think the villain of this story is one of the most ruthless that I have ever seen. The prose is beautiful, heartbreaking and terrifying all at once. It has love, it has horror, it has adventure and is ultimately a tale of survival. Tierney’s story will stay with me for a very long time.

I haven’t read the classic Handmaid’s Tale from Margaret Atwood yet, but I definitely felt like this could be compared to what I know of that story. This hopeless world for women with every move documented and controlled. The society has messed them up so much by the time they hit their Grace Year that they turn on each other.

Five stars for this beautiful book!

I highly recommend this book for every single human. 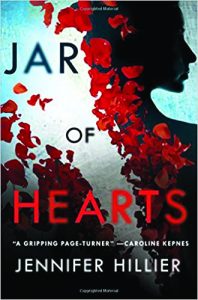 Jar of Hearts by Jennifer Hillier

I thought Little Secrets was twisty and memorable but this is the best thriller I have read in quite a while! It’s more than just a shock factor, even with so many twists it leaves your head spinning...Hillier is a master at creating memorable characters with a deep storyline, often lacking in suspenseful stories. She’s also a master at writing some of the craziest scenes and truly terrifying serial killers.

"This is the story of three best friends: one who was murdered, one who went to prison, and one who's been searching for the truth all these years . . ."

Geo is our main character and we begin with her being sentenced to prison for five years due to the involvement in her best friend’s murder, fourteen years earlier. What started as a novel about her stay in prison, which was completely fascinating in itself, turns into a total whirlwind of a story. Five years pass and Geo is released just as news of a string of murders, that look a lot like her best friend’s, comes out.

This was such an incredible read. My only warning is that it’s a very gruesome at times. I highly recommend it for thriller lovers! Can’t wait for more insanity from Hillier.