In high school, Cassidy Howard was unsure of his future. Several friends mentioned joining them in the National Guard, and it was something he was strongly considering. Then September 11, 2001 took place.

His perspective changed when he was mobilized to go to Iraq in 2004.

“I made some lifelong friends on this deployment, and it changed my mind on getting out of the military. I signed another three-year contract that extended to nine years,” he added.

In 2010, Cassidy volunteered to go to Afghanistan with several friends he had served with in Iraq.

“While I was there, this is when I decided that I would try to do at least 20 years in service. I enjoy the camaraderie and the experiences that you will not get anywhere else,” he said.

Fast forward several years, Cassidy and his wife Stacy own Howard Construction Company and have five young children. In September 2020, Cassidy left on his third deployment with HHT 1-113 CAV to Kosovo, where he co-leads a team in Ferizaj, Kosovo, which is similarly sized to Sioux City.

The United States military is working in partnership with NATO, and their main mission is to provide a safe and secure environment and freedom of movement for the Kosovo people. This military collaboration began in the early 2000s, after violent conflicts took place between the Serbian and Albanian people.

“This is a unique military mission but one I’m really enjoying. Kosova is a young state and doesn’t have a lot of money. They have issues with corruption and exports,” Cassidy explained. “We spend a lot of time talking to people and working with the youth. We look for potential issues and being aware of what takes place within the community, whether it’s electrical problems at a village or frustrations with COVID shutdowns earlier in the year.”

His team stays in close contact with the mayor and parts of government, such as finance, employment, pension, and labor inspection, and has sub-teams working closely with village leaders and schools. The U.S. has three teams presently serving in Kosovo.

Cassidy is currently helping a village leader with a park project and going with him to the architect. They always have language linguists with them on any ventures, which Cassidy mainly works with Albanian translators because of their location. He’s picked up parts of the language so he can begin conversations but appreciates his translators’ help.

“I can say ‘How are you doing?’ or ‘Things good or things bad?’ We work with a lot of youth groups who like to practice their English on us, while we pick up Albanian. It’s fun to just have meetings where we talk languages and talk about whatever is of interest,” he shared.

While deployed to Iraq and Afghanistan, there was less interaction with the locals. Cassidy said the people would sometimes wave at the soldiers when they would drive by and the kids would stop them on the side of the road to talk, but it was much more limited.

“In Afghanistan we did a little more interaction. For the most part, the people were very thankful we were there,” he added.

Kosovo has been totally different for Cassidy and his team. “We are kinda of like celebrities here! If we are walking around in the City Center, people will just stop us and tell us how much they respect us and telling us thank you for all the things we have done. Almost everyone wants to get their picture taken with us,” shared Cassidy. “A lot of them say they want to come to America and many of them say Kosovo should be our 51st state!”

English is being taught in the elementary school and the students learn a lot about American history. Kosovo celebrates American holidays like Independence Day and the people are aware of current events going on in the States. During the Kosovo conflict in 1998-1999, there were also a lot of refugees moved to the U.S.

“Almost everyone here knows someone that is living back there,” he said.

Back Home in Spirit Lake
While Cassidy is serving overseas, Stacy manages the home front. The couple has five kids under the age of eight, with three attending Spirit Lake Elementary. She also oversees the office side of the construction business, while Cassidy’s main foreman Troy Chalsma has stepped up to manage bidding, job sites, and tasks Cassidy would normally run.

“It is really hard to leave your family and business, but it makes it much easier when you have someone you really trust to take care of the business,” Cassidy said. “I’m also so thankful that Stacy has received so much support from family and friends and many who are willing to help out with the kids.” 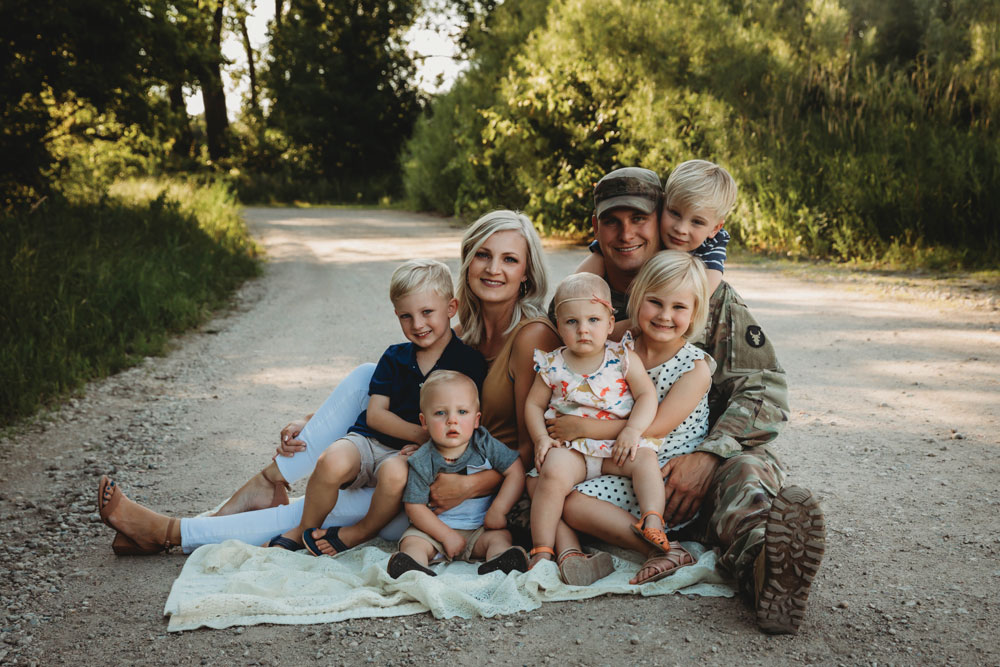 Stacy said she has avenues within the military to ask for help if it is needed, but the support she has received from the community has been such a huge blessing. Unexpected meals dropped off or a note of encouragement at just the right time has meant so much. At Easter, the kids woke up to the yard full of eggs. Their church, First Presbyterian of Spirit Lake, has been extremely supportive and encouraging, and their neighbors often step in whenever they see a need.

“I have to admit there are lots of hard, long days, especially in January and February, but our community is amazing. The Lord knows, because on that day where I feel like I’m drowning, I get an unexpected card or a gesture of encouragement. It is really appreciated,” Stacy shared. “I’m also very thankful we live in a community that is respectful of soldiers and their jobs.”

Stacy added that it isn’t always easy to ask for help but realizes at times she does need an extra hand. This brings assurance to Cassidy that his family has lots of support, allowing him to successfully do his job without extra worries of issues back home.

“We have great neighbors that help Stacy, and the little things people have done for the kids have meant so much,” he said. “We have guys on the team that have faced issues back home and it can become really hard for them to help because of the differences in time zone. This mission isn’t as concerning but in places like Iraq and Afghanistan, you really need to stay focused.”

Spirit Lake Spreads Joy Across the Ocean
During this past school year, the Spirit Lake Elementary partnered with Thrivent and purchased five boxes of Scholastic books and created thirty bags of sunshine. The funds raised also helped ship the items to Cassidy’s team in Kosovo. The three classrooms that participated were home to three of Howard’s children, allowing them to help their dad in a small way.

“The students were so excited to receive the books and treats!” Cassidy shared. “We enjoyed handing them out. We got lots of hugs for days!”

A Thrivent Action Team received a request from one of their policy members and gifted $250 towards the project. Amy Kueper oversaw the school team and recruited the help of students and their families to bring a touch of sunshine to students living across the ocean.

“I love creating projects that show kids how they can make a difference in someone else’s life, even if it’s in a small way. We wanted to do something for the families of our students who had a parent deployed,” Kueper said. “I knew the Howard family and talked to Stacy on ways we could help Cassidy and his team.”

Cassidy shared that the students in his community needed new books. Three classrooms: Mrs. Naatjes, Ms. Johnson, and Mrs. Munden shared the project with their students and their families, and $235 additional funds were raised to put towards the purchase of 75 books.

The families picked the books through Scholastic and then the teachers used the credits from the purchases to add a few more books.

“I love that we were able to help children in Kosovo with literacy and brighten their day,” Kueper added.

Students helped color the boxes inside and out, as well as made banners. They also colored pictures and helped put together thirty care packages.

“We made 30 bags of sunshine, where everything inside it was yellow, and also added candy and gum to the care packages,” Kueper said.

Besides sending boxes to Kosovo, Ms. Steiner’s first grade classroom put together four big boxes of supplies filled with encouragement to a student’s stepdad who is currently serving at an embassy in Iraq.

Coming Home
The current plan has Cassidy’s team returning to the U.S. in mid-August, something Stacy and her kids are so excited about. The family is thankful for FaceTime, as this feature wasn’t readily available during Cassidy’s last deployment.

“We are really looking forward to dad being home, but we also feel very lucky and so blessed to live in this community who has supported us in so many ways,” Stacy said. “So many people have helped us get through these past months.”