On June 8, 1835, the 1st Iowa Dragoons embarked on an expedition for the United States Army to explore Iowa.
The commander, Stephen Kearney, previously led a group from the Missouri River near Omaha to the site of Fort Snelling at the confluence of the Minnesota and Mississippi rivers. The Expedition in 1835 represented the first major American exploration of the interior of what the United States defined as Iowa in the decade to follow. Lieutenant Albert Lea recorded observations as the Dragoons marched their horses up the Des Moines River to the Boone forks and beyond. In 1836, Lea’s Notes on the Wisconsin Territory, particularly pertaining to the Iowa District spread his observations far and wide. The documents left behind by Kearney, Lea, and others represent important early American notes on Iowa.

In 2021, I set out to follow in the footsteps of the Dragoons in order to compare their observations of the Des Moines River with the realities of today.

First, you might wonder “what is a Dragoon?,” “do dragoons breathe fire?,” or “I thought Albert Lea was a lakeside town near the Iowa-Minnesota border.” A dragoon is a type of light-infantry soldier used by armies dating back to 17th century France. In the American Revolution, George Washington raised four regiments of Dragoons to fight redcoats throughout the colonies. Fast forward to the earliest years of Iowa’s history as an American territory and the dragoons again play a prominent role. Stationed at forts on the edge of American influence and control, the 1st Iowa Dragoons assessed the lands Indigenous peoples lived on, took careful notes on their surroundings, and tried to keep the peace between all peoples living in the area.

I first encountered the dragoons on the famous “Dragoon Trail” highway marker signs positioned by the Iowa Department of Transportation along the Des Moines River from Fort Dodge to Lake Red Rock. Growing up in Pella, I often wondered about the signs featuring a dragoon positioned on a white background and outlined in brown. As I grew older, and entered history as a career, I decided to conduct my own expedition to mirror the journey of the Iowa Dragoons.

From the Dragoons’ march in 1835 to our current moment, Iowa’s landscape changed in incredible ways. As an environmental historian I study both the natural and the built environment. The natural environment consists of many things you might guess: plants, animals, weather, water, soil, and other phenomena like prairie fires. The built environment consists of things created by humans: buildings, roads, bridges, as well as other practices like tiling and tilling. Over 94% of Iowa’s natural environment changed radically during the onset of American agriculture, most notably through the conversion of prairie to farmland.

Carefully plotting out the best possible route by using a map created by Albert Lea as a guide, I decided I would set off from Montrose, a small town on the Mississippi River, in May of 2021 and follow the Des Moines River north and west across Iowa. I broke the journey into three parts: Montrose to Lake Red Rock, Prairie City to West Bend, and West Bend to the Iowa-Minnesota border near Estherville and beyond to Mini-Wakan State Park on the north shore of Big Spirit Lake. 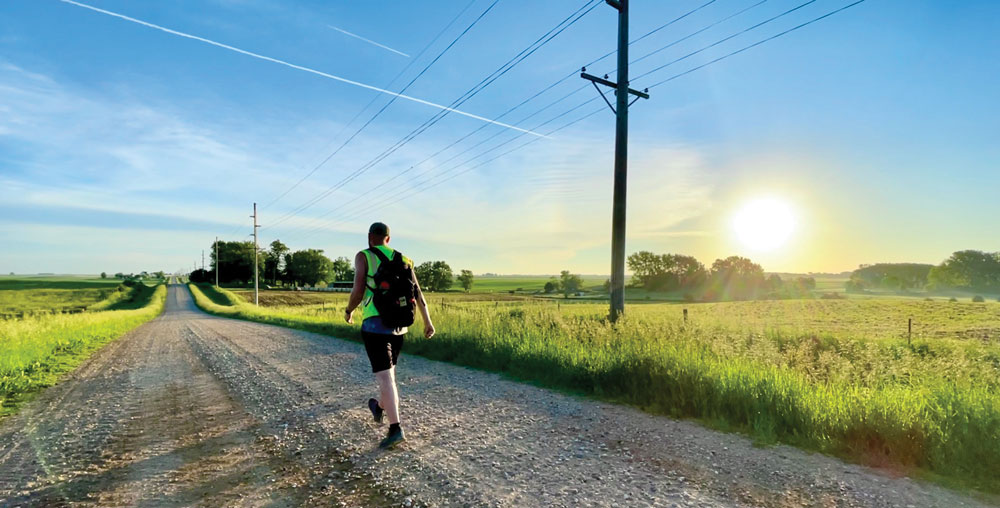 Following in the exact footsteps of the Dragoons proved out of the question: their expedition stretched over 1,000 miles from Montrose traveling northwest roughly along the Des Moines River to modern-day Boone County, then turning northeast across northern Iowa to Wabasha’s village near the Mississippi, back west toward Albert Lea Lake, and eventually descending the Des Moines to Montrose. Since the expedition recorded the most notes about the landscape surrounding the Des Moines River while also discussing native peoples living in Iowa, I decided to focus on those two goals when constructing my own route. Although the Dragoons did not venture to the Iowa Great Lakes region, I decided to finish at Mini-Wakan State Park and Big Spirit Lake to focus the end of my journey on the Dakota in Iowa. My doctoral research at Iowa State University explored how Inkpaduta and the Wahpekute Dakota lived in Iowa in the years leading up to 1857, and ending at Spirit Lake seemed a fitting place to end. 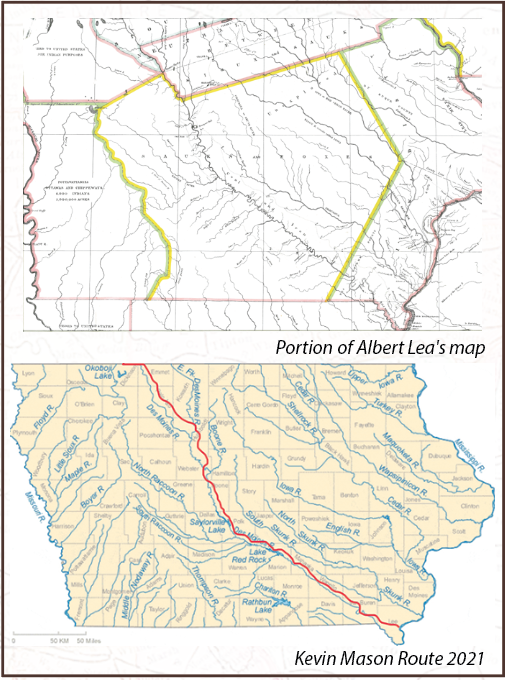 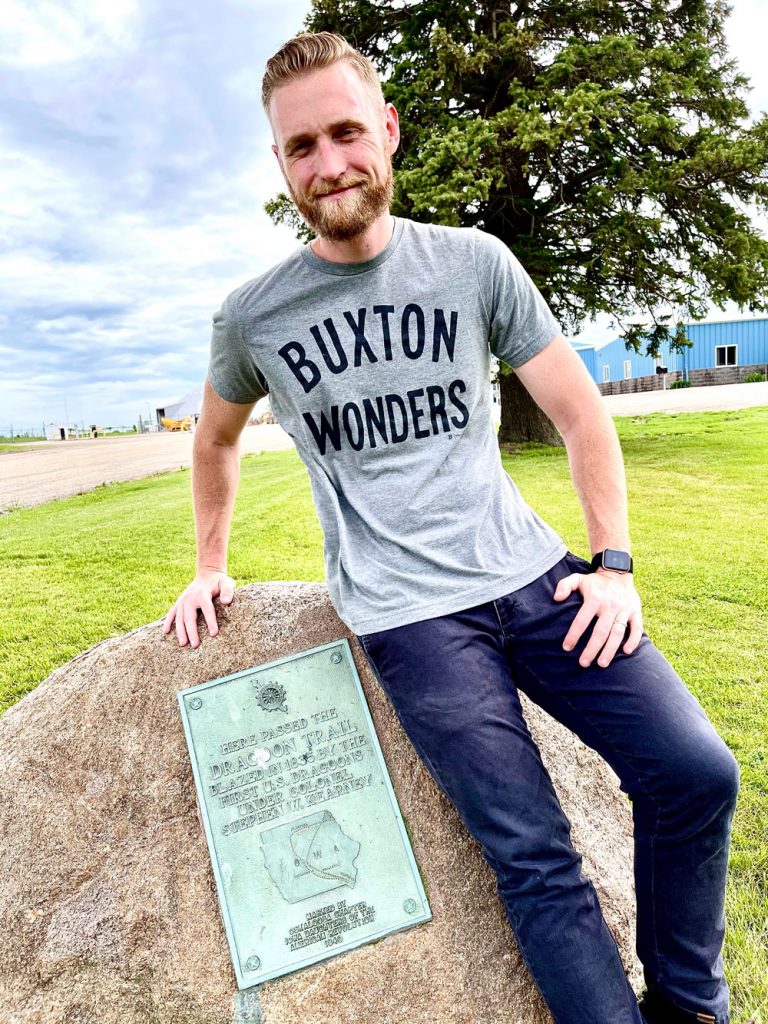 Before departing, I started working on researching as much as possible and determining how to record my observations. I compiled the available sources, took notes, and posted summaries of books and articles related to Iowa’s environmental past on a website (www.notesoniowa.com). I also consulted filmmakers and photographers to inquire about what equipment I needed and how to use it. I also started to log lots of miles to prepare my feet for a trek requiring fifteen to twenty miles of walking per day.

By early May, I set out. A small town nestled between Keokuk and Fort Madison and the head of the Des Moines Rapids on the Mississippi, Montrose today offers glimpses into a rich historical past. Iowa’s first school, started by Isaac Galland, rests just to the south of the town, and a marker for a Sauk woman named Quashquame greets visitors approaching from the north. The site of First Fort Des Moines stands in Montrose directly across the Mississippi from the rebuilt Mormon Temple in Nauvoo, and after the Dragoons abandoned the fort in 1837, the buildings hosted fleeing Latter Day Saints as they fled west to avoid religious persecution. Joseph Smith, Mormon Prophet, hid from assailants at the fort site in 1844.

Weather represented the first major challenge I faced. Setting off in early May I anticipated rain, but spent the winter dreaming of sun soaked days on the lower Des Moines. Instead, I spent the first week of walking under consistently stormy skies. During the first day, the rains saturated me to a point my cellphone stopped working, leaving me momentarily without a vital lifeline should my situation take an unexpected turn. However, I continued to make progress along the Des Moines slowly wandering through the Villages of Van Buren County.

Riverfront communities including Farmington, Bonaparte, Bentonsport, and Keosauqua, remind visitors of Iowa’s early settlement. During the earliest years of Iowa, the Des Moines River stood as the most significant means of transportation through the heart of the territory. Contractors immediately set to work installing a series of locks and dams, making possible the ascension of a steamboat as far north as Fort Dodge. While traffic accelerated on the river, so did the population and prosperity of towns springing up on the banks. The coming of the railroad in the late 1800s heralded new opportunities for transport while also beginning a slow decline for the towns on the lower Des Moines. Today, communities persist to maintain beautiful buildings in downtown districts along the river. However, each community consistently faces challenges from the rising waters of the Des Moines. Major floods in 1851, 1944, 1993, and 2008, all threatened the ability of communities to preserve the past of important historic structures along the river.

I came across many significant efforts to control the Des Moines throughout my journey. I closed the first portion of my walk at the Red Rock Dam, constructed in the late 1960s. The dam, and the massive reservoir held behind the gates, flooded out a series of towns including the one which gave the dam and lake their names. The Saylorville Dam, another hundred miles or so up the river, also came on line in the second half of the 20th century to provide the United States Army Corps of Engineers with the ability to try to hold back the Des Moines. Communities throughout have creatively sought to insure against rising waters, notably in Des Moines with a series of trails throughout the floodplain offering recreational opportunities while mitigating risks from flooding on neighborhoods and commercial districts.

I saw a plethora of significant historical sites on my way to Spirit Lake:

sites of military forts at Montrose, Ottumwa, Des Moines, Fort Dodge, and Estherville; markers and structures celebrating historic moments in Iowa’s history like the Kate Shelley Memorial High Bridge and the Chief Wapello Historical Park; and many state parks offering recreational opportunities while preserving remnants of what Iowa looked like before agriculture. Seeing Iowa slowly, on foot, allowed me to really take in the people and places I encountered along the journey while also having time each day to fully digest my thoughts about the state’s past, present, and future.

By the time I arrived at Spirit Lake tired, footsore, and sunburnt, I completed 371 miles on foot. I came away with a better understanding of the incredible environmental change which reshaped Iowa into the familiar agricultural landscape we find today.

View photo essays, videos, and other content at www.notesoniowa.com. Kevin Mason also plans to complete documentary and book projects related to the project.