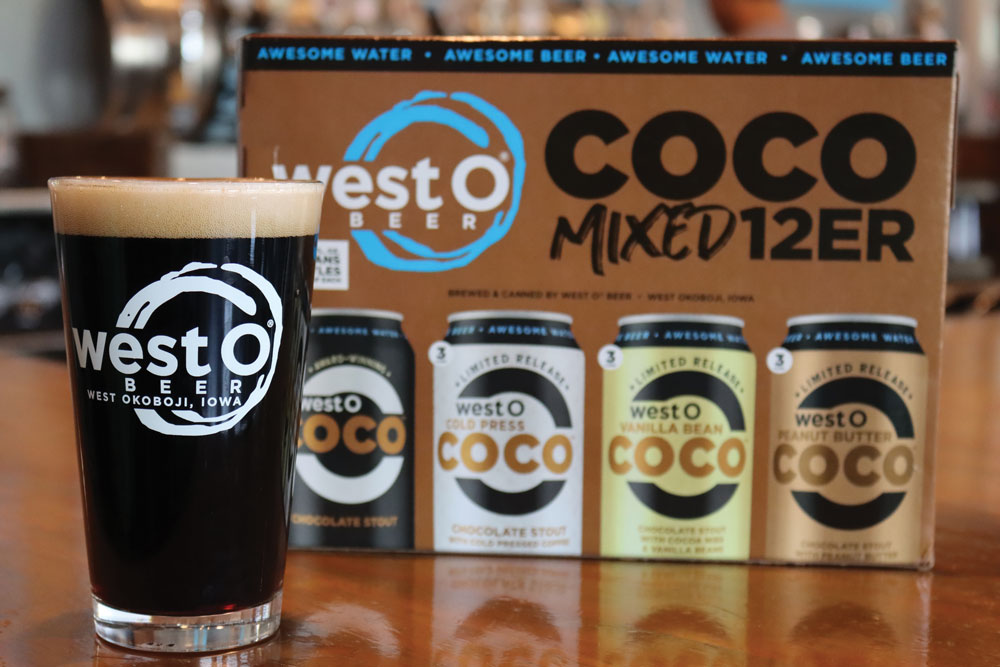 Known for their specialized craft beer and family-friendly atmosphere, West O Beer’s tasting room has been the place to be this summer. Averaging over 1,000 customers a weekend, the West Okoboji location has 14 options on tap ranging from light to dark, fruity to bitter. West O also distributes six to eight canned options at major liquor stores throughout the Midwest and is on tap at locations in all the region’s metro cities.

“We really want to make a beer for everyone, and average is not good enough. We don’t want to waste your time,” said West O owner Matt Matthiesen. “We also want to be a family-friendly place where you can bring your kids and pets.”

Party Fun Turned Occupation
For Matt’s 30th birthday, Matt and his wife Michaela lined up a home brewing session to celebrate with family and friends.

“I remember my dad doing it when I was a kid, but I hadn’t done it since,” he said. “I’m pretty sure that first batch of Amber Ale wasn’t very good, but we still drank it.”

It didn’t take long for Matt to become a brewing pro. They soon averaged six beers on tap and made at least 100 batches since their initial attempt. Michaela’s dad also contributed by planting barley and hop vines.

In 2008, the couple started putting together a business plan, milling around the idea. Shortly after, they followed by buying an empty lot in West Okoboji. In 2013, West O officially opened with one full-time employee. Now, they have seven full-time and eight part-time employees on staff, with the entire operation taking place on-site.

“Initially, we didn’t have huge plans. We wanted to hire staff that also enjoyed craft beer and then get the community around us. We wanted to be the local beer,” Matt shared.

Giving Back
Water is the most constant ingredient and flavor in beer, and the spring-fed water from West Lake Okoboji is the biggest reason why the Matthiesen’s purchased the empty lot in West Okoboji. “The lake has spring-fed, naturally soft water which is filtered and then we filter it again,” Matt explained. “Because we value this water, we also give back a portion of our proceeds to help preserve and protect the natural resources of the Iowa Great Lakes area.”

West O is not only involved in helping preserve and protect the natural resources. They are also great supporters of the Northwest Iowa Humane Society. A portion of West O Beer's spent grain is used to make dog biscuits. From there, volunteers take the grain and make them into the dog biscuits which then are sold at a number of different places in the area, including here at West O. Proceeds from the biscuits go back to the Northwest Iowa Humane Society.

Quality Craft Beer
West O now buys high quality malted barley and hops, which is then mixed with beer yeast and water. They extract the sugar from the grain and then boil the sugar solution with hops. The bitterness of the hops is then added to flavors to create different beer spices.

Behind the taproom, there is 4,200 square feet of state-of-the-art brewing and packing equipment. They have 12 tanks that can create either 500 or 1,000 gallons of craft beer at once.

“Every detail and piece of equipment was chosen and placed with our process and top quality in mind. There are no corners cut. The back room looks like a giant science lab,” Matt said.

The microscopes and testing equipment check everything from flavoring to the oxygen levels in cans. Having low oxygen levels is especially important and West O makes sure their cans are below 100 parts per billion. “When a can leaves our warehouse for distribution, it could be 90 days before someone opens it. We want people to trust us that once the can is opened, the beer won’t be stale,” he explained. “Quality control is very important throughout our entire process.” 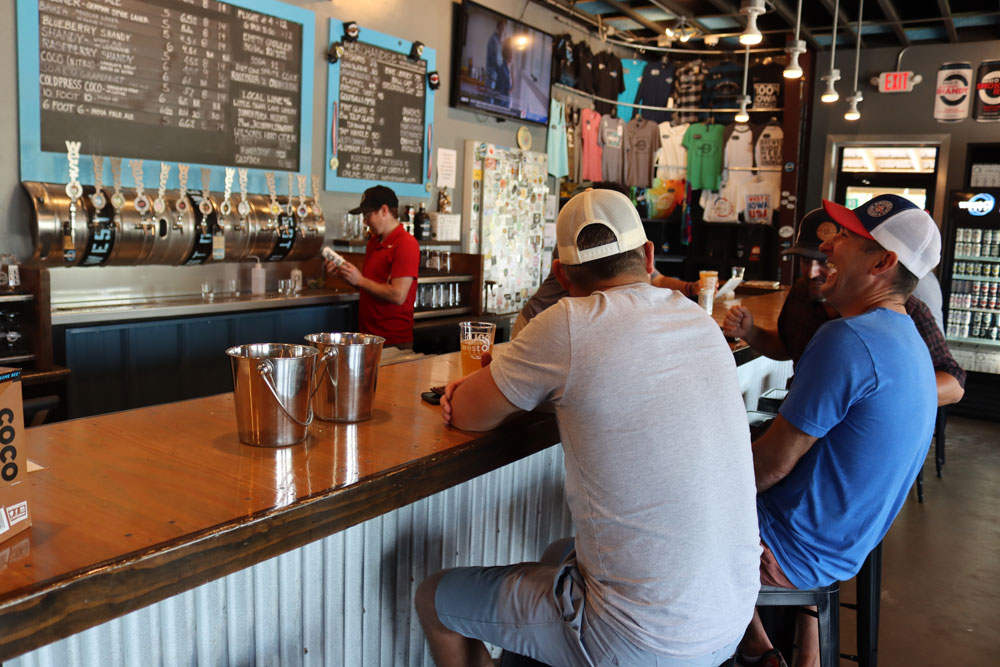 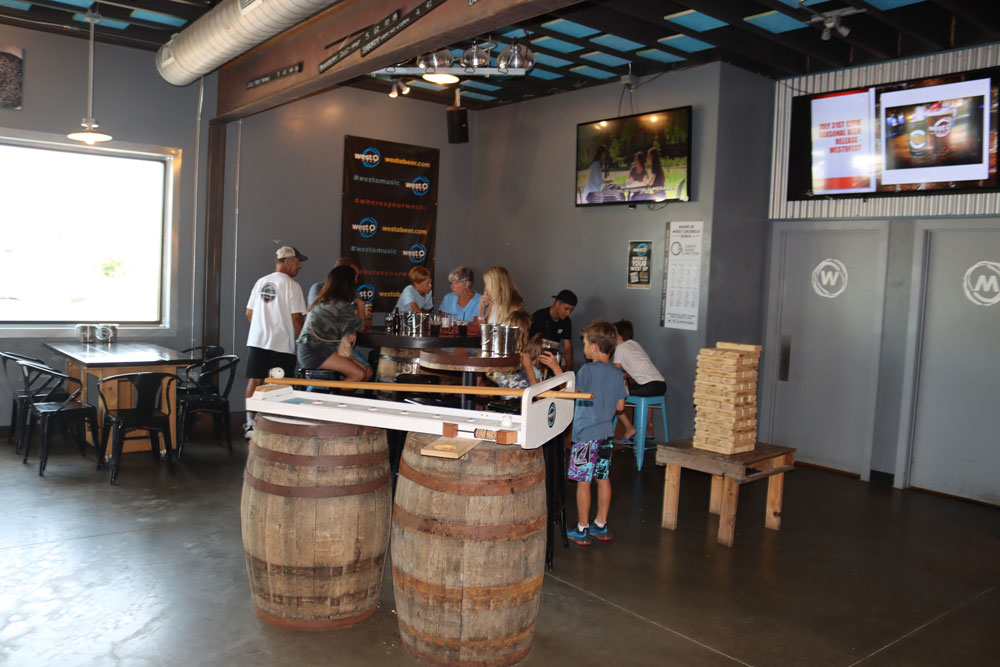 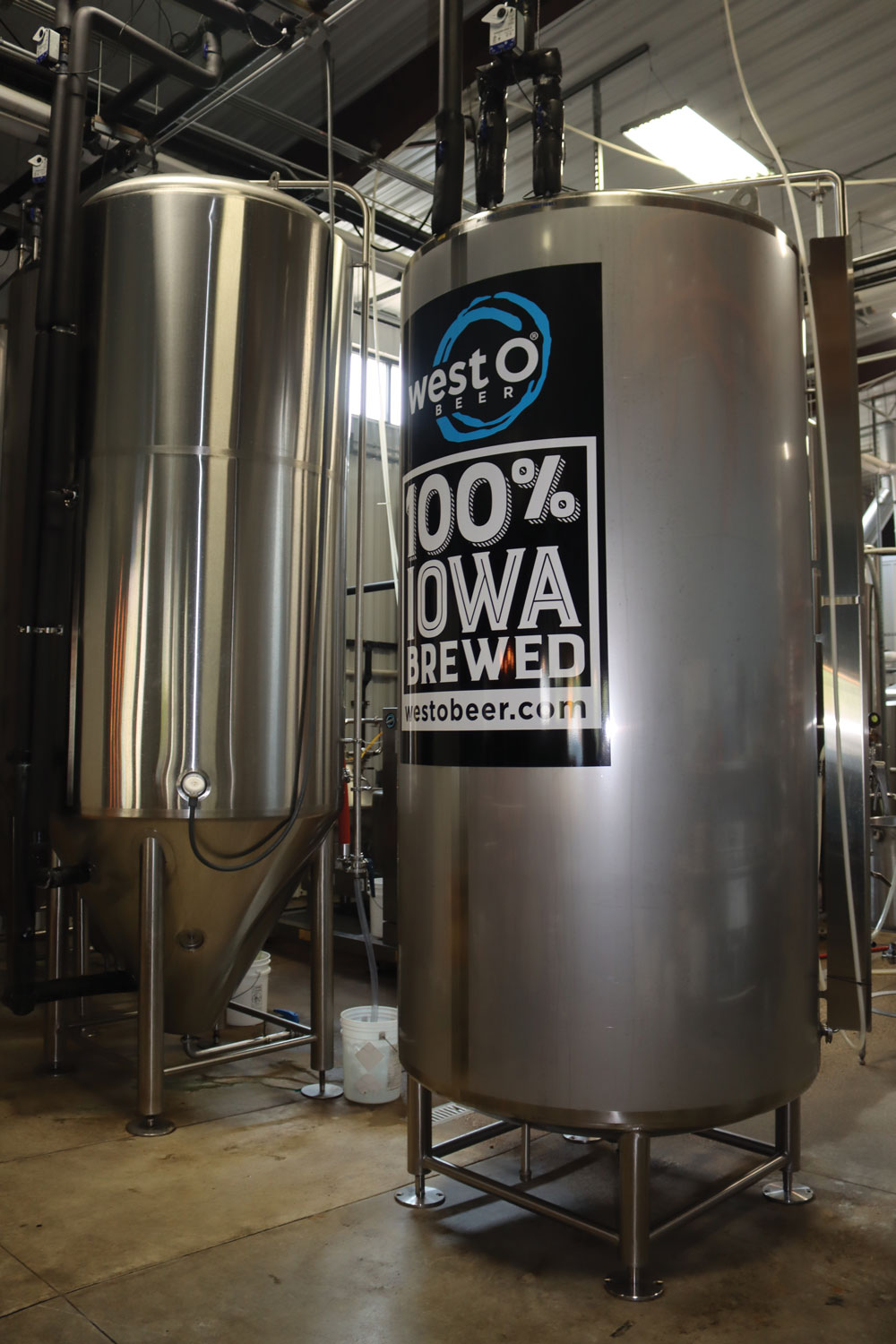 Beer Styles
For the past three years, Tyler has managed the taproom and plays an important role in making sure there is a flavor for everyone that walks through the door.

One of the popular year-round craft beers on tap and in cans is West O’s COCO Stout™,   which was a 2014 and 2015 Gold Medal Winner at the Great American Beer Fest and a 2016 Champion at Des Moines Register’s “Beer Brackets.” The milk stout combines with lactose sugar, while the Cocoa nibs mixes with bourbon vanilla beans to create a creamy and chocolaty taste.

“We are coming out with a mixed COCO Stout box this fall that will have four different flavors—peanut butter, vanilla, cold press coffee, and our regular option. We are really excited about it!” Tyler said.

During the summer months, West O creates lighter options like the lemon shandy or the strawberry margarita seltzer. They also teamed up with Arnolds Park Amusement Park to create a Cotton Candy Shandy to raise funds for the Legend Roller Coaster, which has become a popular flavor and can be purchased at the taproom.

This fall, West O is releasing the Orange Shandy for the first time. They rotate different flavors in and out of the taproom according to season and popularity.

“One of the trends we see right now is lighter, fruity beers with a lower ABV (alcohol by volume),” Matt added. “Some people are desiring lower carbs and are health conscious but still want to enjoy a quality beer.”

Whenever West O tries a new beer, they will create it in smaller volume and test it out in the taproom.

West O relies on their customer feedback whenever they create a new beer or make tweaks to older styles. They listen to their distributors and gather information from customers. Matt said they follow the trends and what peoples are purchasing.

His favorite thing is to sit down with a beer and talk to customers.

“We have people from all over the United States who come through the door. It’s fun to hear their stories and why they love quality craft beer,” he said. “We work hard, and I really appreciate our staff. I want them to have a good experience and not think of this as just an average job. I want them to be proud of what we create.” 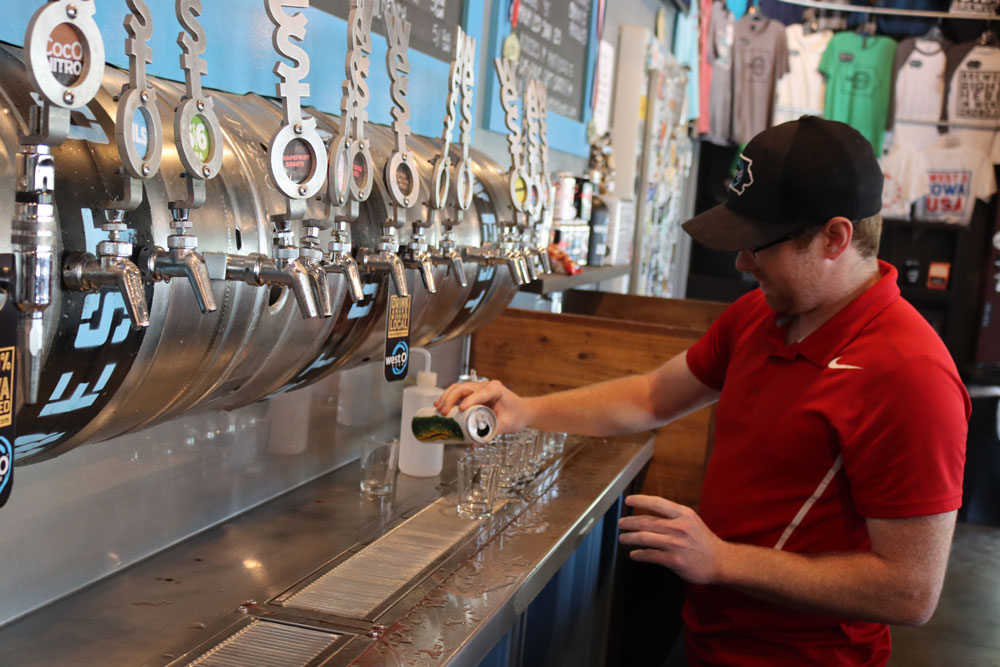 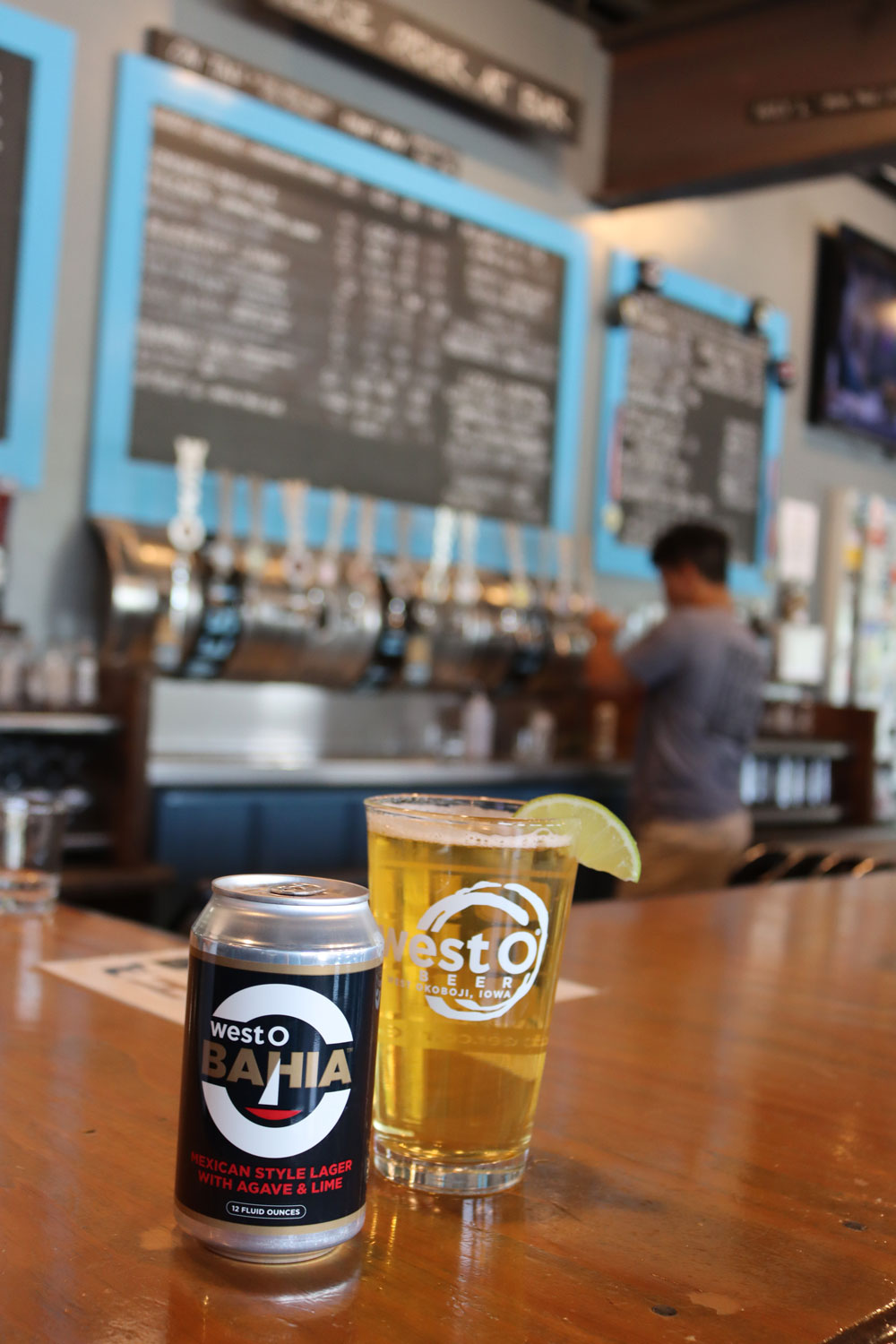 West O Beer is open every day from 12-10 p.m. They offer light snacks and always have root beer and cream soda available. There are a variety of games offered and pets are allowed on the patio. For more questions, visit www.westobeer.com.