Hank Hall Showcases “What If” at the Pearson Lakes Art Center
A cute little Beagle dog named “Taffy” was the inspiration for Hank Hall’s initial artistic interests. These pencil drawings led to an art degree and 34 years of sharing his art passion to students in three Iowa school districts.

Retired from teaching since 2005, Hank’s “spare” time is filled with exploring art and sharing his “What If” creations in art shows throughout the region, with his most recent being displayed at the Pearson Lakes Art Center from August 26 through October 30.

“I had fantastic students through the years and had a ton of fun with them, with many students pursuing art,” Hank shared. “Retirement has given me more time to create and allowed me to pursue different ideas. I get to make things for my own enjoyment.”

Art Beginnings
As a second grader, Hank loved playing with his family’s new dog. For the first time, he began sitting down to draw his new friend.

“I loved that dog,” he said. “I would sit down with a pencil and paper and draw. I was amazed that I could draw my dog; this is what started me drawing the things I saw around me.”

The family moved to Spirit Lake from Manson, IA when Hank was in junior high school, at the same time the art program was being introduced at Spirit Lake High School. Still interested in art, Hank decided to take art classes from Mrs. Cleo Lohse.

“I was the quarterback and an artist, and a lot of my friends initially gave me a hard time,” he shared. “I decided to sign up for a class. I think it turned out pretty good; it was 18 girls and one boy. My friends were jealous later!”

It didn’t take Hank long to become serious about the art world, and he discovered he had a gift. He enrolled as an art major/biology minor and was also recruited to play football at Northwestern College in Orange City, along with his friend and teammate Jan Bolluyt.

As quarterback both his junior and senior years, Hank helped lead the Red Raiders to a 7-2 record.

“I loved Northwestern. I had great friends and loved school; my goal was to teach art,” he added. “I was very fortunate to sign a teaching contract for the Marshalltown district before graduating.” 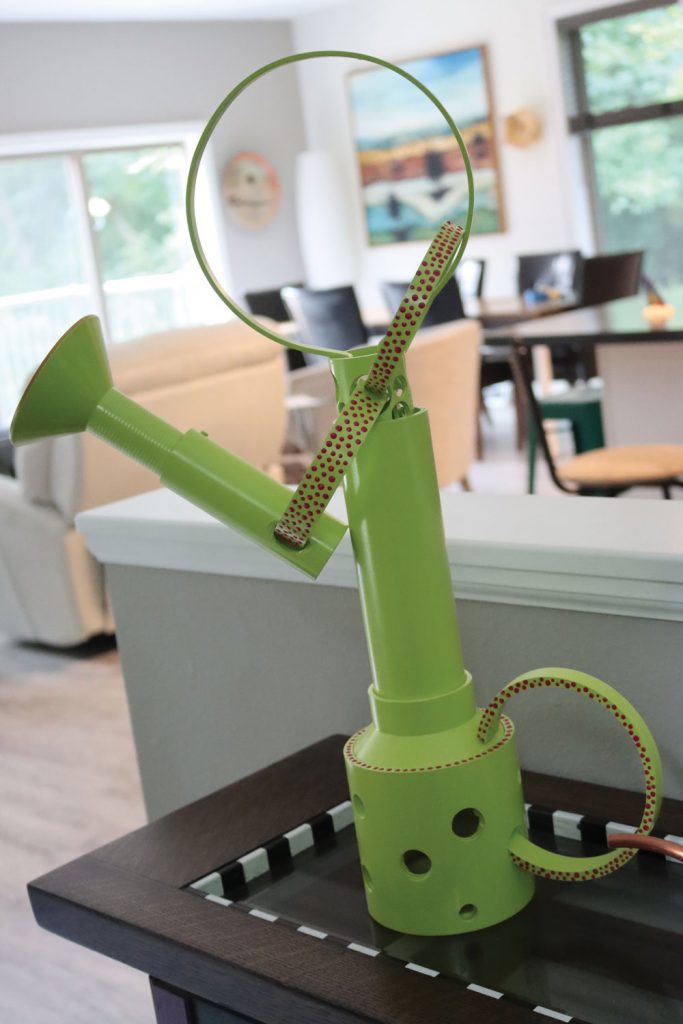 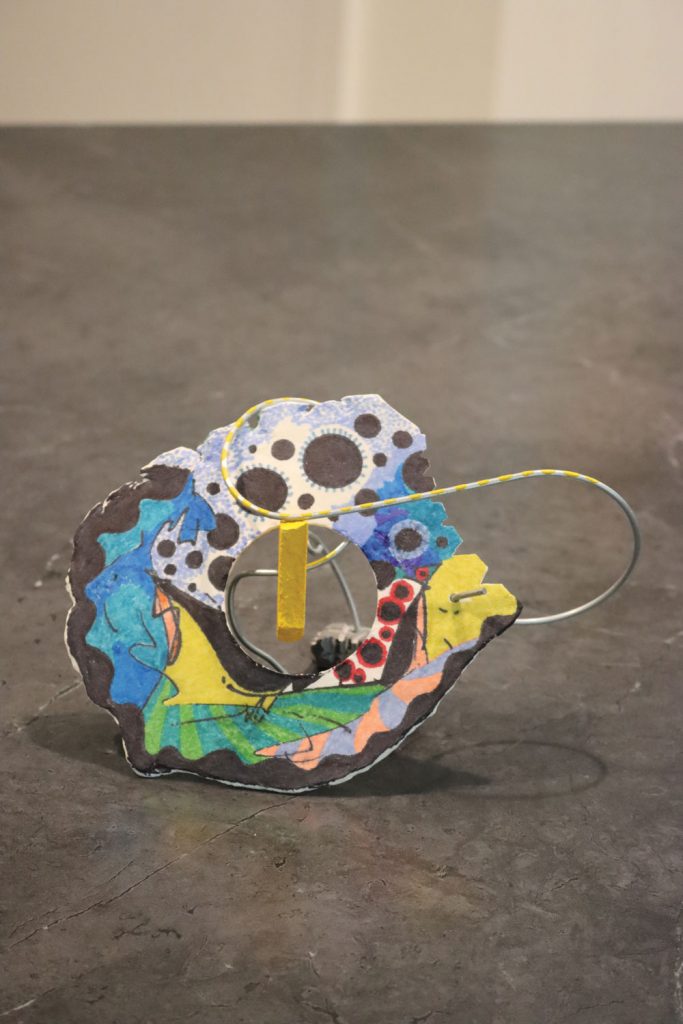 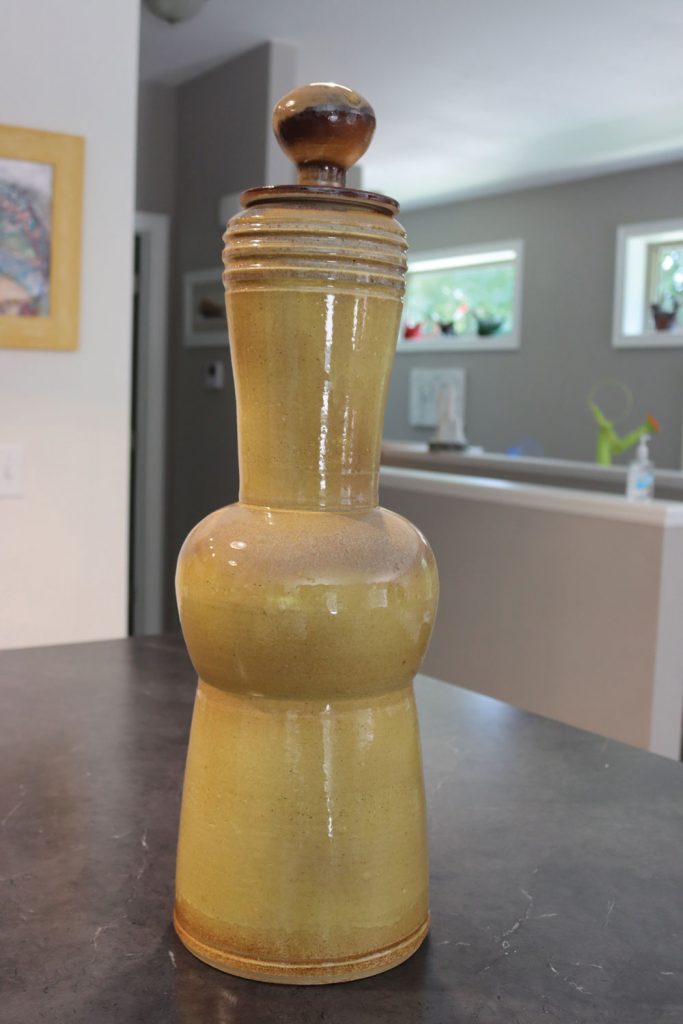 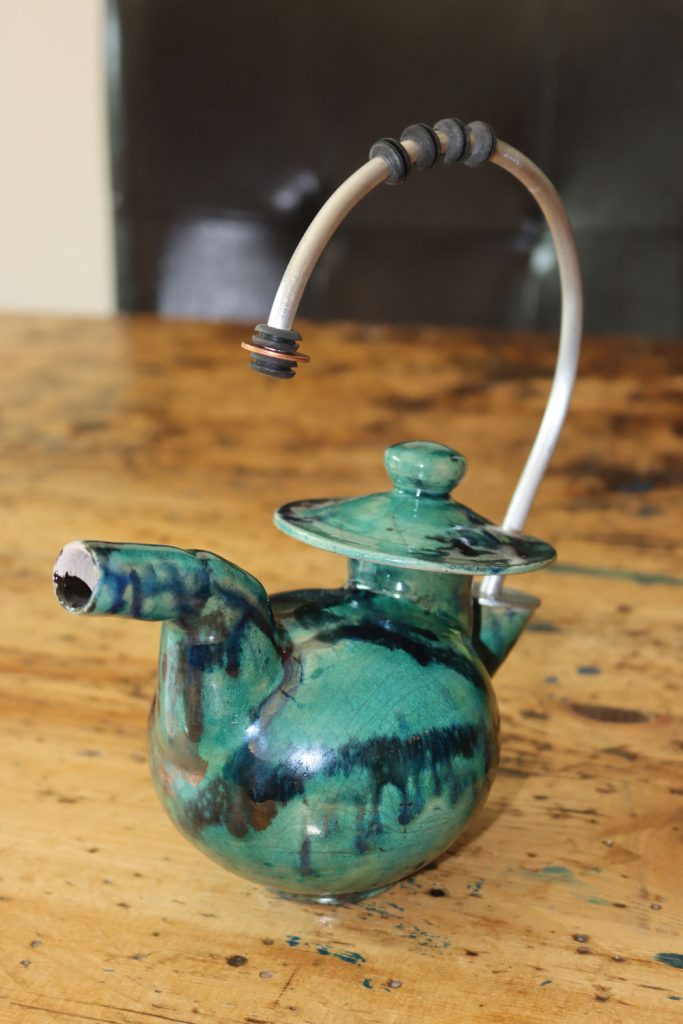 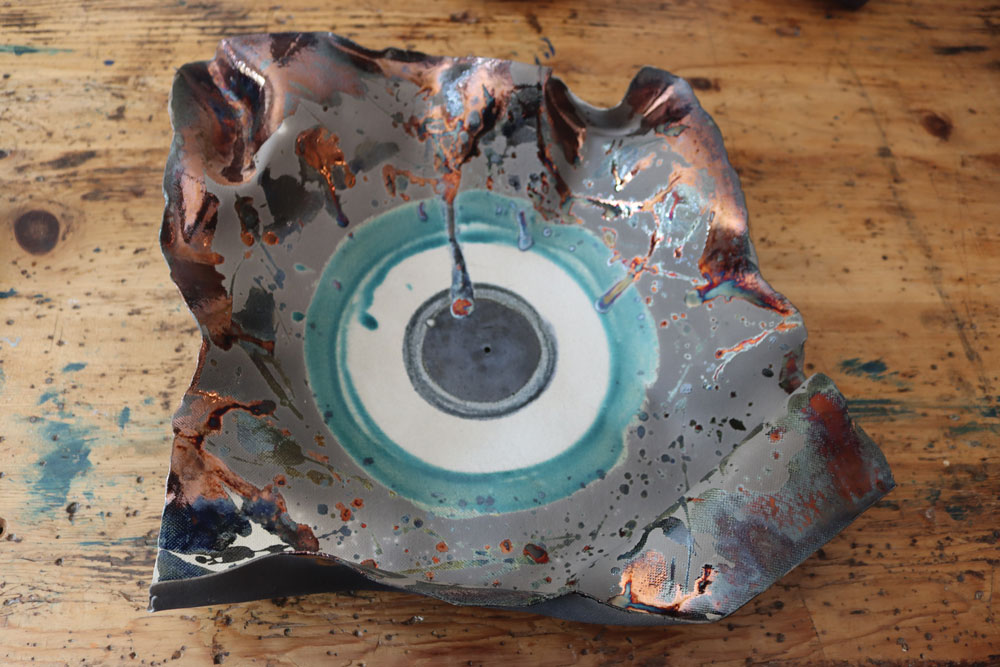 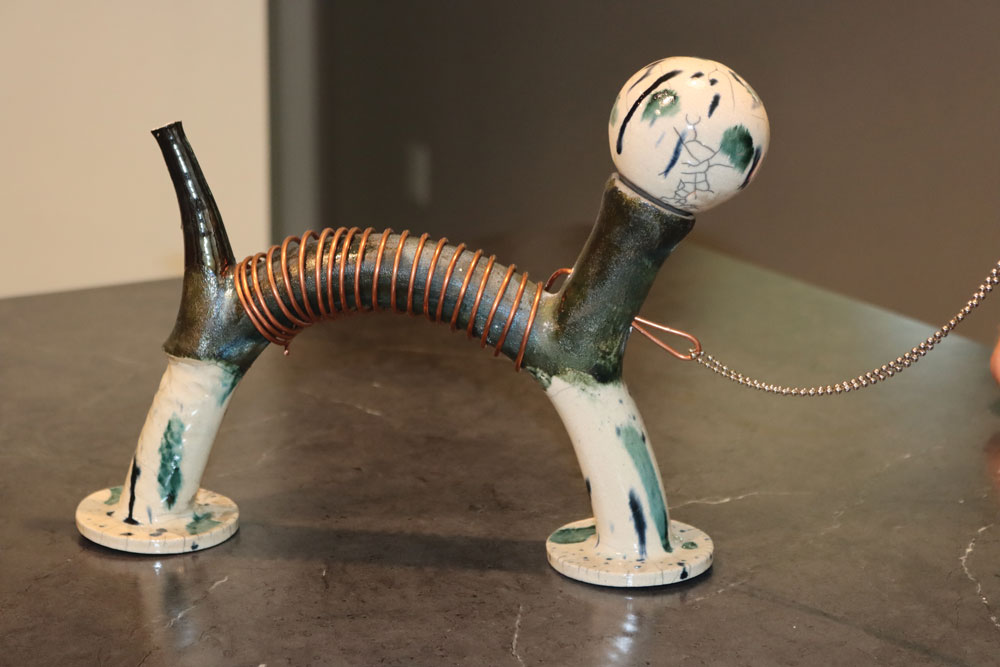 A painting and printmaking student, he was looking forward to his first teaching job and the opportunity to share his art passion. Halfway through the summer, he received a call from the school’s superintendent.

“He called to say, ‘We are starting a pottery program at Marshalltown, and we want you to oversee it,’” Hank remembered. “I didn’t make a sound and then said, ‘Have you looked at my transcript? Can you look at it and then call me back?’”

A few minutes later, the Marshalltown superintendent called back, and Hank asked him what his thoughts were. “I then said I haven’t had any pottery classes and only briefly touched clay during student teaching. My new boss said, ‘I recommend you find a good book.’”

However, teaching these pottery classes hooked Hank and he fell in love with the art medium. “I really enjoyed the process of pottery, and it gave me the motivation to get the pottery program off the ground,” he added.

New Opportunities
After 17 years of teaching in Marshalltown, the community’s work situation had gone downhill, eliminating several teaching positions throughout the district. Hank discovered he received the pink slip, which was hard news to take.

“We thought we’d be in Marshalltown for the rest of our lives, but it became an opportunity to move our family to Spirit Lake, where Sheryl’s parents still lived,” Hank said.

His wife Sheryl was a Russian major in college, and she was hired at Spirit Lake High School in 1987 to teach English, later adding Russian. Hank worked at Carpenter’s Interiors but discovered he missed teaching, so he began looking for new options.

The following school year, Hank was hired to teach K-12 art at Graettinger, where the program was transformed from art on a cart to the art department being located in what was once the wrestling room.

“I taught there from 1989-1991, until I received a call that my high school art teacher Mrs. Lohse was retiring at Spirit Lake,” he explained. “She was inspirational in directing me into art, so it was quite the honor to take it on from her.”

Creative Methods of Teaching Art
Under Hank’s tutelage and creativity, the Spirit Lake Art Program continued to grow. He incorporated exercises from Betty Edwards' book, “Drawing on the Right Side of the Brain.” “I said if you hang in there, you are going to get better and better at your art skills,” he added. “I’d spend six to seven weeks teaching fundamentals like shading and then we started doing fun things.”

Hank loved to inspire his students to consider art outside of the box, especially his more advanced students. He often had 1960s music or Vivaldi playing throughout the art department, which he used as inspiration for projects like fishing pole drawings.

To start the exercise, the music would be playing in the background. Then he asked them to listen carefully while they were drawing. Next, he had them draw with the music as inspiration, which especially impacted the fishing pole drawings where a sharpie marker was attached to the end of a fishing pole.

“We’d start on Monday with a big blank piece of paper on a big easel,” Hank said. “We’d have the music going, and I’d randomly stop it, which meant they also had to stop drawing. I wanted them to feel the music and then express those emotions through lines and movement on paper. The drawings were outstanding!”

Another creative art assignment was an “ice fishing” project in the advanced drawing class. Everybody received quality paper, and they had to create their own “bait” from anything that would make a mark on paper. The paper was then placed on the floor. “They had to be ‘quiet’ and not scare the fish away,” Hank explained. “I had quite the chuckles when ‘bait’ would run out and these junior and senior students would be tip-toeing across the room to get more. It was such a treat to teach art in Spirit Lake.”

Through the years, he had numerous students compete and receive art scholarships from the University of Northern Iowa. One year, he had two students selected for the art scholarship finals competition and both received awards.

“I wanted kids to realize they could do something with art and there were ways to get money for doing something you are passionate about,” Hank added. “Current Spirit Lake High School Art Teacher Brad Travis was one of my very best students.”

Sheryl retired as high school principal at Spirit Lake in 2004, and in 2005, Hank was feeling led to join her. He called Brad and said, “Spirit Lake needs you back!”

“It was such a treat to teach where I was inspired to pursue art and do the same with others,” Hank shared. “Then it was such an honor to have one of your own students continue the art program with the same passion and creativity.”

Retirement Art
Since fall 2005, Hank has been motivated to create art in numerous mediums. His home is filled with countless creative pieces—some functional while others are simply for viewing and entertainment. Throughout the years, much of this artwork has been sold and displayed at places like the Pearson Lakes Art Center or his former art studio Art on 16th, which was located near downtown Spirit Lake.

“With whatever I create, titles are important to me and sometimes I design some smart aleck creations, like celebrating the anatomy of a clay teapot,” Hank laughed. “Or while I love pottery, I don’t like glaze, so I have to force myself to do that part of the process.”

For the past several years, Hank has enjoyed his studio from the inside of a small grain bin, as well as his heated garage.

“I’ve always loved grain bins, and Sheryl knew I wanted to add one at some point,” he said. “It is the perfect atmosphere for creating, even if it means sweating or freezing at times, depending on the outside weather.”

His current art show is named “What If: From Hank Hall’s Point of View.”

“My work and my teaching have always been driven by asking myself, 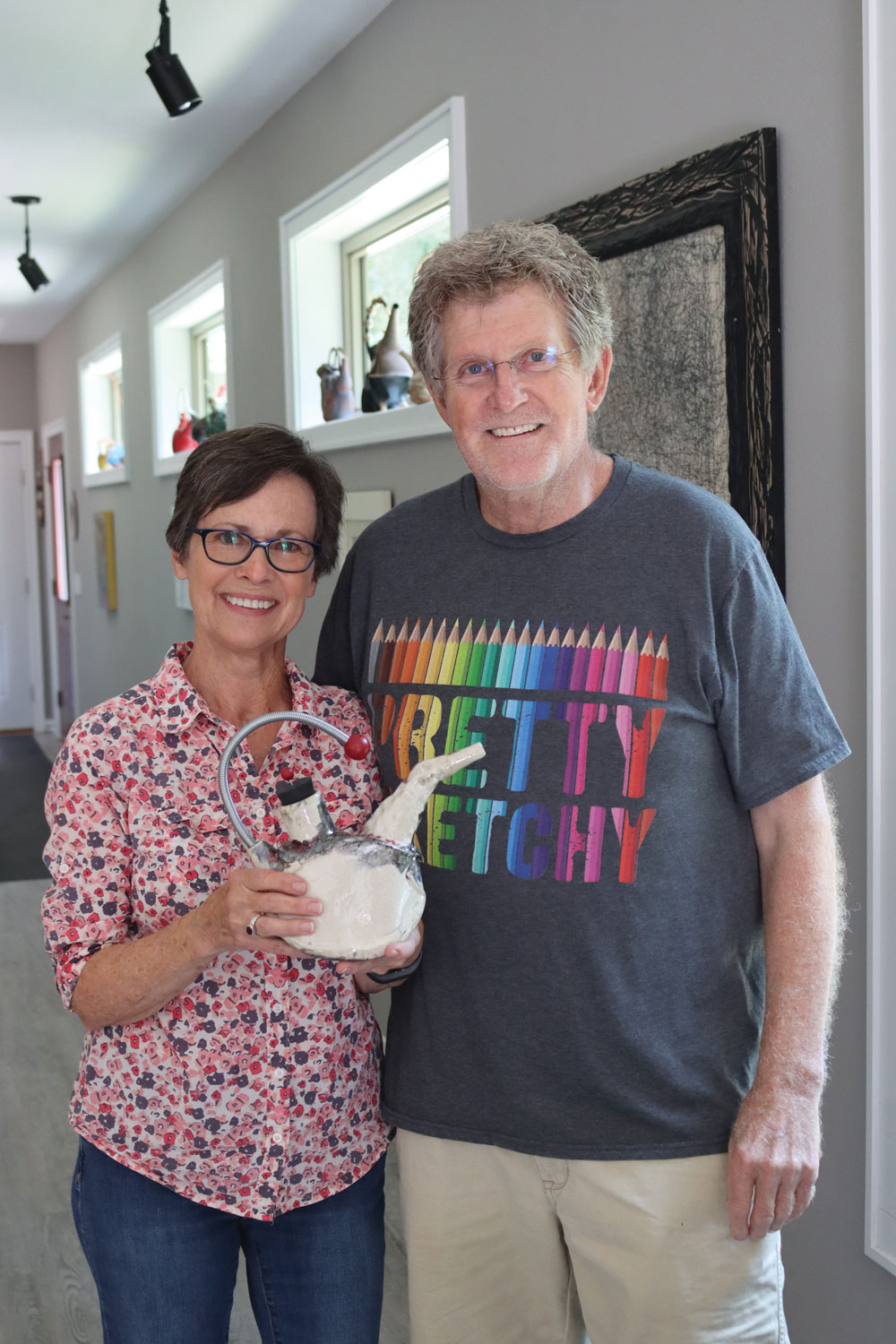 ‘What if?’ This question sparks my curiosity about materials and processes and how to make my art personal. In some cases, the pieces in this show include new experiences for me with paper clay, raku firing, and mixed media sculpture,” Hank explained. “While preparing for the show, I was motivated by the unrelenting pandemic to draw a daily journal about the coronavirus and political unrest. I also spent hours each day immersed in clay and mixed media. The work in this show lightened my emotions and greatly entertained me, and I hope you find it a worthwhile experience to look at the results of ‘What If?’”

While he has functional art available for purchase, some of his favorite pieces are made with paper clay, a raku firing in June, or what he calls, “the escape of the Roomba.”

This is why “What If” is so meaningful and why so many students have been inspired by Hank Hall’s creativity through the years. While not actively teaching every day, this talented artist lives on in former students like Travis but also anyone who takes the time to enjoy his artwork and ask questions.