Gilbert Park is a favorite spot for people of all ages, whether enjoying a picnic by the water or playing games on the playground. Situated on the north side of Spirit Lake and along East Lake Okoboji, many visitors don’t realize the prestigiousness of the park’s name.

Established in 1926, Gilbert Park was named after one of Spirit Lake’s most famous residents.

Fred “Dood” Gilbert was born on Dec. 18, 1865 and became famously known as the “Wizard of Spirit Lake.” An internationally known trapshooter from 1895-1927, the famous sportsman won countless trapshooting awards and is enshrined in the Amateur Trapshooting Association Hall of Fame. His memorabilia is a favorite display at the Dickinson County Historical Society and Museum in Spirit Lake.

Most recently at the musuem, one of Gilbert’s famous trapshooting guns was taken out of its case and inspected for the first time since 1976.

“We were searching for the gun’s serial number and seeing if the gun was the one Gilbert used in his first national contest that he won,” museum curator Mary Dreier said.

If discovered that the gun was used in this contest, Dreier said Gilbert would have borrowed it from a family friend and used it when he won the American Championship DuPont Cup in 1895 in Wilmington, DL, with 25 straight kills and a shoot-off victory.

Expert Trapshooter
Born during a time when guns were used more as necessity than hobby, Gilbert become a firearms expert while learning wing shooting as a boy. His fame as a game shot became widespread amongst Dickinson County and later the region, as game hunting was also a mode of survival and an integral part of the diet.

An expert trapshooter himself, Tom Marshall, learned about Gilbert and visited Spirit Lake to hunt with the young gamesman. Gilbert’s name continued to spread, and he entered the national limelight at the DuPont Cup.

“It is such a neat story about Gilbert. To think this unknown boy could very well have become a national champ using a borrowed gun from a little community in Northwest Iowa,” Dreier said.

Another big victory for Gilbert took place in Kansas City in 1898 over J.A.R. Elliott, where the newcomer had to come from behind to win. Elliott hit his first 79, while Gilbert was down three. With only 21 to go, most people would’ve been discouraged. Instead, Gilbert never gave up and relied on stamina and determination. During the last 21, Elliott also lost three and Gilbert didn’t miss a shot, both men tying at 97. Gilbert won the shoot-off, despite standing at maximum distance of 33 yards.

In 1901, Gilbert was selected to the American team to tour Europe and England, which was when he officially recognized as the world’s champion trapshooter. He shot 10 runs of 100 straights during that year. Four years later, the famous trapshooter broke 392 straight targets over a period of three consecutive days. During another six-day stretch, he broke 1,178 of 1,200 targets for a .9812 average, and in a shoot at Council Bluffs, Iowa in 1908, he entered 197x200 the first day and 200 straight the second day.

In 1915, on the 20th anniversary marking Gilbert’s long stand as an expert trapshooter, hundreds of gun clubs in the United States held Fred Gilbert shootouts, with more than a million shells fired in his honor. Four years later, the top-notch shooter broke another world record with 591 straight targets. Later in the year, Gilbert won the rep championship at the Grand in Chicago, after missing two of his first hundred and then ran the final century to win with 198.

“Fred was known as the ‘Wizard of Spirit Lake,’” Dreier said. “He was one of the earliest members of the original ‘Okoboji Indians’ and was known among the scattergunners as ‘Chief Heap Talk.’”

Gilbert entered the world when shooting contests were one of the most popular recreational events. The “Okoboji Indians,” shooting group, often hosted shooting matches in Orleans, wearing costumes to their functions. Besides holding countless awards and records all over the country, one of Gilbert’s feats took place on the shores of Big Spirit, when he took accumulated shells from the past few years and broke 392 consecutive targets before he missed.

Famous Musical Connection
However, Gilbert was more than an expert shooter, he was also a “musician” and played the bass drum in the Spirit Lake City Band. One of his close friends was John Philip Sousa, a famous American composer and conductor. The two had an agreement that John would teach Fred how to keep a beat, while Fred would help John become a better marksman.

“They were really good friends. Throughout the arrangement, it sounds like John became a more proficient shooter than Fred did with understanding rhythm,” Dreier said. “Fred had a terrible time keeping a beat.”

The story goes that as the city band marched down the street, prior to playing, the bass drum would beat out the time. Right before the band would start, there would be a pause in Gilbert’s cadence and then two quick blows on the drum to start the music. Gilbert struggled with the pause, until Sousa taught him to bang the drum hard, spit on the ground, then quickly bang the drum twice just as hard.

“This is how Fred overcame his lack of rhythm and keep a steady beat for the band,” Dreier added.

So much history to be learned about people who once resided in Dickinson County. While Gilbert passed away on Aug. 8, 1927, the Dickinson County Historical Society and Museum provides a larger portal into his past. You can also learn more about Fred Gilbert by visiting the museum’s YouTube page and listen to John Smeltzer’s recent presentation, youtube.com/watch?v=GIbfBO-IZj0. 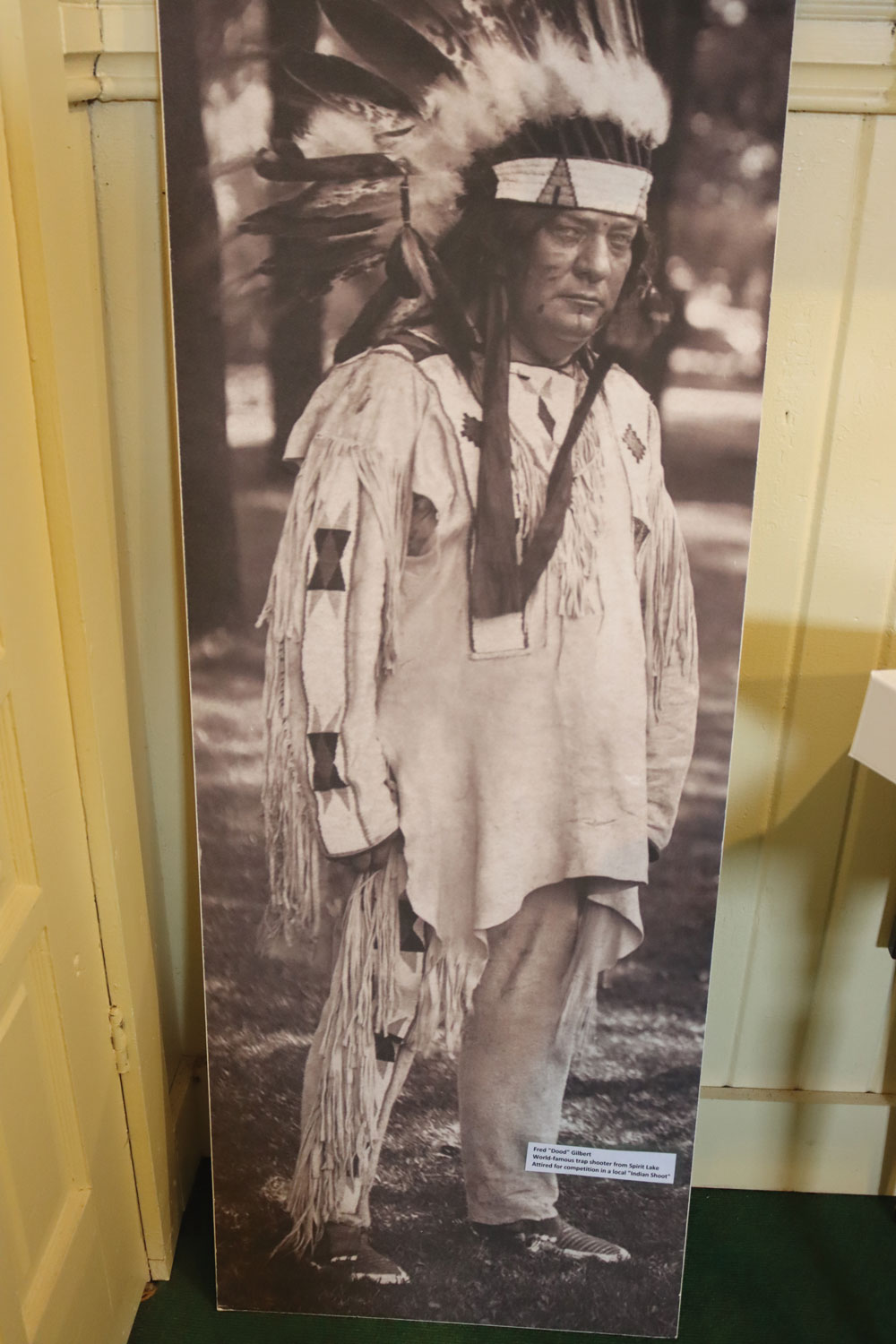