Back when my wife Erin and I got married in 2013, we were in our early 20s and figured we would spend a couple years just us. We bought our first home in Mason City that year and made sure to purchase a big enough home to raise a family, for when the time came. So, after four years of weekend getaways, vacations on a whim’s notice and making the most of our mid-20s—we decided in 2017 that we wanted to settle down and build the nest.

The nest, however, would not be in the home we were in. We spent many weekends driving over to Spirit Lake where Erin grew up and we always enjoyed the area. Seeing how much Erin loved being back home and how hard it was for us to leave, the decision was made that we were going to move to the Iowa Great Lakes to raise our family. We made the move in 2017 and bought a house in Milford!

We were ready to start a family! However, we did not realize the how difficult that was about to become for us. Month after month of doctor’s appointments and sheer heartbreak, our home remained quiet. Month after month turned into year after year and only those who have been through it or are going through it understand how devastating it feels.

We never gave up and decided we would do whatever it would take to make our dream of starting a family come true. After working with the amazing staff at Lakes Regional Healthcare, a million trips to the fertility clinic at Sanford in Sioux Falls, four years, three IUI’s and two IVF cycles later, on January 25, we found out we were going to be parents! A month later, we got even more amazing news—we were having TWINS! On May 14, we found out we were having a girl and a boy! We were so excited. Everything was perfect!

We had a goal to carry the twins to 36 weeks so we could deliver them here in Spirit Lake, otherwise any sooner we would have to make the trip to Sioux Falls as the twins would need additional NICU time. Despite all the worry and stress, Erin carried the twins to 38 weeks like a pro!

In the early morning hours of September 17, we loaded up the car and checked into Lakes Regional for our scheduled C-section as both the babies were breached. At 7:15 a.m., we experienced what could only be described as the most profoundly amazing feeling this life has to offer—hearing our babies let out their first cry. We welcomed 7 lb, 4 oz Molly Jeanette Rohlfsen followed by 6 lb, 12 oz Miller William Rohlfsen a few seconds later. All of the hardship, heartbreak and struggles of the previous few years faded away in an instant. They were finally here. We finally got to hold them. Our dream had finally come true. It was the happiest moment of our lives.

I am now a professional diaper changer and have achieved a new personal record for consecutive days without sleep, and Erin is the most incredible momma! It is hard to put into words how amazing it feels to finally be parents and to love something as much as we love our babies. We are so excited to be able to raise our family here in the Iowa Great Lakes and we thank everyone for their support these past few years.

For anyone going through a similar situation, Erin and I will both tell you it is absolutely worth it. It’s worth the cost; it’s worth all of the injections, the medication and patience it requires. “It’ll happen” is the last thing you want to hear because that’s all anyone says and it’s not how it feels when you’re going through it. Instead, I will say: “Don’t give up.”

Remember last year at this time? I was sharing the story of my wedding during a pandemic…and now we are here! Funny how fast time goes, whether you are ready or not! And a common theme throughout life thus far, “I thought we had more time.” 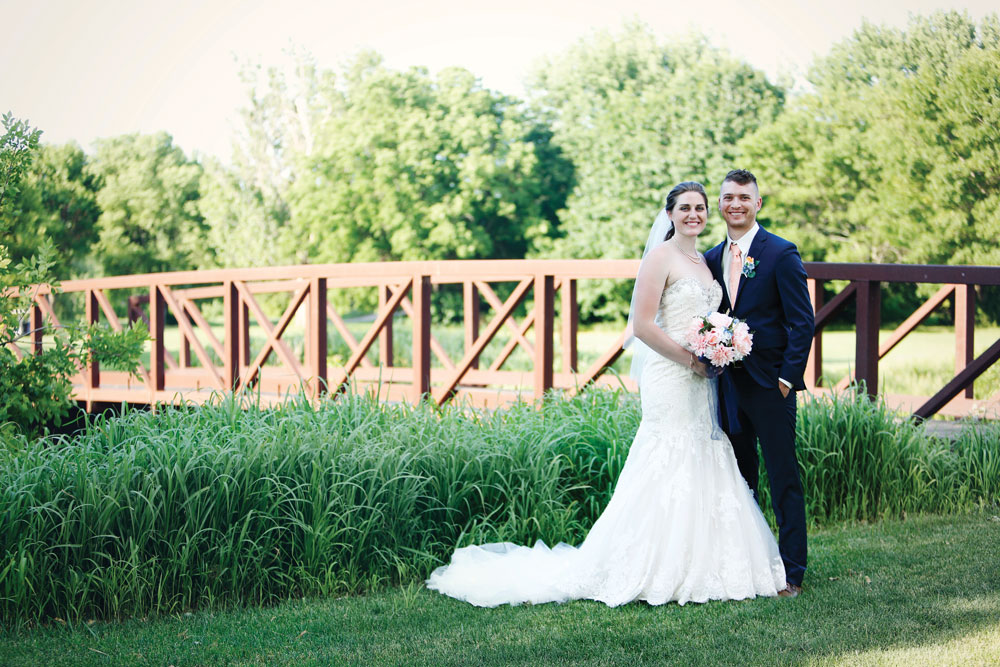 To say I was a bit nervous and quite a bit scared is an understatement. I thought we had more time! More time to enjoy just being the two of us. After spending so many years of our relationship in the long distance stage, I was ready to be in the same house and the same city as Tyler. We talked about all of the things we could do, just the two of us, but now we need to think about the three of us.

I am very fortunate that my pregnancy was uneventful, until the end anyway. No morning sickness, no medical issues, no worries on the health of the baby. Appointment after appointment we were in the clear.

At 18 weeks we had our anatomy scan where we would find out a “he” or a “she.” My sister, Dana, wanted to have a small gathering for a gender reveal so after the ultrasound technician had to fight with the baby to be able to tell miss or mister, we finally got the envelope with the results. There the envelope sat, on the kitchen table, taunting me it seemed. So after a sleepless night of it asking for a peek, I had to send it via mail or it would have been too easy for me to take a look.

At the gender reveal, we had a group of our family and friends gathered to share in the events. Upon arrival, you had to cast your vote by choosing a pink or blue mask—what a way to remember this time that we were going through! On Tyler’s side of the family, this is grandchild number one! Everyone was giddy with excitement to find out what the little one would be. As soon as Tyler’s grandfather walked in and took one look at me, he said, “You know that the Rosengren’s only have boys, right?” 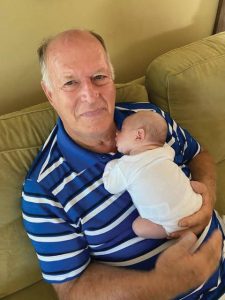 For my parents, this would be grandchild numberthree. Two boys already, so I was praying, with every ounce of me, for a girl to help even the score, you know? Only sounds fair! But as soon as we hit that balloon with the syringes and I saw that blue confetti fly, I knew he would be loved regardless and he would fit right in with “Grandpa’s boys.” And I guess Papa Doug
was right, Rosengren’s have boys.

As we neared the summer months I made a mental note, I was NOT going to be 25+ months pregnant during the hot months again, if we can try anyway! Seemed like the days were slow but the weeks went fast. One, two, three and suddenly I was 35 weeks. The downhill slide! Thank goodness. Appointments continued going smoothly until week 36, when there started to be signs of pre-eclampsia. After some extra testing over the weekend, the doctor called me on Monday afternoon and asked if I could come into the hospital for more monitoring to make sure that everything was still ok. I guess some number he saw on my charts or tests he didn’t like. But there were still almost three more weeks to go. We have more time before this baby comes.

I did have the nursery ready and I had the car seat installed, but was I, myself ready? NO! The “go bag” that they talk about, hadn’t packed that yet. I thought we still had so much more time before needing it. As I walked into that appointment at the hospital at 36 weeks, 6 days, I was all smiles and no worries at all. But as soon as I got to the birth center and saw the concern on the nurses faces as I walked in, a bit of panic set in. After monitoring was complete and everything was still ok with baby, the doctor came in and told me to be ready. Ready that this baby could come within the next week at the latest. Yikes, I thought I had more time! I wasn’t ready!

After another hour of monitoring and calling Tyler while he was at work, telling him that I was now located in a labor and delivery room, I think it finally hit him as well. That time we thought we had, is now for sure gone. The doctor told me to plan on not leaving, I looked at him and said “I have plans this weekend,” and I did. I had planned on going back to Le Mars and attending the Plymouth County Fair. I don’t think I had missed a fair in my entire life. But with my blood pressure through the roof and baby’s heart rate did not like being on the meds I was hooked up to in the room, doctor decided that it was in both of our interests to induce. After a stressful night and almost having to do an emergency c-section, we welcomed Wyen Reid Rosengren into our lives at exactly 37 weeks. Weighing 6 lbs, 3 oz and 19.5” long, he was PERFECT. I thought I knew love, and I thought my life was complete after getting married and having that special someone by my side, I was wrong.

The time that we thought we had may just end up looking a little different now, but we are thankful for our baby boy. And he is so lucky he gets to be a part of the Lake Life family!