“Greetings from Jackson!” This colorful mural placed on the south side of the Senior Dining Center welcomes guests entering from the south. The bright colors illuminate the seven 4x8 panels, representing what many love and know about their community.

One of four interactive murals designed by local artist Blaise Jacobsen and organized by the Jackson Center for the Arts, these bursts of color have brought much delight to visitors.

“We wanted this particular mural about Jackson to represent a post card, with each letter filled with meaningful characteristics,” said Cay Gjertson, Jackson Center for the Arts Board Member. “The idea behind the project is for people to interact with the different pieces of art, while bringing visitors to enjoy our restaurants and businesses.”

Jacobsen then brought to life their thoughts, drawing each mural on Nudo Sign Panels. These panels allow for sign paint and is similar to the paint used on cars, providing protection from the outdoor elements. Within each mural, he constructed a color by number concept, allowing for ultimate involvement from the community.

“I really liked getting the art pieces drawn out and then watch them come to life. It was fun to get the pieces back after the community painted them,” he said. “Then I put the finishing touches and cleaned up spots. They turned out great. It was a cool process I would never have tried before.”

Throughout the months, people from the community came and visited the Jackson Center for the Arts. They would look for which paint matched a specific number and were given a paint brush.

“We wanted to include as many city residents as possible, as the entire project was designed to involve the community and bring business to downtown Jackson,” Gjertson explained. “At each mural, there is a sign that lists everyone who contributed to that specific art piece.”

The first mural was completed June 2021 and placed at the library, drawing young and old to the nearby bench. The whimsical blue dragon looks ready to peer into a nearby book or give a lick to a young reader. The second interactive mural is an umbrella with colorful water lines and was completed by the Southwestern Minnesota Arts Council this past fall.

The third mural is the Jackson Postcard and took Jacobsen much of the summer and fall to complete.

“Inspired by vintage postcards, there was a lot of sweat and hours that went into this mural,” he said. “I tried to put as much of what personified Jackson into each letter. When you’re making something this big and it’s going to be out in public for everyone to see, you take your time and do your absolute best.”

The last mural is displayed amongst the playground equipment at Ashley Park. Watering cans and pretty flowers engage many young imaginations.

“For all the murals and paintings, the picture isn’t complete until you are in it. This is what makes the artwork so much fun,” Gjertson said.

There are 12 beautifully designed interactive paintings displayed throughout Jackson businesses, created by Jacobsen and another local artist Gayle Moore. Each piece is specifically painted for the business and draws visitors through each door. Murals were mounted by EyeCandy Signs.

“It is such a fun project for Jackson and it’s so cool in how it brings people to the area,” Cosmos + Clover Boutique owner Sharon Henning said. “Each piece is so witty and coordinates with each specific business.”

Since it can be a challenge to complete a larger than normal painting, both Jacobsen and Moore spent considerable time thinking about how each painting would take place.

“It sometimes took a little bit of time to figure out how to do the paintings, but once I got an idea, I jumped in with ‘both’ feet,” Moore shared. “Like the Art Center’s painting, my goal was for people to feel like what it would take to paint a picture.”

“I also find abstract art fascinating, which I was able to bring into Virginia’s Norwegian background,” she added. “It’s hopefully fun for people to interact with the forest fantasy.”

When Jacobsen designed “Lloyd’s Lunch Break” for Kat’s Hog Heaven, he painted it in honor of his Grandpa Menk, who had passed away this past summer.

Owner of the R.E.S.T. Stop Health Spa Heidi Turner especially appreciated the interactive piece Jacobsen painted for their wall. “We love art, and it was so nice to have a different piece in here,” she said. “A lot of visitors come in and interact with the painting.”

Another favorite of Jacobsen’s was “Grandfather” and is displayed at Santee’s Crossing. Starting as a sketch inspired by the Mankato silo mural project, the piece is painted on a very large canvas prepped by Jacobsen’s middle school art students.

“This painting is close to my heart, being part Lakota Sioux. My grandma said that my great, great grandpa would be proud,” he shared.

The entire interactive art walk experience has become a way for both Jacobsen and Moore to give back to a community they love, pouring their hearts into each specific piece.

Interactive Art Walk Artists:
Blaise’s art background began as a child and has been influenced by family, friends and former teachers.

“It’s always been a positive part of my life growing up, but it didn’t always come naturally. I would often spend hours a day drawing, trying to get things right,” he shared.

During college, he moved into painting and graduated with his BFA in art education, with a painting emphasis. Jacobsen later went on to get his master’s degree in Painting at MSU-Mankato. He feels blessed with opportunities to illustrate four children’s books and has been part of numerous graphic design and illustration projects.

“I’m always doing something in my arts – it’s just part of my everyday life,” he said.

Like others did for him, Jacobsen also passes on his love of art to the many students who walk through his door every day at Jackson Middle School.

Born and raised in Jackson, Moore calls herself “the Art Gypsy” since she enjoys all types of art mediums. From painting and sculpting to beads and wire, Moore tries it all. Her art classes also range from “Bob Ross” style and watercolor to acrylic and oils.

“As a child, my parents kept me busy with anything using my hands, whether it was airbrushing or creating art with cloth or yarn,” Moore shared.

A painting and drawing instructor at Jackson Center for the Arts, she calls art her therapy.

“Making a mess is very relaxing for me,” she said.

She feels blessed to have had several pieces of her art displayed locally in places like Worthington, Okoboji, Fairmont and Jackson.

“My belief is that everyone has artistic ability—you just have different talents!” Moore said. “And it’s possible, you haven’t brought it out yet!” 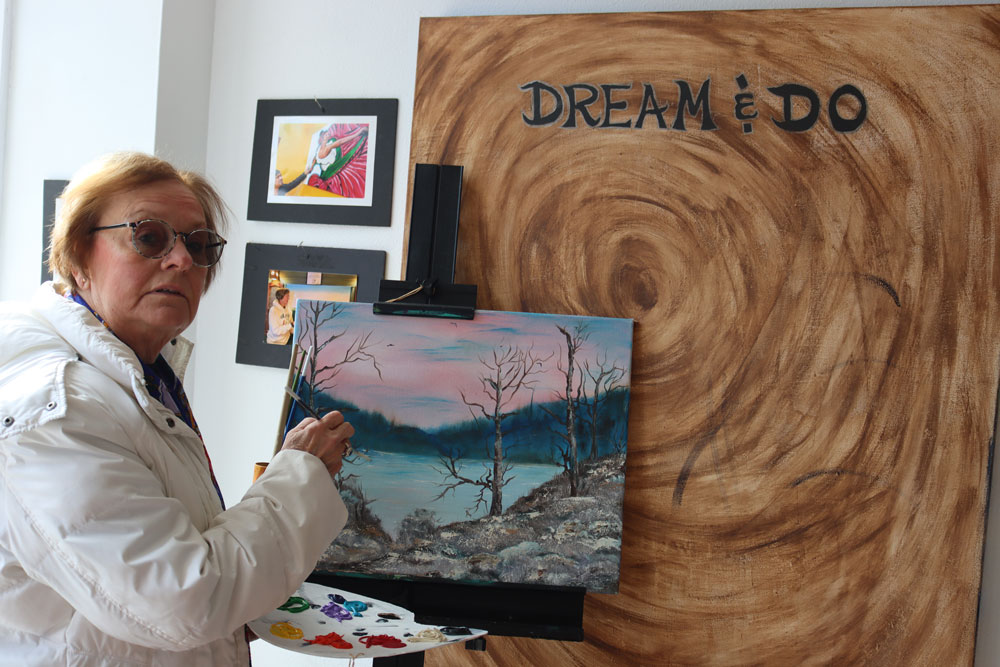 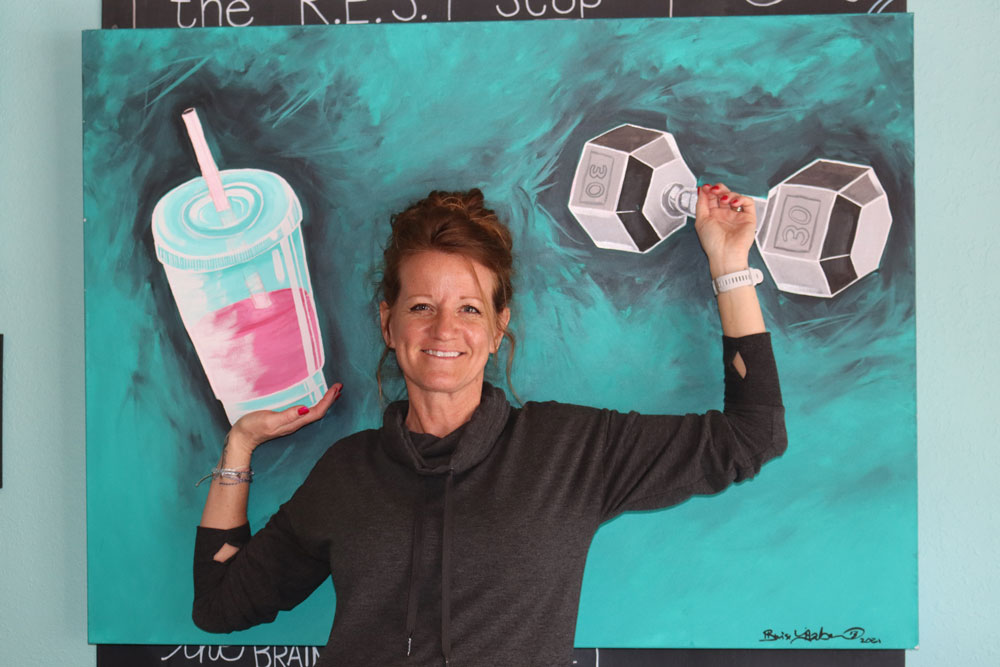 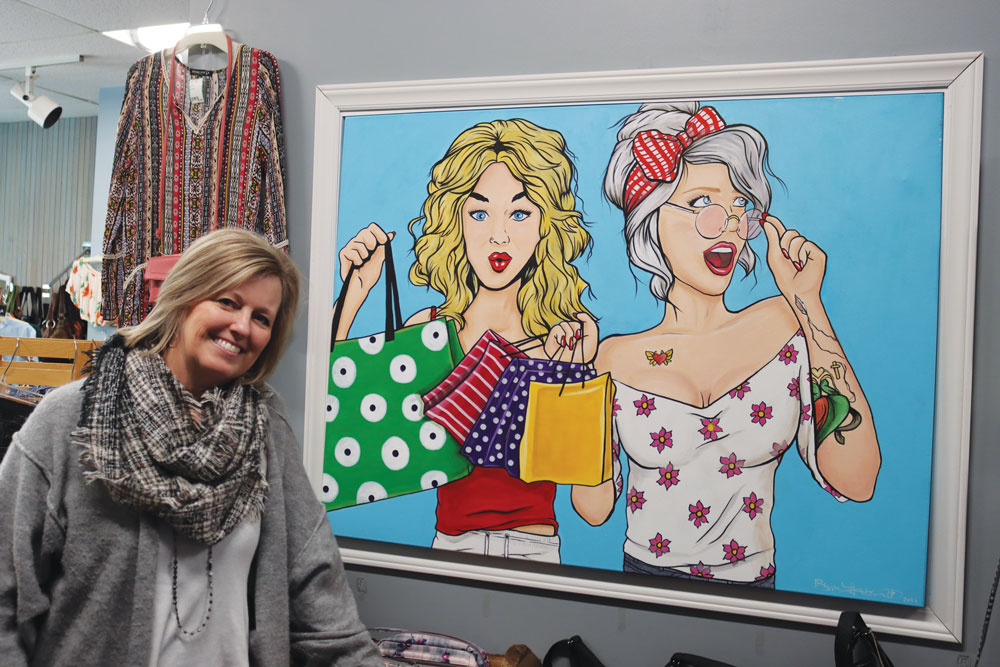 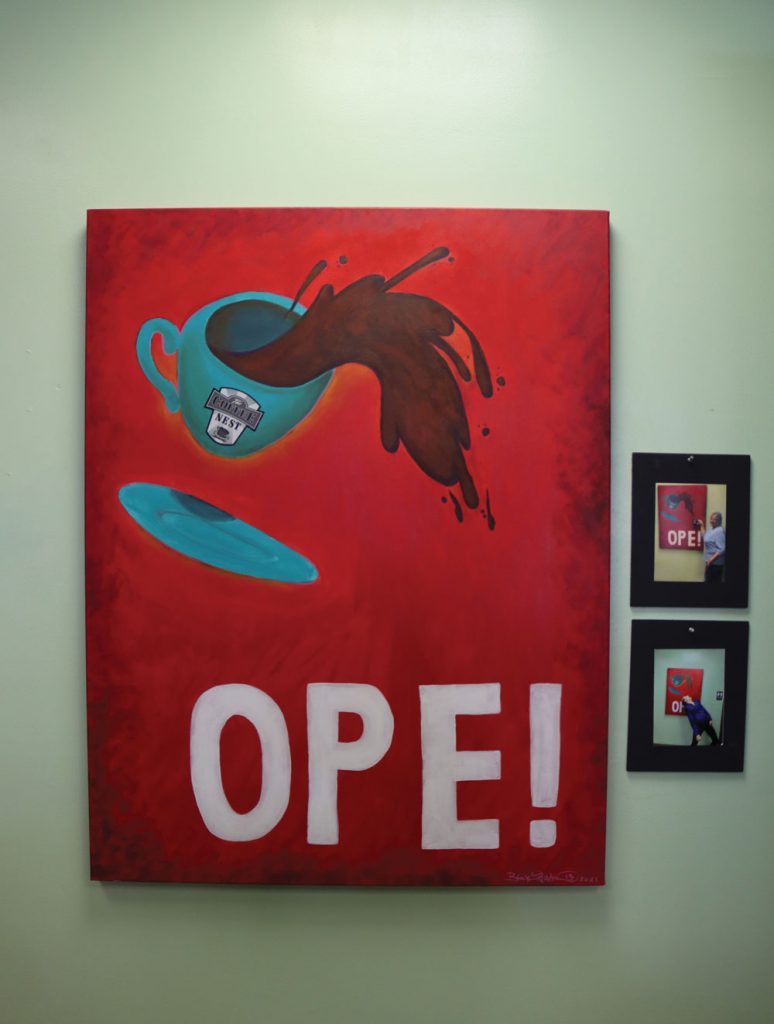 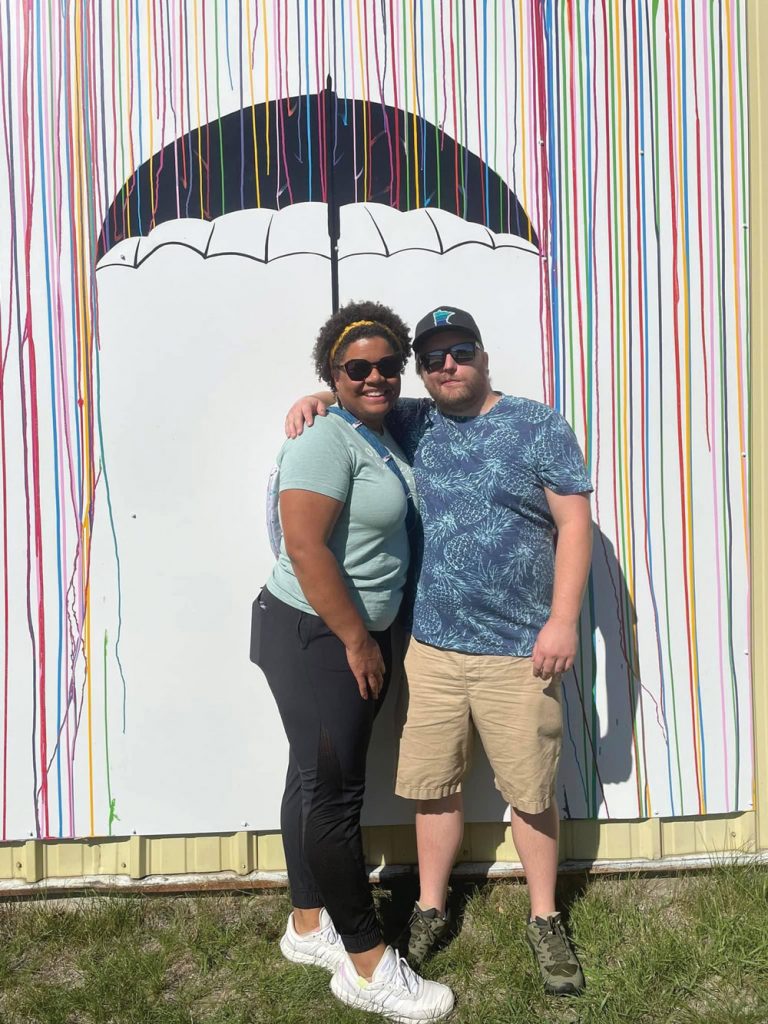 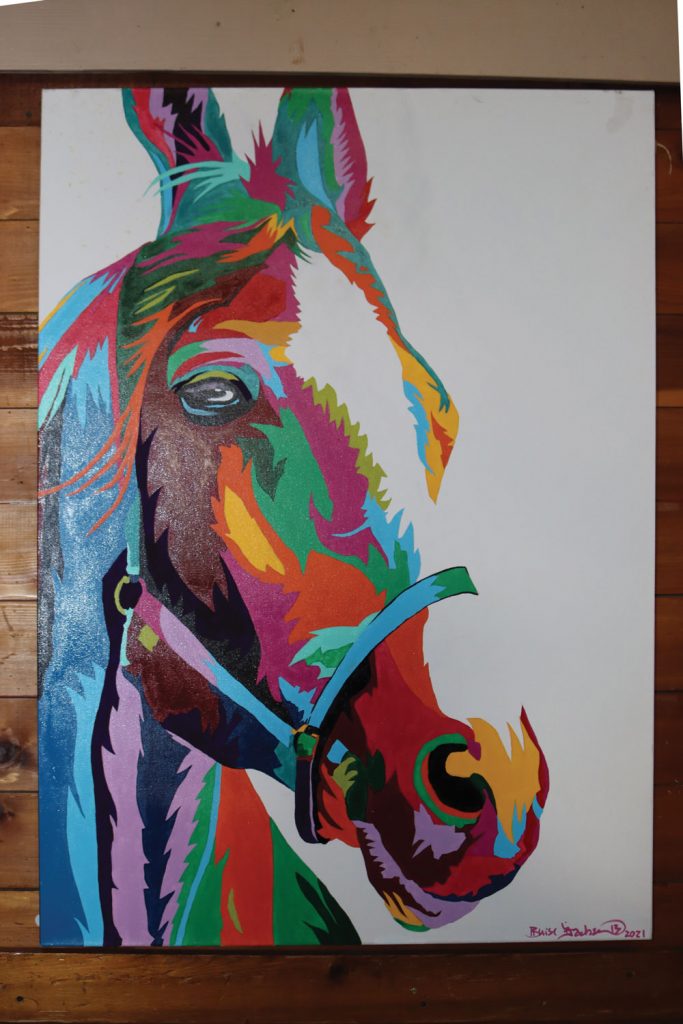 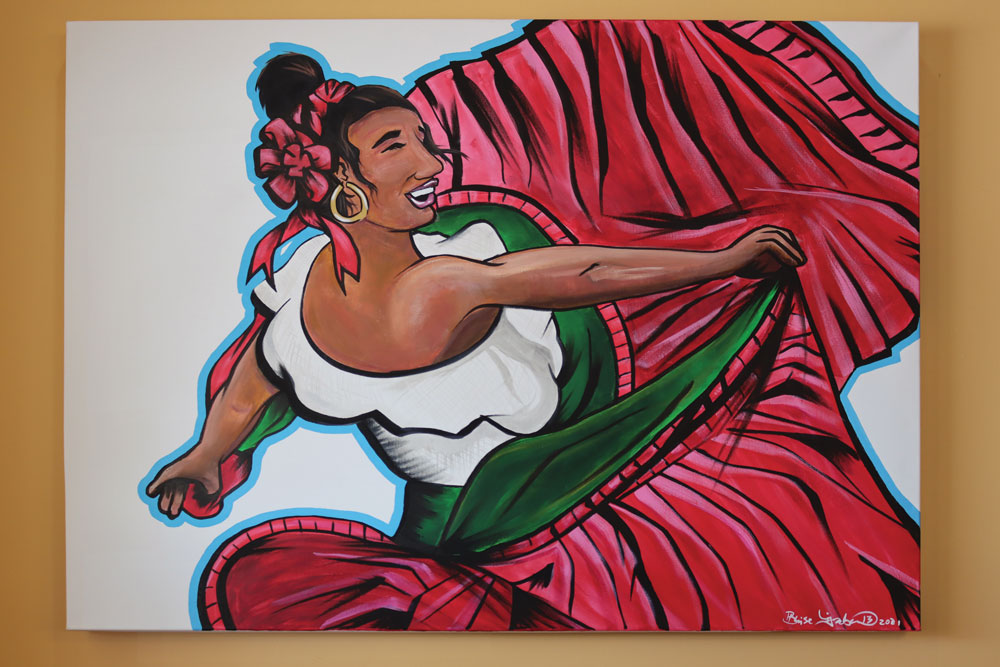 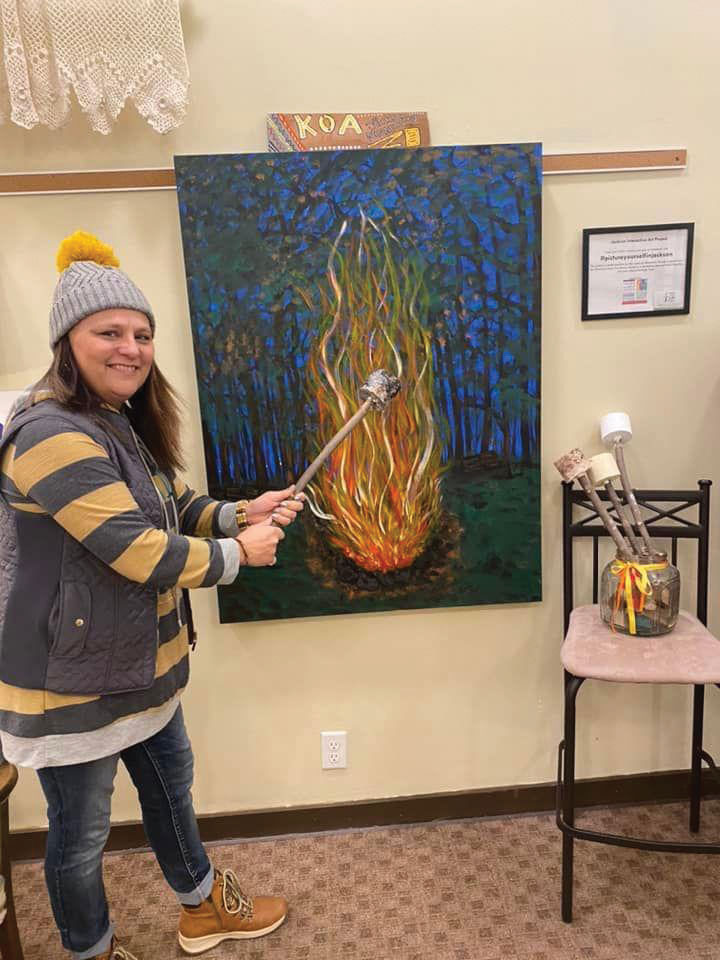 Jackson Center for the Arts opened in downtown Jackson in 2016. A non-profit 501c3, they mostly operate from grants and donations. The art center offers all types of art classes and provides space for music groups, Spanish classes and crafts such as sewing and knitting.

The back art room is always busy, and the Art Center has classes for all ages, providing avenues for anyone who would like to share their artistic gifts.

“We have everything from scrapbooking to painting,” Gjertson said.

Jackson Center for the Arts is a fiscal sponsor of the Riverside Farmers and Makers Market, held every Thursday from 2-5 p.m. from May 26-Sept. 15. Every week, the art center brings in local and regional music, as well as offers different art classes for all ages.

On the last Thursday, they will celebrate Spanish Heritage Month by sponsoring a seven-piece Hispanic band from the Cities, while also hosting a salsa competition.

“Last year, we held our first salsa competition, and it was very successful,” Gjertson said. “People enjoyed judging the salsas by tasting and voting in the competition.”

Besides the Farmers Market and Interactive Art Walk, the Jackson Center for Arts is excited to work with Jackson’s task force to further the love of art within the community; this includes applying for a $20,000 grant from the Southwest Minnesota Arts Council.

“We are currently listening to ideas and making decisions on how to best use the funds,” Gjertson shared.

She’s also excited about Dave Schmidt’s upcoming history project, which she feels is the perfect addition to the interactive art walk. Once complete, QR codes will be displayed on downtown buildings with a compilation of Jackson’s in-depth history.

“Our desire is to share our love for our community with others, bringing people together,” she said.

Watch their Facebook page or visit their website at jacksoncenterforthearts.com for event updates or upcoming art classes.