Boji Surf Co Embodies the Okoboji Boating Lifestyle
Splashes of water rise high into the air, the board skimming over the surface, twists and turns and a thirst for another peak. The thrill of riding the crashing waves entices many water enthusiasts!

For Rob Rodriguez, owner and founder of Boji Surf Co., wake surfing has become a personal favorite but also a passion he loves to share with others.

“When I first started to wake surf, I thought this is the best - the first time hooked me forever! But when I started to teach people, it was even cooler to share this love with others,” Rob shared. “I have found I really enjoy teaching people how to wake surf, especially at Okoboji.”

What was once only considered an ocean sport, wake surfing has quickly become one of the fastest growing water sports and has provided an outlet for surfers on smaller bodies of water. With the aid of a wake surf board and a wake boat, a rider trails the boat, riding the boat’s wake without directly being pulled by the boat. After getting up on the wake, often with the aid of a tow rope, the wake surfer will then drop the rope and ride the steep face below the wake’s peak in a manner similar to surfing. A wake surfer will generally use a special wake surf board.

Another difference from regular surfing is the use of a wake boat, as it’s specially designed so that the propeller is away from the swim platform and away from the surfer. Newer boats use a ballast system to add weight and allow for water to be sucked towards the center, which then fills the port and starboard sides, middle and front. The tabs or gates, push the water out to create a three to four-foot wake.

“When there’s a good wake, you will see everyone smiling,” Rob said.

On many warm summer days, Rob enjoys taking all ages out for a wake surf lesson.

“Depending on the time of year, it’s best to go out when it’s not as busy or visit a bay with less traffic,” he explained. “You're going to start out with a rope, and once you learn how to catch the wake, you'll be asking to go one more time, I guarantee it!”

A common tip Rob gives during lessons is the correct way to stand on the board, as it’s especially important to keep the weight on the front foot or you will fall off the back of the wake.

Besides Rob, his son Karson also helps with wake surf lessons. Most of the time they will take the wake surfer out on their wake boat, teaching them the basics of how to surf but also the appropriate ways to drive a wake boat for a wake surfer. His good friend Jeremy Mouw also assists with lessons and will partner with Rob in taking bands from Captain’s Getaway out on the water before a big show.

“This dream started with my son. In 2015, we were sitting in our wake boat and talking about how cool wake surfing is. He was 14 then, now he’s 21 and we still love to get out on the water,” he shared. “It’s an Okoboji lifestyle for us!”

“Tyler comes down every summer to surf Lake Okoboji and shares his talents with others,” Rob said. “He’s a phenomenal surfer who makes a 360-look super easy. He can jump right onto a wake surf board without a rope and can land any trick you can think of. He’s one of the best, really the next level, and I appreciate his willingness to spend a week at Okoboji to give lessons. He's a great kid”

This love of the water is what draws Rob out to the lake many days, even in colder temperatures. It isn’t uncommon to find Rob, Wade Dixon, Kyle Hamilton, and Drew Hage out wake surfing or wake foiling – even in December if the lake is still open.

“That was fun and a little crazy. Kyle had his boat summerized in the dead of winter, and wetsuits were pretty much mandatory. It was a memory we will always remember, wake surfing right by huge ice chunks in the water,” Rob said. “We also go surfing together during the summer months too, those guys never stop.”

Boji Surf Co. is Branded
At the same time Rob was becoming captivated with wake surfing, his creative side was mulling a new design. He spent some time putting together several sketches, with his first design capturing a picture of a wake boat going out into the colorful sunset. Popping that colorful vintage look on clothing was the start of Boji Surf Co., and what Rob considers a lifestyle brand for anyone who lives for the Okoboji lifestyle.

“The water is really one of the best things, whether you’re out there floating or out on a board, it doesn't matter. There are no worries when you’re on the water and Okoboji is just a fun place to be,” he said. “People visit from all over and they are amazed at our community. They love the 60’s nostalgic atmosphere and being around friendly-good people. This lifestyle is what I wanted to encompass in Boji Surf Co.”

After starting out with an Instagram page and selling apparel online, Rob realized his new brand was gaining popularity.  In 2020, Rob decided to branch out and opened in the heart of Okoboji, in a small building on the east side of Highway 71, he calls it the 'Shred Shack.'

“I wanted to really focus on Okoboji and selling local, as the brand was also selling well online,” he added.

While Rob’s first logo is the most popular, he has created multiple other designs through the years. He shares his Okoboji lifestyle brand on hoodies and t-shirts to hats and wake surf boards. He usually carries two brands of wake surf boards, both higher end boards. One is Tyler Stewart’s Kanuk brand, and another is a wooden board called Shore Board with hollowed out wood, which are both skim style and slimmer compared to the surf style that is thicker and bigger.

“We will gladly help anyone looking for a new board that's just starting out. There are many different price ranges, so if you are looking for a certain board, I will send some interested people to Oak Hill Outdoor for a different option to choose from,” Rob said.

“Okoboji is just special. I’ve been to a lot of different places and to different lakes and there’s just something special about this area,” Rob shared. “My goal is to share this lifestyle locally and then bring the Boji style to other lakes.

Boji Surf Co. will be open every day between May 13 through mid-October at 290 US HWY 71, Arnolds Park, IA 51331. Contact Rob on social media or bojisurfco.com for inquiries for wake surf lessons or Boji Surf Co. merchandise. 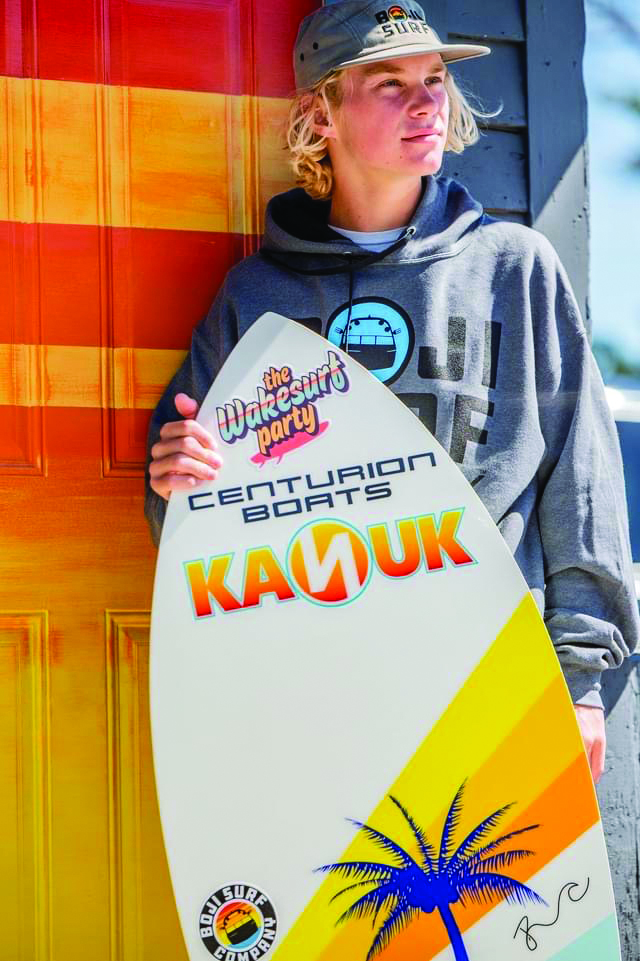