Templar Park Once Home to a Grand Resort for the Templar Knights of Iowa
For those driving along the west side of Big Spirit Lake today, it can be hard to imagine the splendor of days past. Many areas once visited by thousands hide their treasures beneath prairie grass and old Burr Oak trees. Quiet beautiful landscapes along the lake are now used as fishing holes, camping sites or have become boat launches.

While still enjoyed by many different people, these same land parcels once hosted grand occasions where young and old gathered to relax and enjoy life. Like many places, one quiet piece of land is often missed today. If observant, a viewer may question the large archway reaching out of the grass or have heard of rumors of large elaborate buildings.

Templar Park Recreation Area has been owned by the Iowa Department of Natural Resources since 1982 and is a favorite spot for a quiet picnic or fishing in the nearby lagoon.

But for 75 years, the 10-acres was visited by thousands of families for a summer vacation and once showcased the impressive Summer Home for the Knights Templar.

Transformation of Farmland
As the area was beginning to grow in the late 1800’s, Spirit Lake was becoming more than just a place to settle. The railroad was entering the community from different directions and bringing in people from around the region.

The Orleans Hotel was one of the first ornate resorts in the Iowa Great Lakes area in the late 1800’s. Located near the current Spillway Drive In, the hotel served the general public and was situated near a Burlington Railroad stop.

“People came from different states to enjoy life in the Iowa Great Lakes. Antlers Hotel and Orleans Hotel were one of the first larger, grandeur hotels in the area, predating most anything on West Lake Okoboji,” said John Smeltzer, board member of the Spirit Lake Protective Association. “However, there was a continuous effort by the community to spur growth. Around 1884 is when you first start seeing things talked about Templar Park.”

What was first known as Kingman Point on Big Spirit and owned by Alvarado Kingman, the prime piece of lake property became of interest when the Grand Commandery of the Iowa Knights Templar began searching for a resort amongst the lakes to serve as a summer outing ground for the members of their order. Members of Spirit Lake and the railroad approached Kingman to purchase the 10 acres and then donated it to the commandery.

“At this time, the Iowa Knights Templar was growing by leaps and bounds throughout the State and people wanted a place to vacation,” Smeltzer shared. “They received this gift of land with open arms and their first encampment on the Hill took place with tents in 1890. However, many of the people stayed at Orleans Hotel that year and the Queen I took the guests back and forth across the lake.”

In a year’s time, the first building was built upon Templar Park and included offices, a dining room and a conventional meeting type room. The two-story structure included verandas and a small kitchen, but little residence for guests.

A severe windstorm or what some called a tornado came through in 1898, destroying the first structures on the property. In a year, a larger three-story resort with 150 rooms was built out of wood. The building expanded and consumed the entire ten-acres overlooking the lake.

At this time, the lake experienced a period of low water depth and the Queen I was moved to West Lake Okoboji. The Orleans Hotel was closed for fear the lake would disappear.

“Big Spirit Lake has a nice shoreline but it’s wind swept. The other issue is the prairie lake has fluctuations of water through the years, so in this period, the lake level was down around nine feet and residents were fearful that the lake would disappear. In comparison to West Lake, which is 135 feet,” Smeltzer explained.

Tragedy also struck the Templars in 1917, when a large fire began in the wood structure and consumed the entire property and at least 200 trees nearby. The Templars rebuilt once again, and opened in 1919, with a beautiful new concrete building with Spanish tile and stucco.

“I compare it a little to the story of the ‘The Three Little Pigs,’” Smeltzer said. “Each building was like straw, wood, and brick, and they didn’t want this building to be burned or blown down.”

The white walls and red tiles on the roof were striking. Windows were arched, as well as architecture throughout the property. The social center of the entire park was maintained in the rotunda of the main building, which was 40x80 feet and two stories high. All rotunda porches were glassed and screened in, while heating was provided by a furnace and large fireplaces. The main building was over 300 feet in length, with three floors having 150 identical rooms in dimensions, equipment, and ventilation. The dining room was grandeur and on the main floor of the north wing.

There was also a large Pavilion type building built down by the lake, allowing for a larger meeting space and social events.

In these years, a Grand Staircase was built to the lake and images of people enjoying the beach can be found. There was a wooden slide on one side, with different pictures showing the fluctuation of the lake water levels.

“People were doing summer stuff just like they do today in the area,” he said. “However, Knights Templar wasn’t open to the general public; the hotel was operated for the exclusive privilege of every Knight Templar in Iowa.”

The Knights Templar expanded the property to the north and south, what is now called North and South Templar Park. There were 30 summer cottages built for employees or prestigious members of the group. At times, there would be 500-600 people coming to visit via train or by wagon.

In 1909, there are pictures showing a two-track road into Templar, with marsh and swamp on both sides. By 1926, the road is changed and some of the land dredged to fill in the swamp, and a three-hole golf course and parade grounds were built for the Knights during their conclaves. Later, a nine-hole course was developed on the grounds. In 1953, 30,000 yards of dirt was brought from across the road to fill in the south marsh.

Meetings were held in the morning and the afternoons were spent in social entertainment. A dress parade was often held by the Knights in full uniform on the parade grounds, with the Spirit Lake Marching Band often joining them and sharing their talents.

“Templar Park was quite a place for many years and the entry arch to Templar Park is still there,” Smeltzer said.

In the later years of Templar Park, it was opened to the public and the dining room was the place to visit. The floors were black and white tile, and the room would be packed with people, generally dressed up and enjoying a live band. Problems began to arise in the late 1960’s, when they realized the buildings needed care.

“By this time, people had grown accustomed to electricity and desiring bathrooms in their individual rooms. There was also no air conditioning, but while still very grand, the design was becoming too expensive to provide the needed upgrades,” Smeltzer explained.

The property fell farther into neglect and was closed in 1972. In 1977, the Knights Templar was sold to a local citizen, with the main hotel demolished the following year. The Iowa DNR purchased the property in 1982 and turned it into the Templar Park State Recreation area, with a boat ramp, picnic area, and dock access. Since that time, a handicap fishing pier and additional parking has been added near the boat ramp in the quiet lagoon.

While much of the property was buried beneath the parking lot, a few items remain of historical aspect of the original Templar splendor – the archway and the Grand Staircase.

The SLPA has plans to partner with the Iowa DNR to continue to improve the park and make it welcoming to visitors.

“We are looking for ways to improve the area, so people can see the lake and protect the shoreline,” Smeltzer said. “SLPA wants to protect this public access for people on the lake.”

Some of the ideas is to replace the dock and help repair the lagoon. There are ideas to add more walkways, so the public can gain access to parts of the lake, especially during the winter months. SLPA also continues to host the July 3 fireworks display every year.

“This is the first time since the 1970’s where we’ve filled the barge, which is so exciting. It’s all done on the back of individuals,” Smeltzer said. “People can enjoy the fireworks by coming to Templar Park and enjoying the festivities.”

If interested in partnering with the SLPA in the renovation of Templar Park, contact Smeltzer at johnsmeltzer@comcast.net. 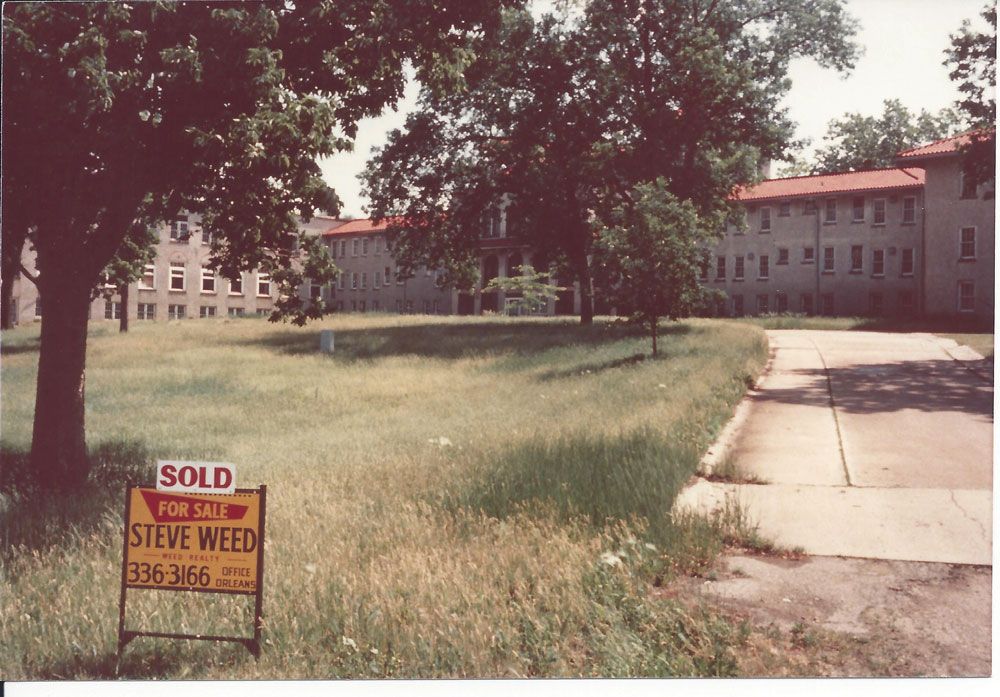 Any of these projects could be chosen for completion based on interest and support; they are not listed based on priority. SLPA considers all of them as opportunities for the Templar Park project.