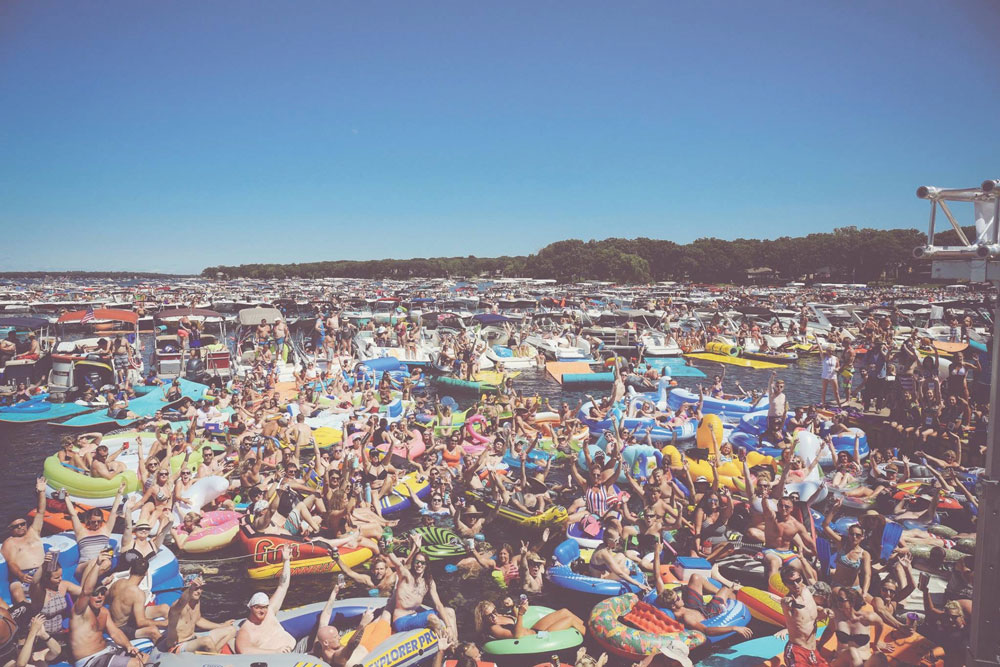 Growing up on Miller’s Bay, Damon loved music but saw himself more as a sports guy. He played the drums all the way through school and found success with Okoboji’s award-winning jazz band.

“I loved the drums, but you can’t take the drums into a dorm room,” he said with a laugh. “I didn’t really pick up a guitar until that point and then just keep practicing. The first song I wrote was during my sophomore year of college and it was terrible, but I kept at it and just had fun with music.”

Damon graduated from Okoboji High School in 1998. After a trimester at Briar Cliff, Damon transferred to Dordt College in Sioux Center and pursued a physical education degree.

Four years later, he graduated with a teaching degree and spent a year substitute teaching in Sioux Falls. He started putting feelers out and picked up some music gigs around town and in Ames, IA. During the summers, he spent time working and playing music around Okoboji.

In 2003, the Java Joint was often the place to be, and Damon said owner Nancy Cain was super supportive.

“She gave my baby wings a chance to fly,” he shared. “I also played some shows at the The Ritz. I was so eager to play anywhere and anything, but at that point, I didn’t realize people wanted a four-hour long show. I must admit there were times I played ‘Jack and Diane’ four to six times a show.”

Starting his way from the bottom and working just about any event thrown his way, Damon quickly became a star on the Midwest music scene. Many listeners consider his voice reminiscent of Dave Matthews & Coldplay.

It didn’t take long before Damon was apart of Rock the Roof concerts at the Roof Garden, or his band was headlining the July 4th evening concert at Preservation Plaza. In 2006, he had the idea to have a concert on West Lake Okoboji on a barge.

At the time, Damon had no inclination LAKE AFFECT would become an annual event. He said few people came the first year and he didn’t have any sponsors. By year six, he realized the idea had become an event people looked forward to every July 4th weekend. Now, they are playing in  their 15th LAKE AFFECT.

“LAKE AFFECT grew all on its own. The idea was to try something extraordinary, and we are fortunate enough to live in an area where anything in possible,” he said. “My original idea was to bring people together to celebrate music and the spirit of this tiny resort town in Northwest Iowa. I’m humbled that it has grown to be one of the region’s most anticipated events of the summer.”

Music Opportunities
After 10 years enjoying the Midwest music scene, Damon had the opportunity to showcase his musical skills in Nashville.

He said his time in Nashville stretched him as a person and musician.

“I’m really glad I did it, as it was a good experience, but it really stretched me,” he shared.

At times, a musician had to wait hours to play three songs for an audience. It was difficult to make money, especially if you wanted to share your original pieces. He said he’d come back to Iowa once a month to play in shows to help pay the bills.

“There are so many amazing, fantastic musicians in Nashville, who wish they could get paid to play music. This is when I realized that I don’t have to be in Nashville to share my love of music. I learned that I already have those opportunities back in Iowa and it was good to come back home,” he said.

After his two-year stint in Nashville, Damon became a full-time musician based out of Des Moines. Playing in over 180 gigs a year, his music has taken him to county fairs and neighborhood bars to outdoor festivals and wineries. He’s played in countless venues: Minneapolis, MN, Mankato, MN, Okoboji, IA, Lincoln, Ne, Chicago, Illinois, Iowa City, IA and many more. He has also opened for performers like BB King, Willie Nelson and The Beach Boys.

“My favorite place will always be Okoboji, as that’s where I got my start!” he added. “I also have really loved the Des Moines musical community; I never would have dreamed I would play and live in the Des Moines area. I’m super grateful for these opportunities.”

Being only three hours from Okoboji allows Damon to come back home throughout the year for different shows or private events. Sometimes he plays solo, while other times his band joins him.

The Love of Music
Ever since Damon wrote his first song in college, he has loved how music connects people.

“I love how both sports and music are universal in how they bring people together – whatever background you come from,” he said. “Music is a language connectivity that reaches out to people across the board.”

Damon often has a song rambling around in his brain. He can be going down the road and his wife knows when a song comes to mind, as he starts to mumble out a melody and words spill out.

“I get really fired up and excited when a song writes itself,” he shared. “I really just have to get out of the way. However, sometimes the song comes out at the weirdest times.”

Damon has written and recorded four albums, including “stars & bars,” “Atmosphere,” “Tumblin’” and “Live @ Fireworks Café.” At concerts, he plays a mix of originals and covers, some new songs and others old.

“I love playing my original music as much as possible,” he says. “When we play covers, it doesn’t sound like the original as we put our own spin on it.”

Even more exciting, Damon has twenty new songs that haven’t been recorded yet.

“I’ve tested the waters at some solo shows and gotten a nice response from the audience,” Damon shared. “I hope to have time to go to the studio to record in the near future and have a new album out by Christmas.”

“I love all these guys! Not only are they amazing musicians, solid dudes, but they have their own unique character that makes our time together as a band fun,” he shared. “They are all great friends.”

Brian Moore  •  Saxophone, Keyboards, Vocals
Originally from Okoboji. Resides in Minneapolis now.
We have played music together since I was in 7th grade.

Danny Grause  •  Lead Guitar, Vocals
Ames, IA. Played together since I moved back from Nashville in 2014.

“I’ve had the opportunity to play with our saxophone player since high school, so he must really like to be around,” Damon said. “I really think the sax sound makes a song complete!”

Wherever you hear the Damon Dotson Band during the year, the music is guaranteed to bring a smile. The band headlined the 15th annual LAKE AFFECT or will be showcased at the Okoboji Store several times this summer. For more information on booking Damon Dotson or his band, visit Damon Dotson Music on Facebook.